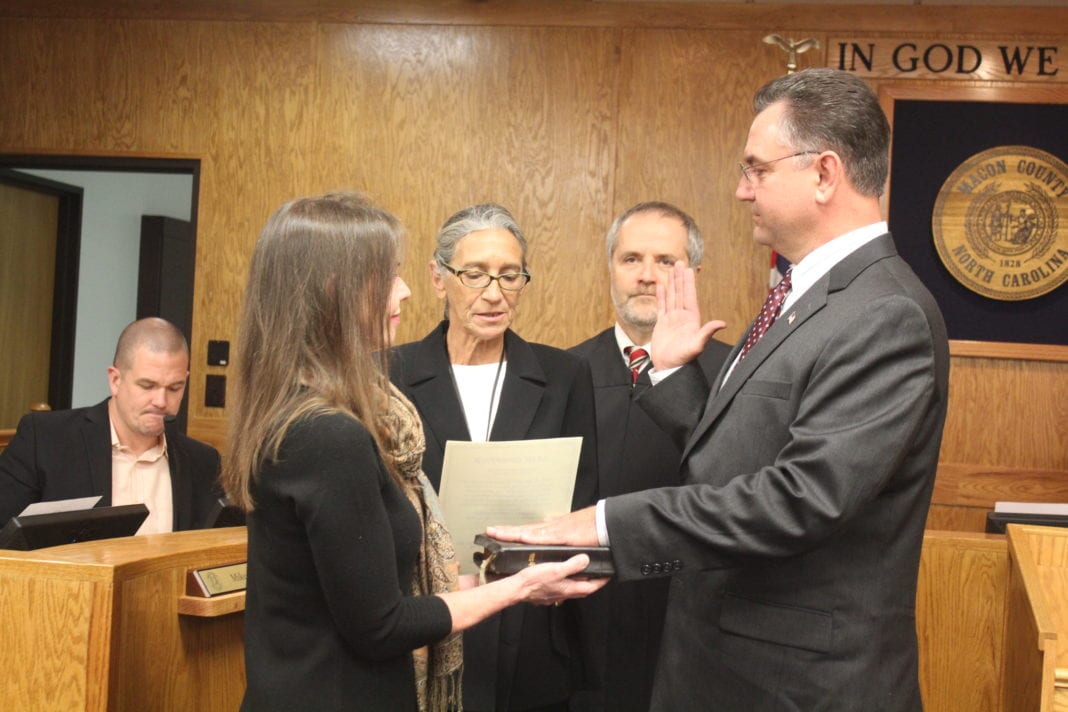 Macon County welcomed a new face to the Board of Commissioners on Monday night as Commissioner Karl Gillespie was sworn into office by Superior Court Judge William H. Coward. Gillespie is beginning his first term as commissioner and will replace Kevin Corbin, who will take his seat in the North Carolina House of Representatives in January.

In addition to Gillespie, Commissioner Paul Higdon was also sworn into office for his second term. After the new members took their Oath of Office, their first order of business was to elect a new chair and vice-chair of the board.

Commissioner Paul Higdon voted against appointing Beale as vice-chair, but did not offer any reason or alternative during the discussion portion of the process.

Historically, the majority political party on the Macon County Board of Commissioners has retained the chair position. The minority party has served as vice-chair in the spirit of bipartisanship. While Commissioner Ronnie Beale was serving as the president of the North Carolina Association of County Commissioners, Beale noted that he would like to see Tate serve as vice-chair, although it would give the majority party control of both seats because his time was needed at the state level.

Tate said that to ensure both parties are once again represented was his reason for seconding Shields’ motion to appoint Beale to the position.

In addition to swearing-in the new members of the board, the Macon County Board of Commissioners recognized outgoing commissioner Corbin for his service to the county. Corbin was presented with his gavel, his name plate, an official Macon County pen, and a framed print by local artist Michael Rogers.

Board of Education swears in members

Three members of the Board of Education were on the ballot in November and each ran uncontested races. Stephanie McCall, Highlands representative, Melissa Evans, Nantahala representative, and Jim Breedlove, Franklin-area representative, all took their Oath of Office during a special called meeting Monday morning. Macon County Superior Clerk of Court Vic Perry administered the oaths.

After the swearing in, the board unanimously voted to re-appoint Breedlove as Chair of the board, and Tommy Cabe as vice chair.