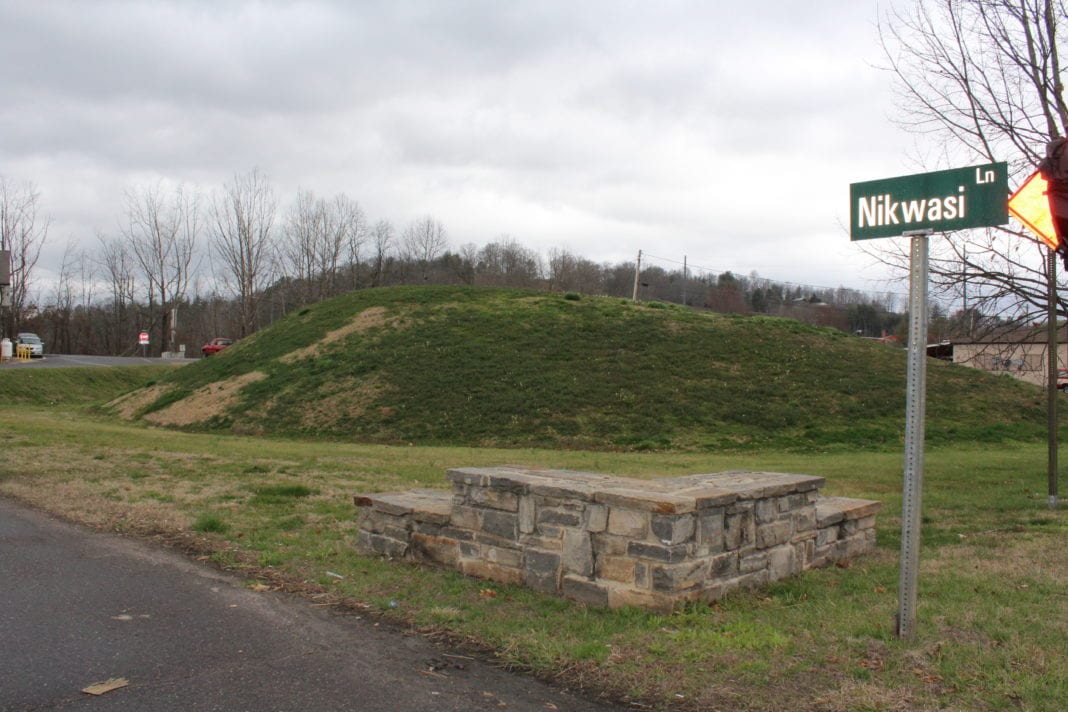 During the annual board retreat Town Alderman and local historian Barbara McRae made a presentation to her fellow board members on the Nikwasi Initiative (NI), a collaborative venture to improve the Nikwasi Mound area in Franklin. The initiative has the potential to bring a much-needed revitalization to the gateway to Franklin.

“I think Nikwasi Initiative, in concert with other ongoing projects in East Franklin, has the potential to transform the River Gateway District by enhancing the natural and cultural heritage attractions of that part of town,” said McRae. “At present, the primary goal of Nikwasi Initiative is to acquire the old Dan’s Auto building and transform it into a visitor’s center for the Mound and the planned Nikwasi/Cherokee Heritage Corridor. NI is actively seeking grant funds for a feasibility study to determine the best use of this space. Initial thoughts are that the building could house displays and small retail businesses, such as craft stores, creating an attraction for tourists and residents and spurring harmonious commercial development.”

The purpose of the corridor is to enhance and bring awareness to the Cherokee and pioneer sites with a focus on the local history of the Nikwasi area in East Franklin. The focus of the initiative will be to incorporate the properties around the Nikwasi Mound and redevelop the properties to enhance the mound. The initiative will also work to expand the tourism potential of the mound and surrounding properties such as the greenway and riverbank.

The project is a pilot initiative and is just getting off the ground. Volunteers want to design workable approaches to the development of other sites on the Nikwasi-Cherokee Cultural & Historic Corridor that extends from Cherokee along Highway 28 to Franklin and continues along Highway 441 to the Georgia border. According to McRae,the most significant point along the corridor is the Nikwasi Mound serving as the origin of the corridor in Franklin.

“The Nikwasi/Cherokee Heritage Corridor is envisioned as a route linking Nikwasi Mound to Cherokee, with stops along the way for important Cherokee and pioneer sites, including Cowee Mound and the Macon County Heritage Center at Cowee School,” said McRae. “The corridor follows the Trail of Tears, a National Historic Trail. This route has national significance and Franklin is right at the start of it.”

Mainspring Conservation Trust, formerly Land Trust of the Little Tennessee, has adopted the project and created Mountain Partners, a partnership with individuals representing the town, Macon County, the Eastern Band of the Cherokee Indians and Mainspring as well as private investors. The group has met the requirements to be considered a 501(c)(3) tax-exempt corporation which will be governed by a board of directors represented by individuals from each partner under the leadership of a consultant/administrator. McRae noted that the town’s involvement with Mountain Partners was paramount.

“The Town of Franklin has a large stake in this initiative,” said McRae. “The town owns Nikwasi Mound, a National Register property of immense importance, and has a vital interest in efforts to better interpret it to visitors, improve accessibility and continue its conservation. Also, this project is a key component of urban renewal efforts that are under way in the River Gateway District. Thanks to these efforts, which include the new bridge, conservation work by Mainspring Conservation Trust, the Greenway and new commercial developments, the district is changing into a unique and welcoming attraction, with public spaces that can be enjoyed by visitors and residents, as well as a stunning ‘gateway’ to the town.”

Speaking to the project’s potential, McRae informed the board that the Nikwasi Mound has recently been nationally recognized as being part of the Trail of Tears. The North Carolina route has now been accepted as part of the National Park Service trail.

Mainspring’s involvement in the project coincides with their location in that area of town, and their mission of preserving natural assets in western North Carolina. After purchasing the Duncan tract in town, Mainspring has cleaned up the brownfield site and is now landscaping the tract. As a part of the bridge project, the North Carolina Department of Transportation has purchased the former Kahn property and once the bridge is completed will allow a worthy entity to hold the property for public purpose. In addition, Mainspring has purchased the Simpson tract and are now doing another brownfield cleanup in the area. The Simpson tract also includes a small tract by North Main Street that will be developed to include a walkway, sidewalks and parking for the public around the mound.

McRae sees the town of Franklin’s involvement being a financial commitment to help further improve that area of town, potentially through improving the Dan’s Auto building, which Mainspring currently has under contract. The vision of the Nikwasi Initiative is to serve as a community development organization and purchasing the  Dan’s Auto property for development purposes. Future plans for the building include the redevelopment of the property to house a visitor’s center and museum for the mound, visitor’s center for the greenway, Franklin, and the cultural corridor as well as other commercial uses such as retail shops. McRae said with improvements to the Little Tennessee River and with the development of Currahee Brewing along the river, that section of town is booming and the NI would only further what Currahee Brewing has already started to bring life to that portion of town.

“If money were no issue, we would have a world-class park with some fine public art, a museum-quality visitor center and charming shops and restaurants in the Gateway District,” said McRae. “We have so much potential. One thing I’d like to see is a ‘West Franklin Village’ concept that creates an identity around that part of town that harmonizes with nearby neighborhoods and other commercial districts. This section has rebounded in the last couple of years, kicked off by Lazy Hiker’s renovation of the old Town Hall, and continued with improvements to the old A&P (Ace Hardware) shopping center, large investments in Nantahala Meats and the creek restoration project at the town’s Memorial Park. This is a nice, basically flat section that is ready to bloom.”