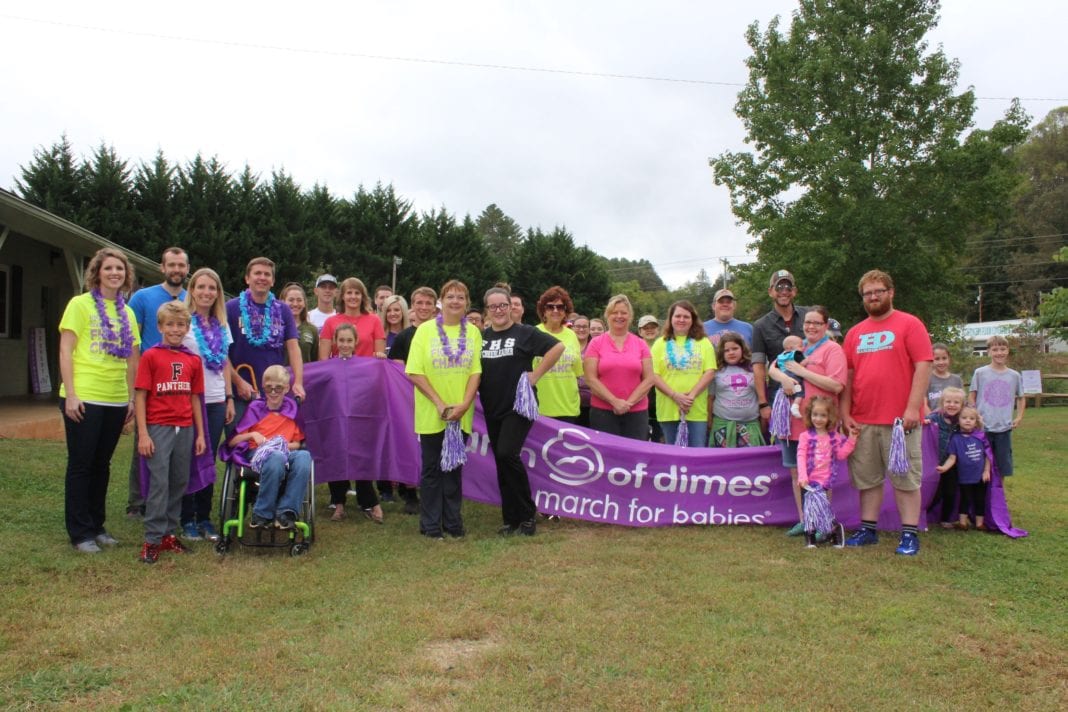 North Carolina currently has a premature birth rate of 10.2 percent— affecting more than 12,000 babies each year. Premature babies often struggle to survive and many have lifelong health and developmental consequences. In half of all cases there is no known cause for premature birth. For more than 75 years, moms and babies have benefited from March of Dimes research, education, vaccines, and breakthroughs. This year, Macon County’s Chapter of March of Dimes set out to raise $40,000 and to date, has raised just shy of $19,500.

On Saturday, Macon County hosted the annual March for Babies fundraiser around town that featured this year’s ambassador family, the Faetzes, who know firsthand how organizations like March of Dimes can be a life-saving tools for babies.

Patrick and Dominic Faetz were born at 33 weeks – seven weeks premature.  They were born on July 14, 2005. Since they were born premature, they had to be kept in isolettes in the neonatal intensive care unit or NICU.  Patrick weighed 4 lbs., 2 oz. and Dominic weighed 3 lbs., 13 oz.

“They could not maintain their body heat, they needed some extra oxygen for the first 24 hours, and they were not able to nurse right away,” said Melissa Faetz, Patrick and Dominic’s mother. “They needed to have an umbilical catheter and to be bottle-fed.  A complication from the umbilical catheter caused problems for Patrick later on. At two weeks old, Patrick developed a blood clot that caused his blood pressure to increase dramatically and it is believed that he also had a stroke from that clot.  When he was released at four weeks old, he was sent home with blood thinning medication and follow up appointments with a pediatric cardiologist. No further issues ever arose from this.  Although we did not know it at the time, Patrick was also born with cerebral palsy, but the cause of that is still unknown. Dominic did not have any major issues while in the NICU, but had to receive therapy for a while afterwards due to his low muscle tone and his size.”

“The experience of being a NICU parent is challenging to explain,” said Faetz. “Time does not seem to pass in the same way that it does regularly.  The nights and days seemed to blend together.  Not being able to share a hospital room with my newborns and knowing that they were two floors away was extremely difficult for me as a new mom.  I remember waking Tyler up at all times during the night and begging him to wheel me down in a wheelchair to go see the boys.  Once I was released, we knew that we had to leave the boys in the hospital and go home.  This was one of the most challenging nights of my life. Fortunately, after one night at home, we were able to move to the Rathbun House in Asheville. It become our home away from home.”

The Rathbun House provides a home-like environment for families or caregivers with a patient that is receiving care or medical treatment at Mission Hospital in Asheville.

While the accommodations at the NICU became a second home for the Faetz, they were faced with daily challenges of the unknowns surrounding their newborn twins.

“The hardest part of being in the NICU is likely the same thing that most parents experience, except it is compounded by unfamiliar settings and an inability to be able to go home,” said Faetz. “The most challenging part for us was the continuous fear of something happening to our children and the debilitating exhaustion of new parenthood.”

This marks the second time the Faetzes have served as the ambassador family for Macon County’s March of Dimes event and they are happy to do so because of all the help the organization offered during such a difficult time in their lives.

“We are so thankful for The March of Dimes for many different reasons,” said Faetz. “At the time, I remember nurses sharing stories with us about materials and equipment that had been supplied by the March of Dimes. We fully support the mission of the March of Dimes to focus on research to help prevent premature births and infant mortality.  We are grateful for their community outreach and advocacy programs.”

As the second time as the ambassador family and telling the story of the twin’s birth, Melissa said the family has has time to reflect on the events and really understand what it meant to have premature babies.

“Since Dominic and Patrick are 12 years old now, being the ambassador family for the second time gave us the opportunity to go back and reflect upon that time,” said Faetz. “We spent a lot of time speaking with the boys about their time in the NICU and retelling the experience to them. It also serves as a great reminder of how much we have to be thankful for.”

Today, Dominic and Patrick are looking forward to their teenage years and keeping their parents on their toes.

“Patrick is now in the 6th grade at MVI,” said Faetz. “His favorite things are country music, especially Reba McEntire, and watching talent and awards shows. His dream is to grow up and be a judge or an emcee on a show like ‘America’s Got Talent.’ Dominic is in the 7th grade at MMS. His favorite thing is sports, especially baseball. He enjoys being outdoors and loves to do anything active, including throwing around a football, practicing baseball, playing fetch with his dog, snow skiing, and so much more.”

This year’s March for Babies fundraiser also featured the 2017 honorary chairperson, Franklin native and radio personality Eddie Foxx. Foxx was right alongside the Faetzes and other Macon families Saturday morning as they walked around town.

“Going back home is always good medicine for the soul,” said Foxx. “Just wish I could’ve stayed a little longer. I can’t even begin to tell ya’ll how much it meant to be Honorary Chair for the Macon County March For Babies. Thank you, March of Dimes … from the bottom of my heart. And a big ol’ thanks to my Franklin folks! Love to see a community come together and support such a wonderful cause. It doesn’t get any better than raising a bunch of money to save babies. I just love ya’ll so much.”