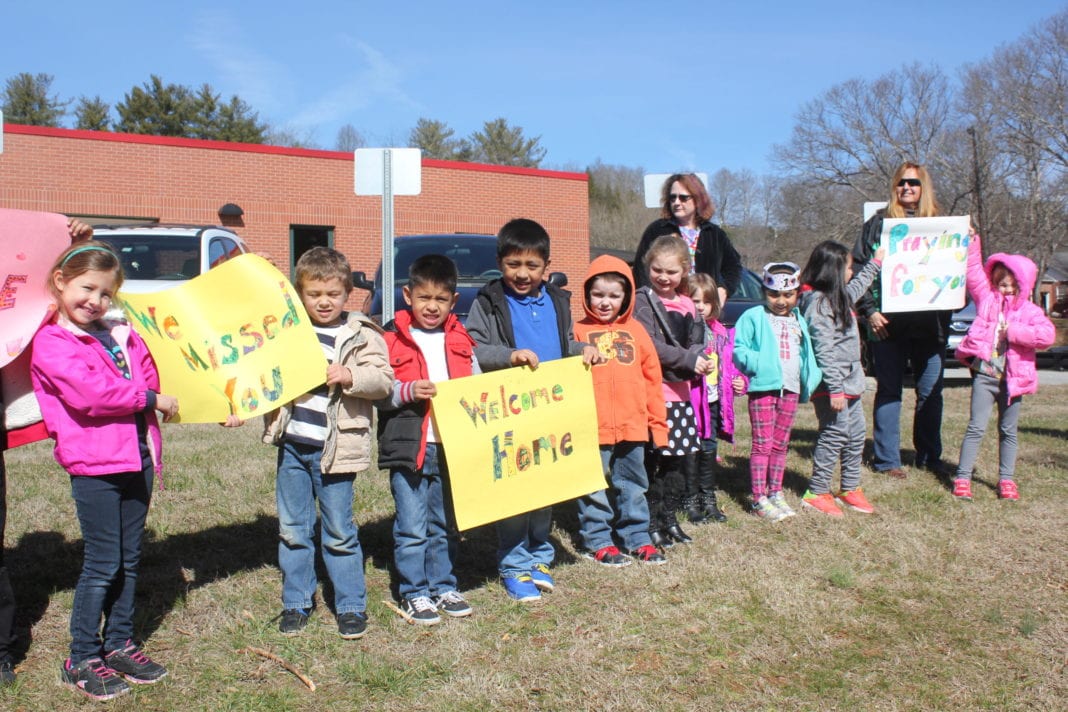 Special doesn’t even begin to describe what happened Friday. On Friday, I watched as an entire community rallied around a seven-year-old boy, a family they may have never met and may never meet. People didn’t stop what they were doing in the middle of their day on Friday because they had to. They stopped because seven-year-old Ashton has changed their lives. A little red-headed boy with the heart of a lion, who does nothing but be himself day in and day out, has impacted an entire community. Ashton hasn’t inspired, encouraged, and lifted Macon County because he is sick. That isn’t even a blip on the radar as to why so many people love him. Ashton has influenced his friends, family, and complete strangers because he loves with all he has, kindness is the only thing he knows, and an infectious positive mentality is something he couldn’t turn off if he tried. And people love him for it.

Ashton is the definition of joy. And he is that way because he follows in the footsteps of his parents. His mother Amanda has the purest soul and will use her last breath to help someone else. His father Anthony had dedicated his life to service, working for the Macon County Sheriff’s Office, and is the definition of resilience and bravery. They didn’t just get it right with Ashton either. Their daughter Addison is a bundle of love and energy and the most tenacious spitfire redhead I have ever met. And sweet, sweet baby A, isn’t even a year-old yet, but he is already winning over the hearts of anyone he meets with those baby blues. I may be biased, because I obviously love and care for Ashton, his parents, and his little brother and sister, but I think just about anyone who has ever met the family would agree. Ashton has a soul promised to helping others, and a heart that wants to give and make a difference, and he got that from his parents, who are doing an exceptional job raising the kindest most loving children I have ever met.

But Friday wasn’t just special because of how incredible the Zari family is. Friday was special because in addition to having loving, remarkable examples of parents to follow, Ashton is growing up in a community that fosters that same love and respect. Friday was special because a motorcade of law enforcement met Ashton when he reached the county line on his way home from the children’s hospital in Columbus Ohio. Those Sheriff’s deputies, town officers, and state highway patrol officers are part of the reason Friday was so special. Our community law enforcement know that even more important than answering a distress call when people are at their lowest, showing up to lift up families and community members when they are at their highest is just as important.

Friday was remarkable because an entire elementary school lined the banks of their school to wave to a classmate they haven’t seen in months. They jumped up and down waving signs of well wishes and kind words. Teachers helped their students craft signs with superheroes and hearts. Friday was special because little boys yelled, “Ashton you are my hero. You are so brave,” and, “We are your biggest fans.” Little girls held a sign that said, “We are praying for you.” Friday was so special because those children held those values because they are raised in this incredible community, by parents that teach them people like Ashton are heroes, even if he doesn’t wear a cape. A sign promising prayers is acceptable and the little girls holding it knew what that promise meant because their moms and dads taught them the importance. That’s where we live. How wonderful is that?

We live in a place that in the middle of the day, business owners stopped what they were doing and encouraged their employees to line the street to welcome home a little boy they probably had never met. People stopped what they were doing because waving to Ashton was a better way to spend their time. That’s the kind of place we live in. With people like that surrounding you, that goodness can’t help but be contagious.

Macon County is the greatest place on earth. Because it doesn’t matter if you know someone or not, if they need a hug, a prayer, or welcome home parade, we make it happen. We would do it for anyone, because it’s just what we do. It’s who we are. And isn’t that the sweetest, most special thing to be proud of? It’s beautiful, and it was a remarkable thing to experience.

The Macon County Sheriffs Department Ladies Auxiliary was the organization that made it happen.

They asked some local businesses to assist in making some memorable moments while they are home.  Ruby Cinemas, Motor Company Grill, and Sweet Stems Florist are providing a “date night” for Amanda and Anthony; Sweet Stems Florist and April’s Flowers on Main provided flowers for both Amanda and Addison for Friday’s homecoming; BiLo donated balloons; Everything Zen and Parris Hair Design and Salon have donated items for Amanda to have a relaxing day to herself; Wildflower Designs Florist and Boutique have donated Valentines Day flowers; Ingles donated some groceries; and Move More Fitness provided a donation for any needs the family may have while home. Erin Henson Photography donated full photography services for the event on Friday.

EBCI purchases half acre of land in Franklin for $400,000

Filing for 2018 election to begin next month