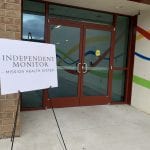 As part of the purchase agreement between Mission Health and HCA Healthcare last February, the North Carolina Attorney General’s Office ensured that the guarantees HCA Healthcare made to maintain certain existing services like charity care and rural hospitals would be honored by promising an independent monitor be appointed to assess HCA’s compliance.
Nashville-based Gibbins Advisors was hired to oversee the Asset Purchase Agreement between HCA and Mission Health System and as part of that process, set out on an informal tour to Western North Carolina counties last week to meet with residents.
Through these meetings, Gibbins Advisors has explained to the public its monitoring role and allowed space for those in attendance to ask questions and share feedback about HCA’s overall performance in the region. To date, meetings held in Jackson and Macon counties were met with angry residents, but according to Gibbins, the complaints were not under their purview and needed to be taken up with HCA management directly.
“From what I understand, HCA is open and receptive to hearing your complaints and we will relay that to them, however we are only here to assess if the guidelines of the purchase agreement are being met,” said Gibbins’ Ron Winters.
Winters repeatedly said that complaints about things outside of his purview should be voiced to the local CEO, per HCA’s request. Karen Gorby, Angel Medical Center’s CEO, was present at last Thursday’s meeting held mid-day at the Robert C. Carpenter Community building. One resident shared an email exchange she had with Gorby and said, “I think Karen Gorby is in way over her head to be operating a hospital facility.” Despite numerous complaints about the hospital’s practices, Gorby did not respond.
The first meeting held in Cashiers in Jackson County heard complaints about losing doctors, billing issues, lack of communication with HCA, all of which were echoed during meetings in Highlands on Wednesday night and again Thursday morning in Franklin. Winters said they would record and pass on the complaints to HCA, but that those complaints weren’t the focal point of the meeting.
“What we can do something about is assuring compliance,” said Winters.
According to Winters, compliance meant keeping existing services such as surgery at local hospitals Angel Medical Center and Highlands/Cashiers Hospital, something residents argued wasn’t happening.
One resident spoke in Franklin about a friend who had to wait 24 hours to be transported to Mission Health for an appendectomy because that surgical procedure wasn’t offered in Franklin. A similar case was heard during the Highlands meeting. According to Winters however, both hospitals still technically offer surgical procedures, such as a colonoscopy in Highlands, therefore they are in compliance with the agreement. For Franklin, some surgeries may be possible on a limited basis for whenever a surgeon is actually at the hospital. However limited it may be, it is still possible.
Meetings hosted by the Gibbins firm will continue throughout February and then a final report will be given to the Attorney General’s Office. In the meantime, The Macon County News will be launching an in-depth series “Since the Merger” addressing concerns voiced during the meeting such as discontinuation of community partnerships, billing struggles, access to doctors, and what is next for Macon County.