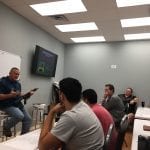 Twelve students sat in a classroom at Jeff’s Ammo & Arms on Carolina Mountain Drive just before 8 a.m. Saturday. Each had a different reason for taking their concealed carry permit class, but the same thing was on their minds: the recent shootings in Dayton, Ohio and at a Walmart in El Paso, Texas. 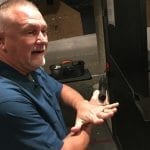 “The Walmart in Franklin, no matter when you go, it’s full,” said 15-year veteran course instructor Tony Carver of the Macon County Sheriff’s Office. “There is not going to be a magic fairy there to save me or to save my two little kids.”

Carver went on to say that having a gun is not enough. Training, proficiency and knowing the law could mean the difference between “being absolutely right and absolutely dead at the same time.”

He sternly warned the students ranging from age 21, the youngest age at which a concealed carry permit may be awarded, to an attendee in her 70s.

“Be careful, have a plan if you’re going to carry that gun out in the world,” he said. “The ignorance of using guns in self-defense is very high.”

The state-mandated eight-hour course assures that would-be concealed carry permit holders know the legal boundaries for use of deadly force and where a permit allows them to carry a concealed weapon and where it does not, once they pass a background check and register with their local sheriff. 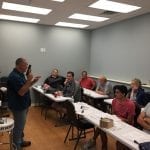 Students were required to pass a 20-question multiple-choice and true/false test, then hit a target on the gun range at 3, 5 and 7-yards’ distance 21 out of 30 times.

“I should’ve done this a long time ago with the places I’ve stayed and worked,” said Tommy Stockton, 63, of Franklin, who was planning a long road trip with his wife and wanted to be legal to carry an arm.

Carver was adamant that students respect the “big responsibility” of carrying a weapon.

In addition to colorful, first-hand law enforcement accounts, Carver entertained hypothetical scenarios and much discussion ensued about the recent shootings in Dayton and Texas. 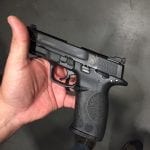 “Don’t think because you got a gun on you, you can somehow intervene,” he said in an effort to prompt students to consider what it would actually be like in an active shooter situation.

Carver gave advice about practicing shooting with one hand while holding a flashlight in the other and shooting in low-light conditions. He also harped on the legal boundaries and the expectations that will later come to explain your     actions in court.

“You have to be able to explain what you thought, heard, smelled, felt,” he said. Your heart rate is going to be up, your fine motor skills are going to be compromised and it may be more difficult for you to manipulate a gun in a trying situation, he explained. “If you can’t point a gun, maybe you’re a good candidate for a Taser or pepper spray.”

Only three students had never shot a semiautomatic pistol before: me and two students who appeared to be in their 20s.

The training objectives were simple: students would learn how to handle a gun safely; know the places where guns are prohibited even with a permit; and learn to identify the major parts of the weapon. Carver also covered loading, unloading, storing or securing and firing a handgun as part of the $75 class, which included rental of a Smith & Wesson .22, 30 rounds of ammunition and use of the gun range, a value of upwards of $40 alone.

Jeff’s Ammo owner Jeff Wang, who wore a gun on one hip and two magazines on the other, said the courses have been full ever since he started to offer them on a monthly basis two years ago. He estimated that between 300 and 400 people have taken the class at his shop.

Areas where it is not permitted to carry a concealed weapon even with the permit include educational property, state property such as a courthouse or state park, private healthcare facilities and on any private property where the owner has posted that it is not permitted. A concealed carry permit is invalidated if the carrier has consumed any alcohol.

There are three justified reasons for use of deadly force: imminent fear of death, great bodily harm or sexual assault. Fear of imminent harm is assumed in North Carolina statutory law if a non-resident breaks into a person’s home, motor vehicle or workplace.

“It is enough to get that person stopped, notice I didn’t say killed,” Carver said when describing the boundaries of the law.

Nancy Morrow, a Jackson County resident in her 70s, recently purchased a Smith & Wesson .38 and has been practicing with the help of a coach.

“I’m afraid to walk for my exercise on my street due to a persistent, adolescent black bear,” she said. Morrow worked on her grip with Carver, and despite nervousness at using a Smith & Wesson M&P .22 for the first time on the test, she passed with flying colors.

“Bad people’s armed,” said Phil Higdon, 55, during one class discussion. “They’ve got theirs.” 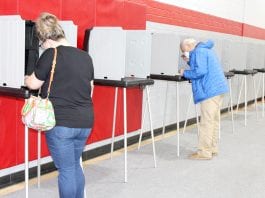