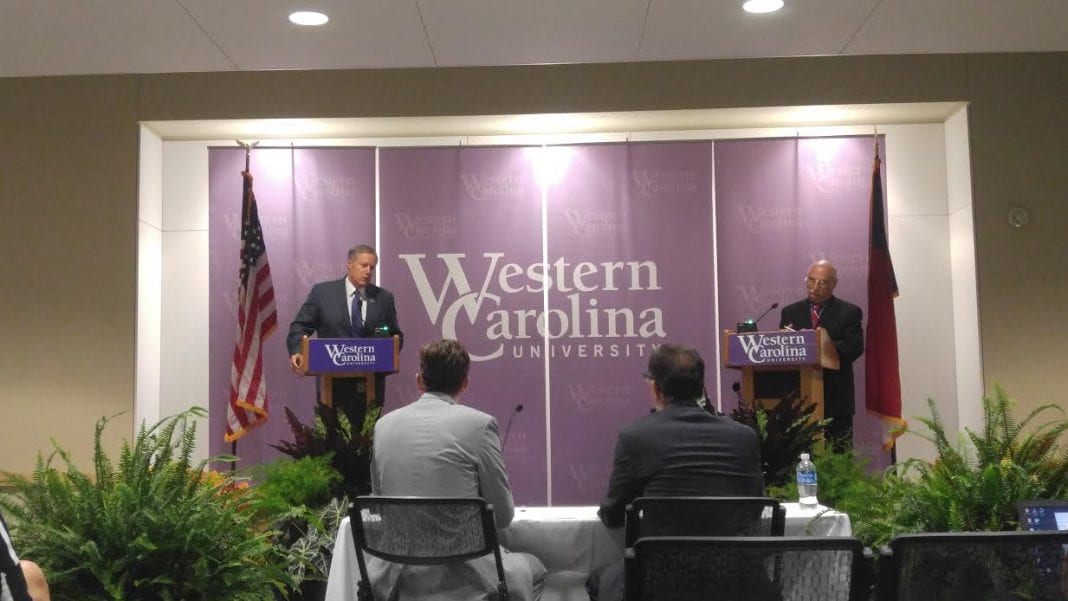 Candidates for the 11th District of Congress took the stage Friday night in a debate hosted by Western Carolina University and moderated by WLOS. The debate covered everything from the candidates’ stance on gun control, how to defeat ISIS and how to create jobs in Western North Carolina. Incumbent Mark Meadows, a Republican from Jackson County faced off against Rick Bryson, a Democrat from Swain County.

Bryson was born in Franklin but grew up in Bryson City. He graduated from North Carolina State University in 1965 and worked in the defense industry for several years with a top secret security clearance, worked as an industrial magazine writer for seven years, operated his own industrial public relations business for 40-plus years, authored more than 1,000 technical articles and four novels – the latest of which is “The Jefferson Legion.” Bryson has four daughters, nine grandchildren, eight great grandchildren, and is married to Dotty.

Mark Meadows was first elected to Congress by the people of Western North Carolina in 2012, after a 27-year career as a small business owner. During his time in Congress, he has championed fiscal responsibility, accountable government, pro-growth economic policies, pro-family and pro-life initiatives, and a strong national defense. In addition to fighting for conservative values, Congressman Meadows is also dedicated to providing top-notch constituent services to North Carolina’s 11th Congressional District and is committed to upholding his Christian values and conservative principles while serving in Congress. Meadows lives in Jackson County with his wife Debbie. They have two adult children, Blake and Haley, and are preparing to be first-time grandparents.

Bryson’s political experience began in 2013 when he was elected as an alderman in Swain County. “I’m an alderman in Bryson City, elected in 2013,” said Bryson. “The experience has convinced me that government can work if people of both parties work together. Public service is about getting things done, not being an obstructionist.  Since I’ve been an alderman, we have upgraded our water system, stopped the sales tax takeaway by the General Assembly, reduced our insurance premiums with a fire truck that is sized to operate on small streets, acquired land for a maintenance center, and convinced the NC Wildlife Resources Commission to name Bryson City as one of its “Trout Cities.”  Our town is on solid footing, with a fund balance that is approximately 12 times the state requirement.”

Meadows’ political career also began in 2013 when he began his first term in Congress. Meadows has served as a member of Congress since January 2013, and has previously served as a congressional delegate to the 68th session of the United Nations General Assembly and as a commissioner on the Congressional-Executive Commission on China.

During his tenure in Congress, Rep. Meadows has served on the House Oversight and Government Reform Committee where he chairs the Subcommittee on Government Operations, which has oversight jurisdiction over federal agencies, the Executive Office of the President, the Postal Service, the Freedom of Information Act, and more. He also serves on the House Foreign Affairs Committee (as the vice-chair of the Africa Subcommittee) and the House Transportation and Infrastructure Committee.

According to Bryson, he is running for Congress based on concerns he has surrounding Meadows’ tenure in office.

“My opponent shut down the government in 2013, costing this district $23,000,000,” said Bryson of his reason for running for office. “He voted against improving roads, help for municipalities, and the Violence Against Women Act.  He favors giving Social Security to Wall Street, eliminating public schools, and reducing the food stamp program when one in four children in WNC are in danger concerning food.  He has an ethics scandal in his office, caused by hiring a man as his chief of staff who sexually harassed female office workers (three testified to this before the Office of Congressional Ethics), then paid off the man with an improper “severance package” that is in violation of the House of Representatives Manual; what has not been reported is that at least five other people who had worked for him were similarly paid off. I, on the other hand, have a positive plan for our mountains and the people I’m elected to serve. I support women’s issues, favor giving veterans a greater voice in their quest for healthcare, will strengthen Social Security, and create a form of the Research Triangle Park in Western North Carolina.  I support the Second Amendment, but favor working with gun owners to secure firearms so that we can stop reading about mass murder on a daily basis. Together, we can make America safer and still keep sportsmen happy.”

Meadows is running for re-election to his second term in office because he believes that Washington is broken and needs leaders who are willing to challenge the status quo and return power back where it belongs–to the American people.

“In my two terms in Congress, I have worked to demonstrate a firm commitment to fighting for Western North Carolinians and advocating conservative principles, such as smaller government, lower taxes, and reducing regulations on local businesses and families,” said Meadows. “I believe that having open communication with everyday people in the district is where the best ideas come from, and am committed to keeping an open dialogue between my office and the people I serve.”

According to Bryson, his top priority if elected is infrastructure in the region.

“We need to upgrade our infrastructure,” said Bryson. “The growth of our Gross Domestic Product is less than half that of the rest of the state.  Infrastructure is the difference; down state is better served.   Broadband is at the top of the list, and roads are not far behind.  Think of the towns in our district that are difficult to reach.  How can we compete with Hickory, Statesville, Greensboro, etc. with small, winding roads?”

The 11th district is comprised of counties such as Graham, which have some of the highest unemployment rates in the state. Meadows noted that his top priority would be fostering job growth and while it isn’t the role of federal government to create jobs, it is Congress’ jobs to ensure that small businesses have the resources needed to flourish.

“My top priority for Western North Carolina is jobs and helping create a culture for job growth in our district,” said Rep. Meadows. “I believe the primary way to do this is by reducing job-killing regulations that place unnecessary burdens on business owners. One specific thing I have found while in Congress is that many of those burdensome regulations result from the problem of transferring law-making authority over to un-elected bureaucrats in federal agencies. Our founders intended for Congress to be the branch of government that writes laws, therefore being directly responsible for them and accountable to the people for what laws they pass. Unfortunately, over time, Congress has begun to delegate their law-making authority over to agencies like the EPA, which removes accountability from the process since bureaucrats at these agencies are not elected. I believes we need to return power back to the people by placing the accountability on Congress to write laws and curb regulations that place harmful burdens on taxpayers and job creators.”