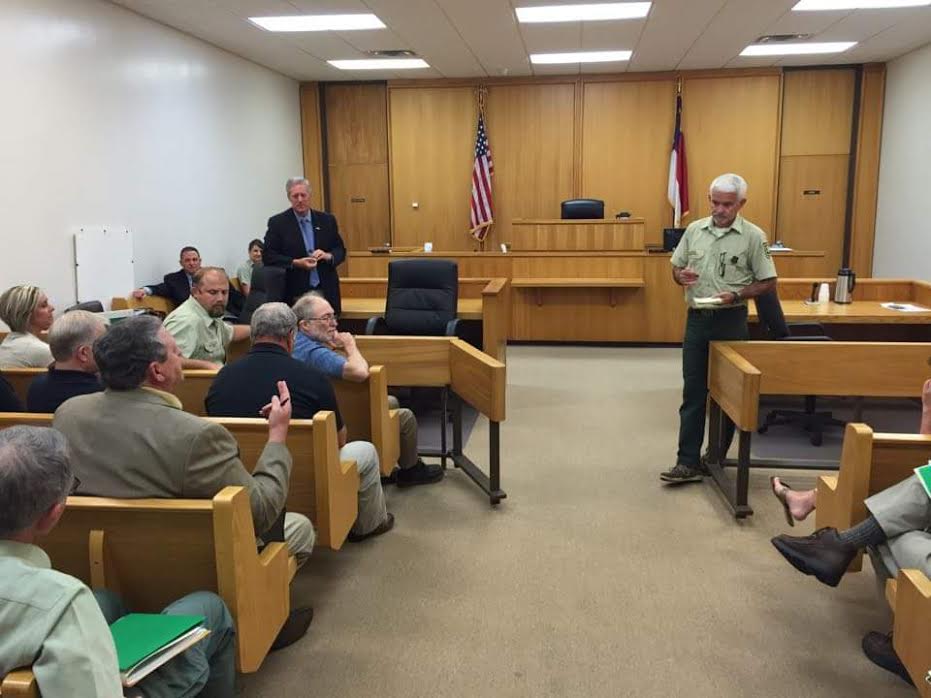 From the time the United States Forest Service first released a list of 54 areas for possible consideration for Congressional wilderness designations in 2015, public input on how the forest management plan process should go has been loud and diverse.

Western North Carolina counties have voiced their opinions in the form of resolutions, and activist groups and members of the public have spoken during public comment periods and have written letters to state and national leaders.

Since 2015, while the forest service has been in an evaluation process demonstrating how each of the 54 areas identified either does or doesn’t meet criteria to be designated as wilderness, the public has been doing its own research and voicing their opinions. With so many different groups, organizations and agencies having a seat at the table in the process, Congressman Mark Meadows held a listening session in Macon County last week to solicit specific input from invited stakeholders, governing bodies, and emergency management agencies operating within the 11th Congressional District.

“I have always believed that our officials at the local level are always closest to the issues going on and they best understand the risks involved with plans like these,” said Congressman Meadows. “That’s why we wanted to hear directly from you all, the county managers, commissioners, and emergency directors, so you all can help me in making the most informed decision I can.”

Allen Nicholas, supervisor for the National Forest, who has served in his post for the last six months said that anything the National Forest recommends during the evaluation process is just that, a recommendation, and ultimately, a final decision is up to Congress.

The U.S. Forest Service can take action on recommending that new acreage within Western North Carolina’s two national forests as soon as 2017. Meadows would be a major player in that recommendation, assuming he retains his seat in November after the election in which he is running against Bryson City Democrat Rick Bryson.  Generally, such recommendations either originate from or come with the support of Congressmen who serve the district impacted by the evaluation. In terms of the Nantahala and Pisgah National Forest management plan,  the  majority of potential wilderness additions outlined by the Forest Service are within Meadows’ Congressional district.

Within Meadows’ district, nearly all county government boards, including Macon County, have passed resolutions against any additional wilderness designations within the national forests. Jackson County is the lone county to pass a resolution in favor. Meadows hosted the listening session to invite county leaders from his district to have an open discussion on the plan and give them the opportunity to voice their concerns.

“I feel like it is important that we get a real, open, honest, dialogue,” said Meadows. “An overwhelming majority of county officials have expressed great concerns with some of the proposed additions to the plans. I fully support additional funding for the US Forest service as long as both ranger districts plan to use those resources to manage the forest and provide greater access for recreational use. It would be premature for us to weigh in on any proposed legislation, but I do want to continue to emphasize active forest management and greater access for recreational use.”

One significant focus of last week’s listening session surrounded the safety aspect of additional wilderness areas. Congressman Meadows said that one point he hasn’t heard discussed as much as he would like is how additional areas would be served in terms of emergency management.

Nicholas and Meadows encouraged those attending the listening sessions to continue the dialogue on the forest service management plan through the open houses scheduled throughout the fall.

“We appreciate all the local officials who attended and gave their thoughts, and we look forward to hearing more input – -including the additional six public forums to be held by the Forest Service –where members of the community can make their voices heard,” sad Meadows.

The Forest Service has scheduled open houses at all six Nantahala and Pisgah district offices from mid Sept-mid October.

These drop-by events will allow members of the public to visit their local district for informal discussions on the developing forest plan as well as other activities happening at the district.