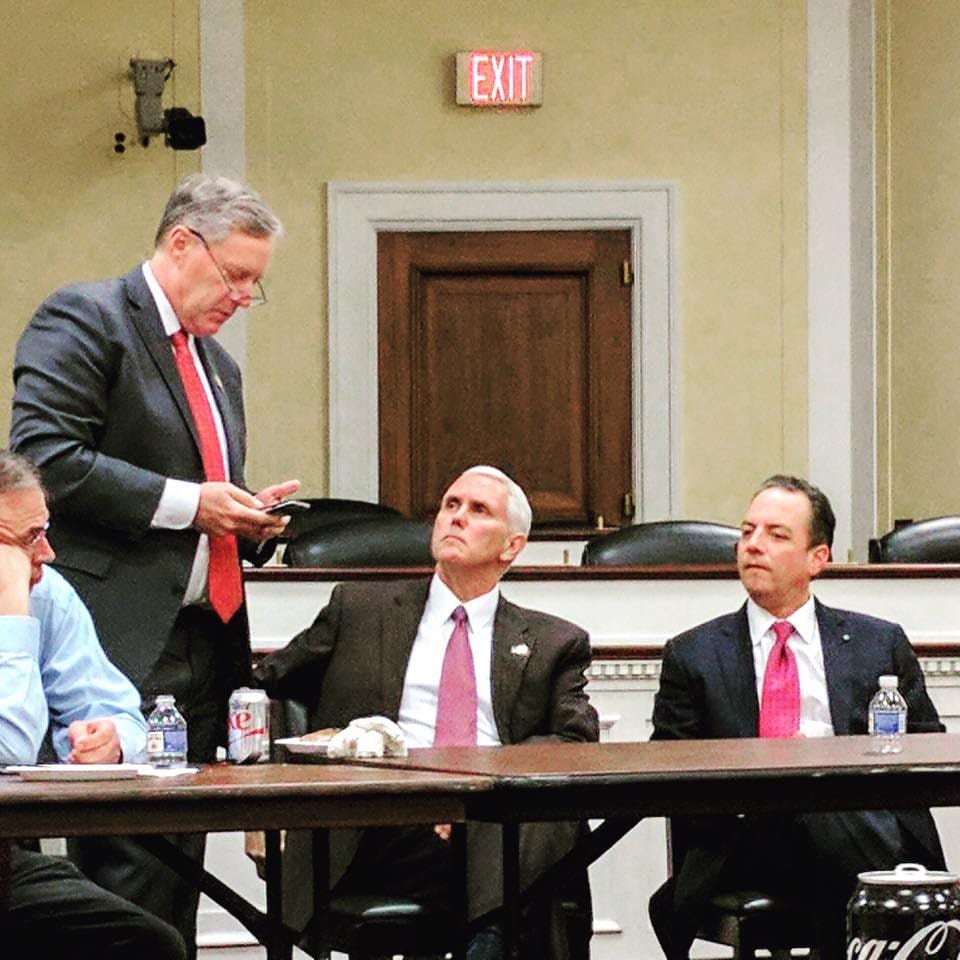 With Congress taking a break and Representative Mark Meadows planning to spend time in the district this week, Rep. Meadows held a conference call last Thursday with reporters to talk about progress with the repeal and replacement of the Affordable Care Act, and the upcoming budget process.

“We continue to make steps in a positive direction,” said Meadows. Meadows has found himself in the national spotlight, being heavily involved in reforming the country’s health insurance as chair of the House Freedom Caucus, a group of that chamber’s 30 to 40 most conservative members that blocked a previous plan backed by President Donald Trump and House leadership to replace the ACA.

Meadows said he has had a number of discussions with the Trump administration, including Vice President Mike Pence, as well as Republican leadership in the House of Representatives regarding health insurance. House Speaker Paul Ryan (R-Wisc.) announced last week that an amendment has been authored creating a federal high-risk pool that Ryan said would drive down health insurance costs. The amendment is a step in the right direction, but isn’t a comprehensive fix, said Meadows.

According to Meadows, the high-risk pool will ensure that pre-existing conditions are covered in a way that doesn’t drive up premiums. One addition leaders are currently debating is an “invisible underwriting tool” that would allow people with pre-existing conditions whose insurance costs have gotten too high to be underwritten at the state level, using federal funds to bring their premiums down.

The underwriting tool is something floated by Pence, and while it is still in the negotiation phase Meadows hopes to get legislative text soon.

Meadows said the addition would give a 100-percent guaranteed access to health care, and gives a safety net where those too-high premiums can be subsidized through a risk-sharing mechanism at the state level.

A huge point of contention in the health care debate has been coverage for individuals with preexisting conditions, which Meadows said is one of the last remaining hurdles in the debate process. The replacement plan is looking for a rule change to give states a waiver to opt out of some of Obamacare’s mandates, but would specifically not allow states to waive out of guaranteed issues such as covering pre-existing conditions or allowing children to stay on health plans until age 26. Those provisions would continued to be included.

Meadows said allowing individuals to pick and choose what kind of coverage they get gives more flexibility to consumers, allowing them to pick a plan that actually meets the risks they want to cover.

Meadows also updated local reporters on the budget process, which was initiated with President Trump proposing his budget earlier this year. The final budget will have to go through Congress and will likely see substantial changes before being approved, but according to Meadows, is expected to be on track and without a government shutdown.

Meadows noted that he is confident the final budget will be on track with President Trump’s budget proposal to increase military spending and will also include funding to build a border wall along the border of Mexico.

“I don’t anticipate any real objections to reaching consensus on funding for the government,” he said. “Even though there may be some talk of shutdown, I think that is more making for headlines than it is in reality, based on what I’m hearing on Capitol Hill.”

Locally, concerns have been mentioned regarding funding programs such as the Appalachian Regional Commission, which provides significant investments in rural infrastructure across the country, specifically in Meadows’ district in Western North Carolina. Meadows said that he is confident that programs such as the ARC will be saved in the budget and will continue to be funded at current levels.

Meadows will be in Western North Carolina while Congress is on break, but said is prepared to return to Washington if needed for a final health care vote.