Home News Corbin sworn in as representative of District 120 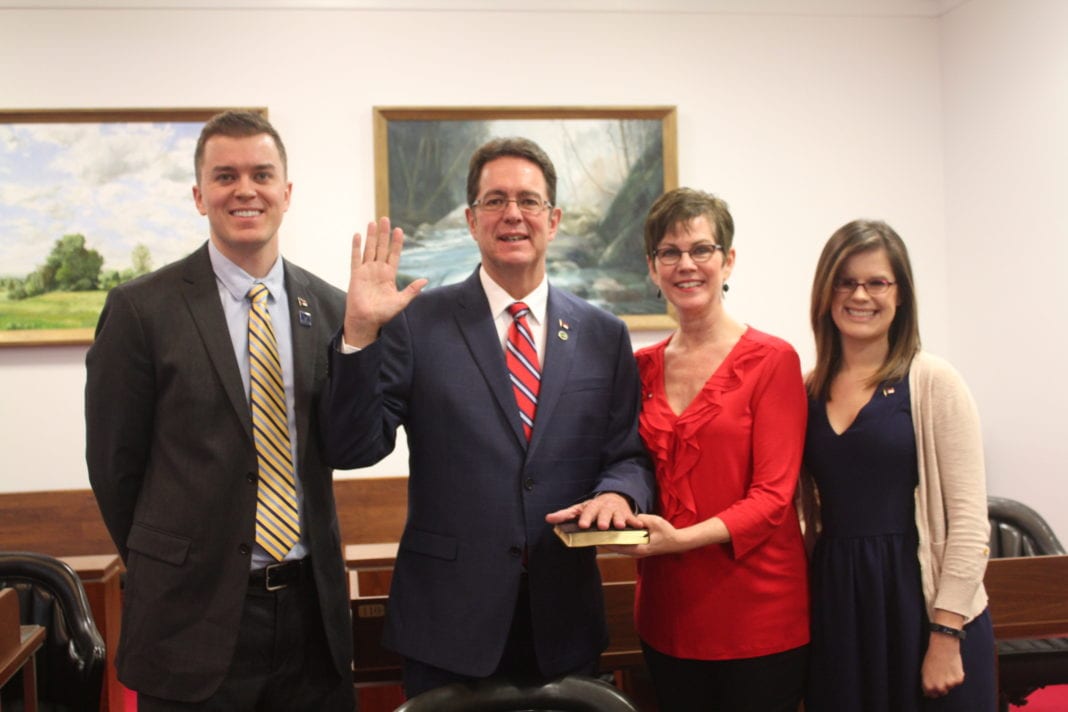 After a life of public service in Macon County, Macon County native
Kevin Corbin officially became the county’s representative in the
North Carolina General Assembly as he was sworn in on Wednesday
afternoon in Raleigh.

“I envisioned the 85,000 people that I represent and am focusing on
the fact that I represent all of them,” Representative Corbin said of what it meant
to be sworn in to represent the North Carolina House of Representative
District 120 on Wednesday. “Some are Republican, some are Democrat,
some are unaffiliated and some do not vote at all.  I see that as an
honor and a challenge to do so.  Having served in local government
literally half my life, it has made me aware that I always need to be
open to my constituents and be approachable all the time.  I have
always been that way and that will continue in this new role  .”

While Wednesday marked Corbin’s first official day on the job, his
training began shortly after sweeping the election in November.

“Freshmen had two days training at the General Assembly Building in
December and we just completed two more days of training at the UNC
School of Government in Chapel Hill,” said Corbin.  “Frankly, it is
like trying to drink water from a fire hose. I will be honest with you
and say that it is a lot to absorb and it is a humbling experience to
once again be a freshman. My approach will be to listen and pay
attention a lot and ask a lot of questions of experienced legislators.
You can’t possibly learn it all from a book and frankly, most
successes as a legislator will come from building relationships, which
I have already begun to do.”

With the initial training out of the way, Corbin is ready to get to
work earning his $13,951 salary, which with benefits and insurance
figured in is actually less than what he earned as the chair of the
Macon County Board of Commissioners.

“Knowing every day that I am representing some of the best 85,000
people in the State of N.C. is what I am looking forward to the most,”
said Corbin. “Every legislator represents approximately the same
number of people per district. A good friend that I have made in the
training process is Andy Dulin from Charlotte. I asked him how long it
takes him to drive from one side of his district to the other. He
responded, ‘eight minutes.’ It takes me two and a half hours to drive
across mine. Just because we are rural does not minimize needs here
and I will work every day to make sure Western North Carolina has a
voice in Raleigh.  I have come to realize that I am the only voice
those 85,000 people have.  When I pointed that out to him, he chucked
then said, ‘I do understand.’ I will work to see that others do too.”

Laying out priorities and first challenges

“Service to my constituents will be number one,” said Corbin. “I know
a lot of folks will be calling my office in Raleigh on state issues
and I have already instructed my legislative assistant to prioritize
constituent service above all else.
“My second priority will be to introduce legislation to bring
increased funding to small K-12 schools that have small populations,
like Highlands and Nantahala in Macon County. Honestly, as a freshman,
it is difficult to get legislation through committee and passed on the
floor. It is almost impossible some say. I have already begun to
‘grease the skids’ and have had conversations with the Speaker of the
House and other leaders in the House and Senate, so we will see.
“My third priority will be to co-sponsor legislation to return local
control to school boards about when to start the school year. This
legislation has been introduced and failed in the past, but again, I
am working with other legislators already to hopefully give it a good
shot.
“My fourth priority is going to be to learn the ropes. As a freshman,
I am more than aware that I do not know everything or how the process
works.  I admit that upfront but I will work overtime to learn. I hope
to be a quick learner and an excellent student.
“And lastly, I plan to prioritize being true to my roots in WNC and
work tirelessly for my district. I have a topographical map framed
that will go in my office there to remind me.”

Unlike other legislators in the state, Corbin will likely not need to worry about the special 2017 election that is scheduled as a result of a court’s ruling on the state’s districts. State legislators have until March to present new district maps after the current district’s
were ruled to be unconstitutional shortly after the November election. The decision on the maps are currently on hold while the Supreme Court decides whether or not to hear the case. Members of both the House and Senate in the eastern part of the state are preparing for another November election, but Corbin and other Western representatives will likely be spared the special election.

“No districts in far WNC are affected,” said Corbin. “It only affects districts named in the lawsuit and the ones possibly that border them. There is not one close to here.”

Another issue Corbin will likely face soon now that he has been sworn
into office is the possibility of a repeal of House Bill 2. The
infamous “Bathroom Bill” was set to be repealed during a special
session of the legislation by the same members who approved the bill
last year, but a compromise was unable to be reached. North Carolina’s
former attorney general and new governor Roy Cooper, ran his campaign
on the promise of a repeal. The repeal was close to happening in late
December when Cooper facilitated a deal with the Charlotte City
Council, which approved the original anti-discrimination ordinance
that led to HB2, to repeal their ordinance under the guise the state
would do the same with HB2. After a full day in session, in the final
hour or so discussion began, but didn’t get far. Legislators agreed to
repeal HB2, only if a moratorium on local governments passing any new
anti-discrimination ordinance was in place. Legislators who wanted to
see HB2 repealed, voted against the repeal because they believed the
moratorium was wrong.

With Cooper at the helm of the state officially has of midnight on
January 1 when he was sworn in, it is likely a repeal will come up
again and Corbin is ready for that discussion.

“I stated during the campaign that I would like to see the entire
issue go away,” Corbin. “That needs to start with the full withdrawal
of the Charlotte ordinance in its entirety with no ifs, ands, or buts.
In the 11th hour of the agreement to repeal all on both sides, one of
the supporters of the Charlotte ordinance made the comment to the
National media that as soon as the Legislature repealed HB2, that
‘they’ were going to have several named cities pass similar ordinances
to the Charlotte one.  If we are going to do away with it, let’s do so
and let things be the way they were before any mention of the issue.
It is a touchy issue and both sides need to realize that.  I will work
to do so on my part and will encourage others to do the same.”

$30K left in community funding pool; BOC to accept second round of applications