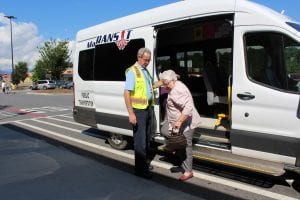 Macon County previously used the Ford Econoline vans but when they were discontinued, a new transit vehicle had to be chosen. The North Carolina Department of Transportation chose the Ford Transit Van to replace the Econoline.

According to Angel, the vehicles that the county is currently using came in on June 30 and the department is already receiving complaints.

“We have had a number of complaints from our elderly or disabled passengers who are trying to board or exit the vehicles. There’s a difficulty in the step in trying to get into the vehicle. They’re not like the school bus type. It’s an exterior step, then a step into the vehicle. It’s about 11 inches in height,” said Angel. 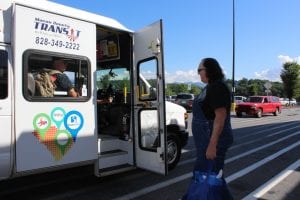 When purchasing the new Ford Transit Vans, the purchase came with the option for different features such as sliding doors or smaller steps. The additional features would cost more, and without ever seeing an example, it was difficult to make a decision. Angel noted that while talking to other transit directors in the state, they either are in a similar situation with problematic vans, or they waited until counties like Macon received the new vehicles to see if their respective counties wanted to follow suit or go in a different direction. After ordering four vans and seeing them in operation, Angel asked the county for additional funds, not to replace the existing vans, but to include the additional features in vans that are scheduled to be purchased.

“We are requesting the transit-type [similar to school bus] doors since the sliding doors have an 11-inch step to board the vehicle and a very wide opening, making it very hard for passengers to board and un-board the vans,” said Darlene Asher, assistant director of Macon County Transit. “We have an extra step to help passengers reach the first step, but it is the second step that is the 11-inch step. The Transit Door was not on state contract, therefore MCT only ordered what was on State Contract, therefore for not asking the County for any more money. But after receiving four new vans with the manual sliding doors and seeing and hearing the complaints from passengers, MCT went before the board and asked for the money to order our next three vans with the transit door system.”

Macon County Commission Chairman Kevin Corbin presented Angel’s request to the board and said that he looked at the van and agreed with Angel’s recommendation to change the vans to be ordered.

“My question to Kim was, ‘Are you requesting that we allocate money and somehow correct these?’ the answer was no, we have brand new vans that we can make work. The driver will come around and assist the passengers if necessary,” explained Corbin.

While the $13,860 was approved out of contingency funds to add the additions to the  three new vans, commissioners asked Angel to look into costs associated with correcting the existing four vans. While upgrading them may not be done right away, commissioners agreed that due to safety concerns, coming up with a plan to address the issue over time would be beneficial.