Torrential rainfall throughout February has caused multiple landslides, dozens of road collapses, and has destroyed riverbanks across Western North Carolina. The Little Tennessee Greenway succumbed to damage that county officials are still working to assess.
Mike Cope, director of Macon County Maintenance Department, said his department is still working to review the damages.
“At this time we are still assessing the damage and requesting the proper permits to be able to repair what is needed,” said Cope. “Because we are still looking at it, I do not have a cost to repair damaged areas at this time.”
According to the Coweeta Hydrologic Laboratory which keeps track of precipitation in the region, 20.57 inches of rainfall fell in Macon County. The average yearly rainfall is around 55 inches.
The Little Tennessee flooded over its banks in several areas around the county as the rains poured down. The river overflowed well beyond the banks, swallowing benches, signs, and trashcans placed along the greenway. 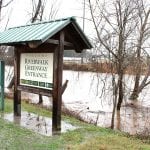 Cope, with the help of the Friends of the Greenway (FROGs) have been working to clean up debris and remove mud and branches from the popular recreational path.
“Other than normal debris and sand in the greenway paths, the major damage was because of erosion to the river banks and we are waiting on the proper paperwork and approval form the army corps of engineers,” said Cope.
The impact of the erosion along the banks is a cause for significant concern; more so than just mud left behind on the greenway. The infrastructure of the riverbank has been compromised and sediment has poured into the river, which could impact wildlife.
With additional rains forecasted in the coming days, Cope said without stabilizing the already damaged riverbanks, the next round of rains could be detrimental.
“Our biggest concern at the moment would be more flooding with the river banks weakened by previous weather,” said Cope.
Rita St. Clair with FROGs, said they have volunteers waiting for a final assessment to begin a complete cleanup and restoration.
“We will be on stand-by to assist where we can and will call for volunteer assistance when we can identify need beyond what the county will be doing,” said St. Clair. “Our immediate concern is the Butterfly Garden, but it’s also too soon to take a good look at it.”