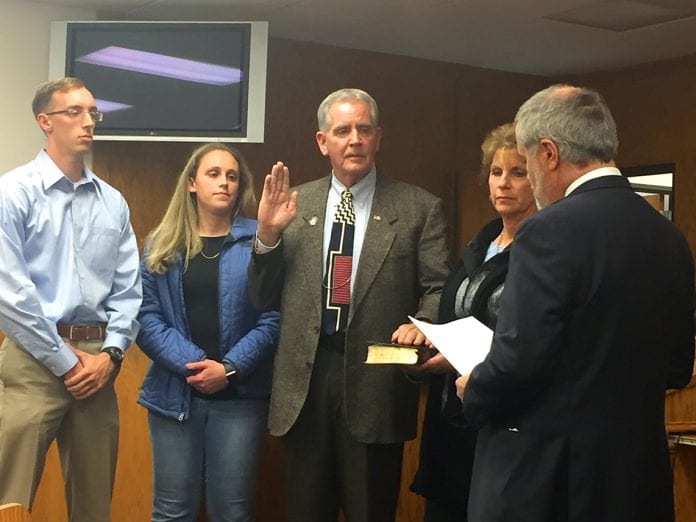 “Do you want to just take the oath all at once or individually?” asked Superior Court Judge William Coward with an air of jest. Macon County Commissioners Gary Shields, Ronnie Beale and Jim Tate mumbled. This was their moment in the spotlight. Fourteen family members were in attendance, each armed with cell-phone cameras.

The oaths were administered individually.

Judge Coward centered himself so the American flag would appear in the background of the photos, then read each of the oaths out loud as if he were the commissioner in question. Each commissioner with right hand raised and left-hand on their family Bible, answered “I do” before broad smiles, handshakes and applause.

Republican Jim Tate was returned the gavel that was temporarily in reserve and was reelected chairman of the Macon County Board of commissioners. Democrat Ronnie Beale was reelected vice chairman, nominated by his Republican colleague, Gary Shields.

An abbreviated meeting began with a debate as to whether or not it was necessary to motion to approve the 2019 meeting schedule if there were no changes to meetings being held the second Tuesday of the month, except when it falls on a holiday. It was decided no motion was necessary.

County commissioners were also briefed on preparedness for adverse weather conditions should a snowstorm hit the area this weekend. If any public offices are closed, media will be immediately notified. Law enforcement and public works are considered essential positions and will be working regardless of the conditions. Tate reminded the group that the county is not responsible for clearing roads.

NCDHHS updates guidance on who should undergo testing for COVID-19