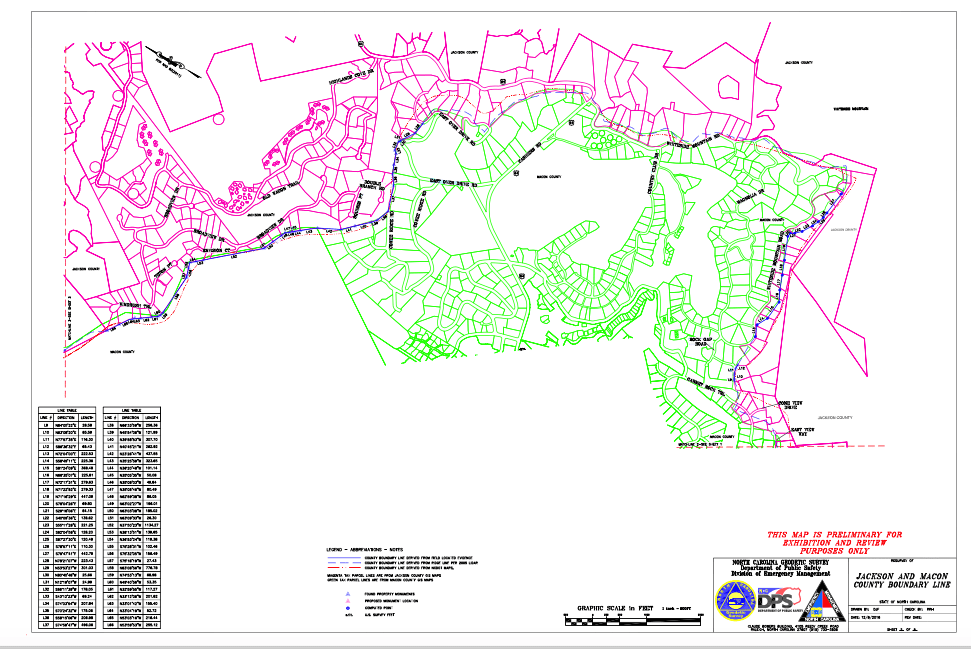 Macon County Commissioner Jim Tate has spent the last four years working with State, Macon and Jackson county leaders to decide on where the county line runs between Cashiers and Highlands. The North Carolina Department of Public Safety’s Emergency Management Division has completed an extensive survey of the Macon County border lines and has issued a preliminary report to the county.

“The preliminary report from the state used boundary information from information derived from three sources,” said County Manager Derek Roland. “It was based on field evidence, ride line information from 2005, and North Carolina Department of Transportation maps.”

The maps show where the county’s boundaries are based on those three sources. Roland said the next step is for the state to combine all three sources and develop an average and then issue a final boundary line to county officials.

“After we get word from the state on a final boundary line, we will work with Jackson County to reach an agreement on the county line,” said Roland.

Preliminary reports show that the state’s analysis of the county line won’t change much in terms of acreage or tax revenues changing from one county to another, which ultimately doesn’t address the issue that prompted the research in 2014.

Beginning in 2013, Tate wanted to look at the county line based on the fact that areas in the Highlands and Cashiers areas were landlocked by national forests, and while the only way to access the areas in questions was through Macon County, the county line indicated the homes were in Jackson County. Due to geography and other factors, the homes receive services from Macon County, but pay taxes to Jackson County, meaning such things as law enforcement and emergency management were being provided to Jackson County residents, at the expense of Macon County taxpayers.

“We started this process because Macon County provides several services to the Jackson County portion of Highlands, for homes in Wildcat Cliffs Country Club, Highlands Falls Country Club and Cullasaja Country Club,” Tate reminded the board last week. “We are talking about a substantial amount of money, somewhere in the billions of dollars in home values for these areas.”

Tate reminded the board that the county line dispute was brought to light several years ago when a constituent asked why he was being taxed for eight acres in Jackson and five acres in Macon when he only owned 10 acres of property.

Roland noted that while the county only has preliminary data at this point, if the boundary lines aren’t redrawn to address the discrepancies in services offered versus taxes paid for such services, the county will continue to work with Jackson County to address the issue.

“This is a very real issue and something we plan to continue to explore,” said Roland. “We will continue to work with Jackson to decide how to move forward with providing these essential services to these areas if they remain in Jackson County, while making sure the burden of funding the services doesn’t fall on Macon taxpayers.”