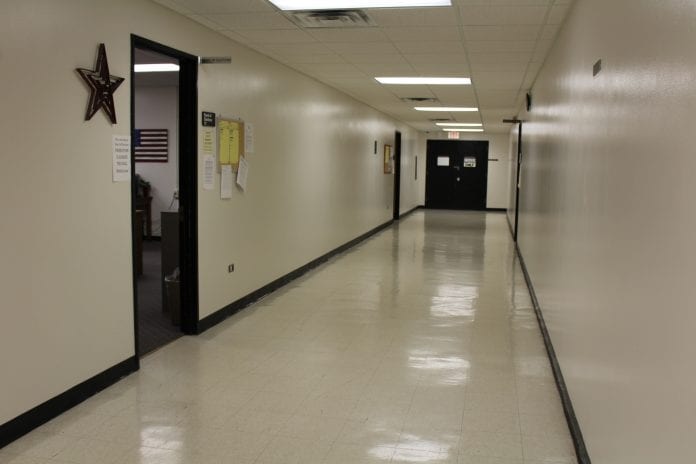 Residents in Nantahala have been outspoken about infrastructure concerns at county facilities over the last few months and last week, County Manager Derek Roland and County Commissioner Paul Higdon updated the board on possible solutions.

“We know there are a lot of channels to go through and a lot of moving parts, but we have to start somewhere,” Commissioner Higdon said.

Higdon, who represents the Nantahala District, has been instrumental in orchestrating meetings between county officials and members of the Nantahala Community and updating the board on possibilities to address infrastructure needs in the community.

The Nantahala Community Library is located in a doublewide trailer on the Nantahala School campus.  In the past, as the Nantahala Library has needed repairs, funds have been provided for such out of the county’s maintenance budget, in addition to the operation dollars provided to Fontana Regional Library.

Members of the Nantahala Community would like to see the library improved, or even a new one constructed. In the past, the issue has been the lack of county property on which to build a new library. The Macon County Public Library in Franklin was built on county property and was funded by the county in 2005. Prior to moving to the current building, the library was located within what is now known as the Senior Services Center.

Higdon has been working with members of the Nantahala Community to identify possible new locations for the library as well as a community building for Nantahala. A possibility has been identified on the recreation park property in Nantahala. Duke Energy owns the property, but has permitted the property for county use. While there are several hurdles to overcome, Commissioner Higdon is optimistic that starting the process could address several of the concerns voiced in recent months by residents in Nantahala.

In addition to concerns in Nantahala, Commissioner Higdon has also been advocating for a relocation of the Macon County Board of Elections office.

Higdon said because of the board of elections office being located next to the probation office, he wouldn’t want his wife working there, due to safety concerns.

Macon County Sheriff Robert Holland said that the county’s board of elections office has been in the forefront of discussions involving overall courthouse security.

“We have a committee that has been evaluating the security of the courthouse as a whole, and while that process is ongoing, we have been actively discussing the board of elections office,” said Sheriff Holland.

Holland said the current board of elections location is being evaluated not only for safety concerns, but also because by law, access to voting locations can not be restricted, so other changes being considered at the courthouse house may result in the office needing to be moved to prevent that from occurring.

Higdon noted that in addition to safety, the current board of elections office isn’t handicap accessible and if the elevator was to break down, there would be no way for a wheelchair to exit the building.