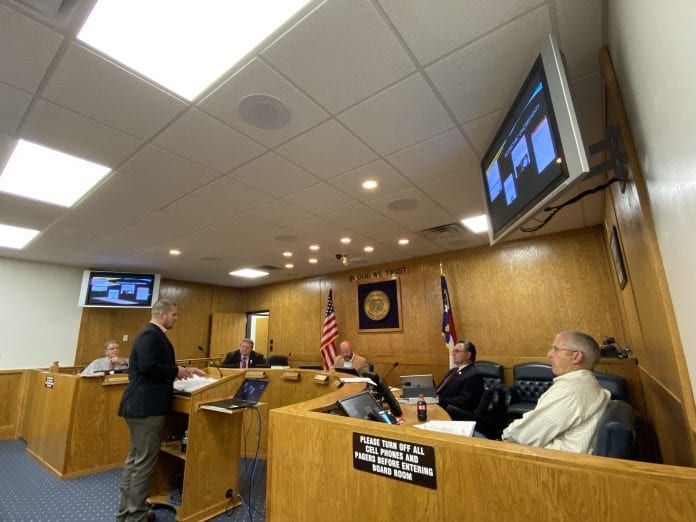 Macon County Manager Derek Roland presented his proposal for the county’s $52.3 million budget Tuesday night. Like many governments across the state, Roland’s budget proposal included a level of uncertainty as the lasting implications of COVID-19 remain to be seen.

“We really just don’t know,” Roland said of what to expect in terms of financial impacts of COVID-19 in the coming year. “We don’t have anything else to compare this uncertain time to, so all we can do is plan using the data and predictions we have been given.”

Roland noted that while substantial declines in revenue brought about by the pandemic presented many challenges during the budget process, the county’s fund balance is helping Macon County remain in good financial position.

“In the coming fiscal year, Macon County will prove its ability to continue operating under what is projected to be a worst-case economic outlook, without adversely affecting employees, primary services or our solid financial position,” said Roland. “This could not have been accomplished without the hard work and willingness to compromise shown by all department heads throughout this budget process. As required by state statute, the budget is balanced with revenues and expenditures of $52,302,445 and is hereby submitted for your review and consideration.”

In an attempt to keep the same level of service across the county and retain all employees during a time when many local governments are laying off workers, Roland’s budget included a nearly $1 million reduction in expenditures, most of which were made to capital projects.

Roland proposed eliminating the Macon County Adult Dental Clinic, which has seen a steady decrease in participants since 2018.

“A continued decline in participation at the Adult Dental Clinic combined with the inability to recruit and retain a dentist or dental hygienist will lead to an estimated revenue shortfall in the program of $99,798 for coming fiscal year,” said Roland. “Due to significant revenue loss anticipated in the coming year and uncertainty surrounding economic recovery, the FY’21 operating budget cannot continue to absorb annual revenue losses in Adult Dental, without sacrifice to those services upon which the majority of our residents depend. As a result, the FY’21 Recommended Budget proposes to eliminate the Adult Dental Program.”

The Adult Dental Clinic provided services to 366 individuals, or approximately 1% of the county’s total population last year. The dentist position in the Adult Dental Clinic has remained vacant since March 2018, despite continued recruitment efforts by MCPH, including a significant increase in the starting salary amount in the current year budget. During this period, MCPH has contracted with a staffing agency to fill the dentist position, as needed. While this arrangement has enabled the service to continue, the annualized rate charged by the contract dentist is 32% higher than the $180,937 total compensation package budgeted for a full-time dentist. In addition to the significant rate increase, MCPH also must pay mileage reimbursement and overnight lodging costs for the dentist. The dental hygienist position has remained vacant since September 2019. This position, has also been difficult to recruit as well as retain, due to higher starting salaries offered by the private sector. Similar to the arrangement with the dentist, MCPH pays a premium to fill the hygienist position using contract labor provided through a staffing agency. The annualized rate charged by the contract hygienist is approximately 19.3% higher than the $69,515 total compensation package budgeted for a dental hygienist position.

Roland proposed leaving the school system’s operational budget flat while reducing the district’s capital outlay budget by $250,000 – a decrease he is hopeful will be offset by federal funding available through the CARES Act.

“The FY’21 recommended budget proposes a decrease of $275,000 to the school system’s annual capital outlay budget which is a 9.5% decrease from the average capital funding amount received by the schools during the three prior fiscal years,” said Roland. “While this reduction is substantial, reduced overhead costs and annual wear and tear at facilities resulting from extended closures in FY’20 combined with nearly $200 million in COVID-19 statewide school relief, should help to offset this reduction. This reduction, which will be re-evaluated mid-year as well, does not adversely affect the learning opportunities of students or the livelihoods of locally supported school system employees.”

Roland also noted that the future of the Macon Middle School renovations will be temporarily on hold. According to Commissioner Ronnie Beale, the $15 million anticipated to fully repair the aging facility would prevent the county from being able to secure another loan for more than seven years. That renovation project will be revisited and prioritized before moving forward.

Roland proposed a budget increase of $186,151 in the coming fiscal year of 4% to cover the increased cost of health insurance for county employees.

“While this is an increase to the operating budget, it remains well below those experienced in the two prior fiscal years at 24.27% and 10.9% respectively,” said Roland. “Health insurance accounts for $4,242,893 in FY’21 or approximately 8% of the FY’21 operating budget.”

Roland proposed county commissioners revisit capital expenditures requested in the budget by January 2021, when the county will have a better picture of the impacts of COVID-19.

“Rep. Kevin Corbin also told us this week that Macon County would be receiving $833,000 for COVID-19 relief funds, but we aren’t sure how or when that money would come to the county governments or how we can use it,” said Roland. “When we receive clarification on that, those funds could be used to address other needs in the budget.”

Any new position requests, new vehicle requests, or any change in capital expenditures such as software and equipment needs will be re-evaluated in the middle of the year.

Macon County Board of Commissioners are set to hold their first budget work session on May 26 to discuss potential changes. A public hearing on the budget is scheduled for June 9 at 6 p.m. The budget, along with the county manager’s budget message, can be found at www.maconnc.org.

School board informed on career and technical education classes

Butterfly education and identification a surprise at Labor Day picnic