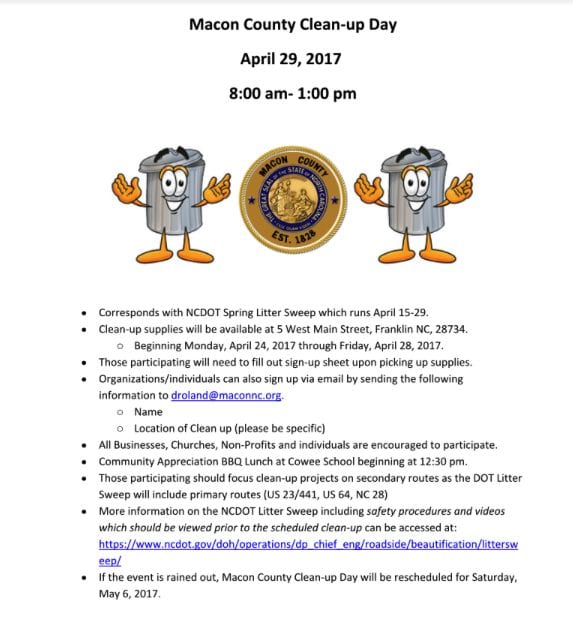 After residents of Macon County spoke to commissioners last week urging something be done about litter on the roadsides, county leaders got to work organizing a county-wide event to address the issue.

“Keeping our county clean for both the residents and our visitors is important and we wanted to do something to make sure that happens,” said County Manager Derek Roland. “We want to encourage the community to get out and help pick up trash on our roadsides and to thank them for their efforts, we want to host a free community BBQ lunch.”

Twice a year, the NCDOt hosts a Litter Sweep — a statewide roadside litter cleanup initiative. This year, Macon County leaders plan to promote the event and encourage participation by providing a free BBQ lunch at Cowee School after the clean up.

The litter sweep is promoted from April 15-29, with Macon County hosting their clean up day on Saturday, April 29. The county plans to partner with Mainspring Conservation and other community organizations to assign portions of Macon County’s roads to collect trash along the roads. Beginning at 12 p.m at Cowee School, a county sponsored lunch will be served to volunteers.

Litter is a problem across North Carolina, not just Macon County. Not only is it illegal, but its costly to taxpayers. North Carolina’s state highway system covers roughly 79,000 miles, with an average of 16,000 pieces of litter flanking a mile of roadway over the course of a year. In 2015, NC spent $15 million to clean up seven million pounds of trash from the roadways.

According to North Carolina Department of Transportation Division 14 Roadside Environmental Engineer Keith Blazer, the DOT is responsible for maintaining 141 miles of the county’s main roadways, US 23, US 441, NC 28, and US 63. The NCDOT conducts litter cleanups on those highways every other month, or six cycles in a calendar year. It cost the state about $6,800 each cycle in Macon County.

While the DOT cleans up the main highways throughout the year, that leaves 546 miles of secondary roads in Macon County unattended. Blazer did note that based on budget allocations and manpower, when the DOT is able, they do clean up the problem areas reported on secondary roads when they can. Outside of that, secondary roads are predominantly cleaned up by the community and through state programs such as the Adopt a Highway program.

The Adopt-A-Highway Program (AAH) was established in 1988 by the North Carolina Department of Transportation (NCDOT) in response to growing public concern regarding litter along the state’s highways. The AAH Program is administered by the NCDOT Office of Beautification, and is a joint effort between community volunteers and the NCDOT. Its purpose is to decrease the amount of litter on North Carolina’s roadsides and improve the beauty and quality of the environment.

In Macon County , there are 46 active roadsides registered under the Adopt-a-Highway program. With each stretch typically running about two miles, 92 miles of the county’s 546 miles of secondary roads are managed through the program.

There is no fee associated with adopting a roadway, but there is a four year agreement between the NCDOT and the volunteer(s). The agreement requires a roadside litter cleanup four times a year and related to both sides of the road within the section of roadway. Filled bags of trash will be picked up by the NCDOT when requested through the cleanup report. Volunteers can obtain safety vets, gloves, and bags at the local county maintenance office.

Blazer believes that interest in the Adopt-a-Highway program has increased over the years, with more inquires being placed with his office.

“I think as members of the community see the main highways clean, they want to know how to do the same thing in their communities, and thats where the program comes into place,” said Blazer. 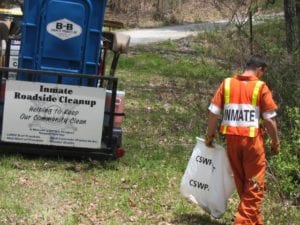 Macon County roadsides were frequently cleaned by inmates being houses at the Macon County Detention Center, a program that was stopped in 2014 when Sheriff Robert Holland reevaluated the work release program for safety reasons.

“We took a look at what we did procedurally and evaluated what extra steps we could take to prevent any escapes,” said Sheriff Robert Holland. “We needed to look at where any possibility of an escape could be even though we had routinely looked at that.  Following that review the Inmate work program was the only possible gap we saw in procedures. The only portion of that gap would be the fact that when outside our facility inmates involved in our work detail were not shackled and handcuffed.  Doing so was an impossibility so therefore we stopped the program permanently or until we able to resolve any concerns.”

Prior to the program ending, inmates picked up trash in Macon County starting in 2004 when the Sheriff implemented the work crew program. In 2013, inmates collected 4,480 pounds of litter, and in the programs 10 year run, bringing the total amount of litter collected to 242,512.

Macon County’s BBQ Event is open to those who RSVP at time of sign up for the litter clean up day. Sign ups are open now by stopping by 5 West Main Street or emailing droland@maconnc.org.  Clean up supplies such as vests and bags will be available at 5 West Main Street as well beginning on Monday April 24- Friday April 28.

Town hears from public on Nikwasi deeding, plans up or down...