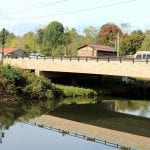 The Little Tennessee Greenway has been a fixture in Macon County since it was first constructed in the late ‘90s. A public/private collaboration between Macon County, the Town of Franklin, North Carolina Parks and Recreation Trust Fund, NC Clean Water Trust Fund, and Friends of the Greenway, The Greenway winds in and around Franklin along the Little Tennessee River, meeting the entrances of parks, hosting Story Walks for Read2Me, and providing a unique view over the river and around the lush landscape of Franklin. 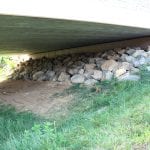 The Little Tennessee River Greenway is one of more than a thousand such trails snaking their way across America turning old canals, abandoned rail beds and forgotten riverbanks into green recreational corridors. The Greenway represents a voluntary local strategy to preserve scenic, natural, historic, cultural and recreational resources and promotes increased public access to the Little Tennessee River through the creation of riverside parks and trails.

Macon County Commissioners voted to enhance the Greenway last week, voting to take the lead on the Greenway connector project which will connect the Greenway that is interrupted by the bridges across the Little Tennessee. The plan is to connect the portion of the Greenway that currently ends beside Wesley Park to the other side of East Main Street along the new pedestrian bridge downtown.

Macon County Planning Director Jack Morgan spoke to commissioners last week to notify them of an available grant with the North Carolina Department of Transportation that will provide a 30/70 match to connect the Greenway. The county’s portion would be 30 percent of the overall cost.

The project would consist of extending the Greenway under the town bridge, which is property owned by Macon County and an encroachment for DOT. Because of a 14-foot elevation change under the bridge, grading would would have to be completed to ensure the connector is ADA accessible.

According to Morgan, the project will cost around $70,000, which would leave the county with a $21,000 bill. With the cost to pave that portion being estimating to cost $24,000 alone, Morgan said the partnership with DOT would be beneficial to the town.

The connector project will provide safe access to cross the four lanes of traffic in that portion of town. The Greenway would continue under the bridges and would connect to the new pedestrian bridge as well as the FROGs headquarters which raises money for the Greenway.

Although the Greenway is located within the Franklin city limits, funding, maintenance, and overall oversight is managed by the county as it was created using county-owned property. Macon County Commissioners took the first step in the project by voting to agree to be the lead agency on the project, which will get the ball rolling to apply for grants and the necessary permits to begin work.