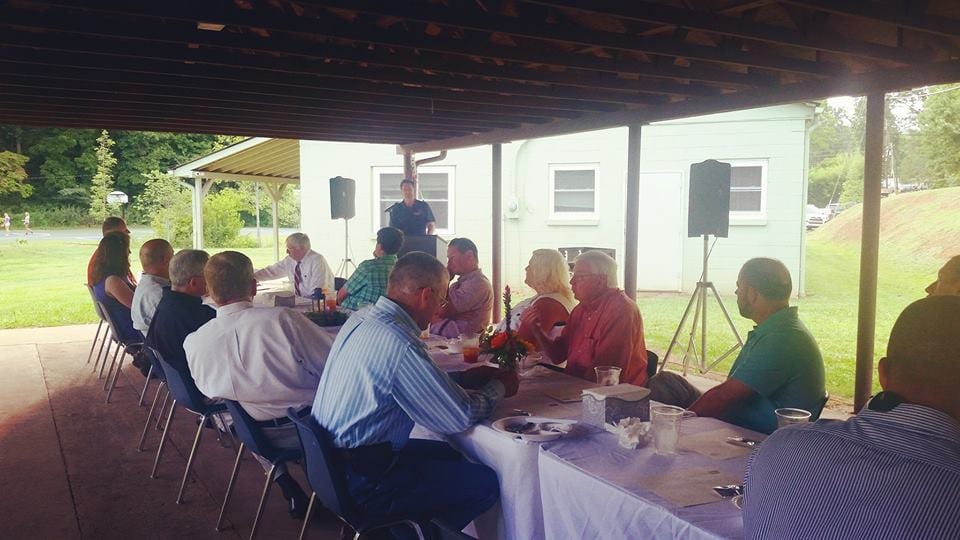 While the town of Highlands, town of Franklin, and Macon County leaders all have different focus points and responsibilities throughout the year, one thing they have in common is a duty to serve the residents of the county. From parks and recreation to emergency services, each board strives to ensure residents are afforded opportunities in Macon County that are top notch and unmatched by any other in the region.

Some of those projects were the topic of discussion Tuesday night at Franklin Memorial Park in Franklin as the town of Highlands hosted the second of three meetings that occur each year between Macon commissioners, Franklin aldermen and Highlands commissioners.

“Working together to share ideas and to keep each other informed on projects and priorities allows all of us to best serve the residents of Macon County and that is exactly what we were all elected to do,” said Macon County Commission Chair Kevin Corbin. “These meetings allow us to see each other face to face and sometimes that can be more effective than picking up a phone or sending an email.”

Franklin Mayor Bob Scott started the meeting by introducing officials to the improvements made to the memorial park so far this year including a partnership with Mainspring Conservation Trust to preserve the spring that runs through the park and the town’s initiative to upgrade the basketball court.

Scott highlighted the town’s multi-year process of utilizing a $32,000 grant from the North Carolina Department of Transportation to develop a bike/walk plan for the town of Franklin to make the downtown area more pedestrian and bicyclist friendly.

Corbin touched on the economic growth Macon County as a whole has experienced over the last year with incentives such as the expansion of TekTone and Harmony House Foods and a full schedule at the Parker Meadows Recreation Complex.

“We compared sales tax revenues from March  2015 to March 2016 with the only noticeable difference being that this year, we held two large tournaments in March at Parker Meadows,” said Corbin. “In March 2016, we saw a 35 percent sales tax increase over the same time period last year.  Those tournaments brought upwards of 80 teams to Macon County and those families ate in our restaurants and shopped in our stores. That was just March, we have a fully booked schedule through the end of the season and we expect to see that growth when numbers for the rest of the summer come in.”

Highlands Mayor Pat Taylor agreed with Corbin and said that the Highlands economy has seen improvements over last year and with summer being their busy season, Highlands has seen an increase in visitors this year. Taylor also commended Macon County Commissioner Ronnie Beale on his efforts with the North Carolina Association of County Commissioners to ensure that the state legislature doesn’t change the way sales tax is distributed to counties in the state. Taylor noted that while they were worried about redistribution negatively impacting the Highlands budget, Beale and other advocates in the state were able to stop that legislation and prevent Highlands as well as Franklin for losing significant revenues.

Tuesday’s meeting was the second in a series of three meetings that have been held annually for years between the three boards. Each board takes a turn in hosting the meeting which are held at local restaurants or at facilities playing large roles in the communities such as the Cowee Heritage Center, the Highlands Biological Station and Franklin Memorial Park.