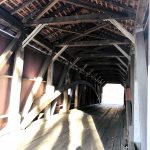 Traveling to visit friends and family during holidays and while on vacation presents opportunities to experience historical, cultural, and natural sites. A recent trip through Lancaster County, Pa., offered up a chance to follow one of numerous driving options to see historic covered bridges, as well as countless farms operated by multi-generational Amish and Mennonite families.

Covered bridges evoke romance, nostalgia, curiosity, and more. Often referred to as “kissing bridges” because of couples using them as rendezvous points, they have also served historically as a spot for people to meet and discuss community issues. While covered bridges are not as prevalent in Macon County – except for the one on the Little Tennessee River Greenway – they are scattered throughout the countryside in other areas of rural America. Although bridges are rarely covered today and only about one in 10 of the original historic covered bridges still exist in the United States, the purpose of “covering” a bridge was to protect the wooden structural aspects from wear caused by weather conditions.

At least 25 bridges are included in a downloadable, PDF, numbered map and corresponding site list through discoverlancaster.com. Also included on the site is a suggested day-long itinerary.

Besides the name of the bridge, the list includes each bridge’s length as well as the waterway it crosses. Most bridges exhibit signage explaining when and how the bridge was built and by whom.

A native of Pennsylvania and a frequent visitor to Franklin, Dan Finnerty pointed out, “Having lived in York County for over 14 years, I’ve occasionally visited Lancaster County a few times with church friends and family to view some of the covered bridges located throughout the region and at each one is an informational plaque worth stopping and reading.”

Often the bridge’s history involves someone or something significant to the region. All bridges on the motor tour were built from the middle to the latter part of the 19th century. Many of the bridges were submerged and some were damaged during the area’s catastrophic flooding in 1972 due to Hurricane Agnes, which caused more than $2 billion in damage in Pennsylvania – including 68,000 homes and 3,000 businesses destroyed. Forty-eight deaths were reported.

However, all the damaged bridges were repaired and restored.

The covered bridge touring information through discoverlancaster.com also provides prompts regarding best routes to take as well as where to stop for foods, gifts, photos, and more. For example, a few of the bridges are located in the “charming” town of Lititz. Travelers are encouraged to explore the Moravian-founded town and partake of handmade chocolates and pretzels at a few traditional shops.

Plus, at each covered bridge is either a full-parking lot or a pull-over area for one-to-a-few cars. Picture taking is popular, and a few bridges, such as Kurtz’s Mill Bridge, are adjacent to designated walking trails. Some areas near bridges offer benches, picnic tables, or grassy areas ideal for picnicking.

Amish markets are aplenty on the route, and travelers can peruse hand-crafted toys, furnishings, quilts, accessories, and much more. Also visible are Amish one-room schoolhouses.

“It is always interesting to see Amish families traveling in their horse and buggies to and from their homes,” said Finnerty. “Sometimes you can be fortunate enough to see workers in the field with horse-drawn plows or school children walking to and from school in their distinct Amish clothing.”

As is the case for many historic landmarks in these United States, anyone who finds themselves in or near Lancaster County, Pa. – no matter the season – schedule time to explore the many fascinating covered bridges, and view some of this country’s most historic culture and pastoral landscapes at the same time.