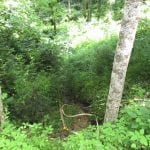 Calling Cowee Fire and Rescue last week was an act of desperation for Roseann Sutton. After trying several contractors and finding they were either out-of-business, unavailable or cost prohibitive, she felt she should call someone she could trust. Having had experiences dating back more than four decades with the fire department in a suburb of her native Aurora, Ill., she felt a familiar tugging that maybe they could help with her stopped up culvert. It was a welcome sight when Lieutenant Killian Carpenter showed up.

Sutton was traveling during the recent torrential rains and had asked a neighbor, Sue Jones, to watch her property, and the neighbor offered to watch her dogs as well. Jones knows Sutton takes care of her property and spends time and money making sure the road is repaired. True to her word, Jones was checking to make sure nothing was sliding down the hills. She called and said the ditch was filling up but she would keep an eye on it.

“When I got home, I called the volunteer fire department because the ditch is about six to eight feet deep but was about to reach the top and I couldn’t find anyone to unplug it,” said Sutton. “I said ‘the drain is clogged and filled somehow; I’m afraid of losing my driveway. Can you help?’  Within 10 minutes they were at my door.”

Carpenter assessed the damage and said he’d be back with the truck and try to flush it out. He returned with seasoned firefighter Autumn Johnson and intern Andre McDonald. It took two trips to drain the water, but they were unable to unplug it because something was wedged hard and wouldn’t budge. Sutton was thankful for their efforts and especially after seeing Carpenter emerge from the hole splattered in mud from head to toe.

Sutton is also thankful for the times they helped with a chimney fire and with her late husband who became an invalid shortly after they moved to Cowee in 1995. In later years, she had called for assistance when he had fallen, and they helped get him to the hospital in 2016.

“On another occasion, I had asked one of the firemen ‘do you do windows?’ as a joke,” said Sutton. “He said ‘yes we do.’ All I had to do is call them and they will help. It’s been a comfort knowing I can call someone because I’m elderly, alone and way out. I didn’t know they existed until I called to get insurance on the house and it helped my rate. When you run out of the road, you keep going because I’m on the other side of the boonies.”

Sutton remarked how times have changed over the years and how easy it is to reach the department. What continues to amaze her is the average 10-minutes or less response time. She laughs now about a time when she shared a 10-party line with phone customers in Sheridan, Ill., and it took that long to get the line cleared.

“The boiler in our home blew up and it was a mess, and I said ‘please get off the line so I can call the fire department because my boiler just blew up!” said Sutton. “I tried to get the neighbor off the line, and she said ‘what some people won’t do to get a line.’ When I finally got through, within 10 minutes there were 20 to 25 men in my yard – all volunteers who ran to help.” This impacted Sutton so much that she began the ladies auxiliary at the fire department in her former community. They earned money to buy equipment by hosting yard sales, bake sales and similar events.

Little did she know that about two decades later somewhere across the United States in a community where she would eventually settle, a small fire department was using a similar approach to get started. Pendergrass shared how the Cowee Fire and Rescue fire department began about that time.

“We wouldn’t have the fire department without the community,” said Pendergrass. “Back in the early ‘80s when they first started forming this fire department, the original auxiliary team was formed with community members that were willing to be part of the fire department. There were some who went door-to-door asking for donations just to drill the well for the first station.”

He said it took from 1982 when the first meeting was held at the Cowee School until 1991 to become a certified, recognized department. They canvassed and worked diligently to get the required 20 minimum members and to keep up community support. They all went through the training and were totally supported by personal investment and community donations.

“Since becoming a certified fire department in the state, we’ve grown tremendously,” said Pendergrass. “That was before my time on the fire department. I just finished 19 years in April and next April will be 20 years for me.”

Pendergrass had wanted to be in emergency services since he was a child. He joined in 1999 as a junior fire fighter at 14 years old and progressed through several positions with Macon County Emergency Services and Cowee Fire and Rescue. Today as chief he admires the community spirit of his team and doesn’t take credit because the leadership style was passed on to him by his earlier mentors. They included Larry Pickens who was his first assistant chief but served as chief for 11 years. Another is Wayne Pruitt who was the chief for 10 years after that when Pendergrass was his assistant chief. He picked up training on equipment and truck maintenance from Pruitt but keeps the same drive, determination and community spirit that was evident from former leaders.

He’s happy to hear Sutton’s admiration of the team who helped her because he feels they all exemplify that spirit. When asked what drives them, each firefighter who showed up said, “helping the community.” Speaking for the entire team, Pendergrass elaborated on community spirit and the team that helped Sutton.

“The passion and the willingness to drop what they’re doing to help their neighbor, that’s always been a philosophy of mine – helping out our neighbors in their darkest or most troubling times,” said Pendergrass. “Most of the time when our community sees us, it’s in an emergency setting. It’s nice for us to be out in the community doing things to help out where it’s not during those troubling times – a house fire, or vehicle fire, medical call or water rescue. You saw them out in the community yesterday helping that lady with her culvert pipe. That’s what’s it’s all about. Our citizens down here pay a fire tax to have this fire department, and we try to show them above and beyond just fighting fires and answering medical calls, wrecks, and rescues. You know there’s more that we can do for the community to help out. We have very dedicated members who are willing to respond at 3 in the afternoon or 3  in the morning.”

Carpenter has full-time career Monday through Friday and volunteers on his days off. McDonald just graduated high school but wanted to get involved and loves to come down several days a week. When he turned 18 he began his internship and is working on his certification. Johnson has been part-time with the department four years and is a career firefighter for West Macon. She and Carpenter were members who went through the Southwestern Community College fire academy and did well. That’s six to seven months of training and 600 hours.

Support in the Cowee community has grown and now they willingly contribute a fire tax that has reaped benefits. There are now three fire stations: the main station is on Ruby Mountain Road; the second one renovated in 2004 from two to five bays is on Oak Grove Church Road; and the third located on Mason Branch Road was constructed in July 2017 and now serves a large population previously outside a five-mile district. In addition, all the fire departments have completed their testing this year and Pendergrass will be announcing the new Class 5 insurance rating that becomes effective October 1. Mason Branch and others will now experience better insurance rates like Sutton.

“All the fire departments have completed their testing this year, and we are pleased with our new insurance rating,” said Pendergrass.

Community and communication are important to Pendergrass. The departments participate in community events such as the folk festival where they cook and provide barbeque, their own Singing in the Valley event, activities at Cowee School and mowing the grass there. They have a community newsletter, a Facebook page, Cowee Fire and Rescue, and a website at www.CoweeFireRescue.org. To further reach community: the department has engaged Misty Carpenter as their volunteer events person; is available for speaking; attends community development meetings; and invites all to their annual meeting. Community awareness and trying to keep the community informed is very important, and the Cowee Community Development Organization is a great vehicle for passing along that information.

Through the spring season and the fall season – brush fire season – when we have the drought situations, try to limit your outdoor burning if at all possible,” said Pendergrass. “Call the fire station or the N.C. Forest Service and get the burning permits; and make sure that if you have to burn, do so when it’s safe and you have water and equipment there. Clean your ashes out from the chimney if you used wood heat in the winter, and make sure your ashes are in a metal container and stored out somewhere safe. Before the heavy rains come in spring, make sure your culverts and ditches are clean of debris and leaves. This will prevent culverts getting stopped up because flooding will start just from the runoff and can wash roads and driveways out.”

The department practices safety and is always most aware of downed power lines whether fighting fires at structures or responding to vehicle wrecks.

Pendergrass and his team consider community family and are close to them. They understand family because several husband and wife teams work in the same profession or their spouses are supportive, and the baby population is booming too. Pendergrass and his wife are included because she works with Cherokee Travel Fire department on the reservation and she is a volunteer at Cowee. They have a two-year old child and are expecting another. Johnson and her husband are both emergency workers and he is also an instructor.

“We’ve seen a wave over the last couple of years where several members have gotten married and have children and with recent births and expectancies,” said Pendergrass. “We have a good laugh saying we need a daycare here at the fire house.”

Pendergrass has a good long career and practices stress and safety management, accommodates training and keeps an open environment so firefighters don’t hesitate to communicate effects of bad calls. He appreciates the volunteers and hates to know what the budget would look like if nobody volunteered and they were all career firefighters.

“As long as the good Lord will let me do it, I’m going to continue to do it. I m very proud of this community, and I’m very proud of our members,” said Pendergrass. “Everyday is a new day to learn something in emergency services – you never stop learning. We train together, we pray together and we fight fire together.”

Sutton encourages everyone to get to know their emergency workers and support them whether attending a community event or donating to a jar for one of their causes.

“We take it for granted. I really just wanted to say ‘thank you’ and shed some light on their unselfish deeds.”