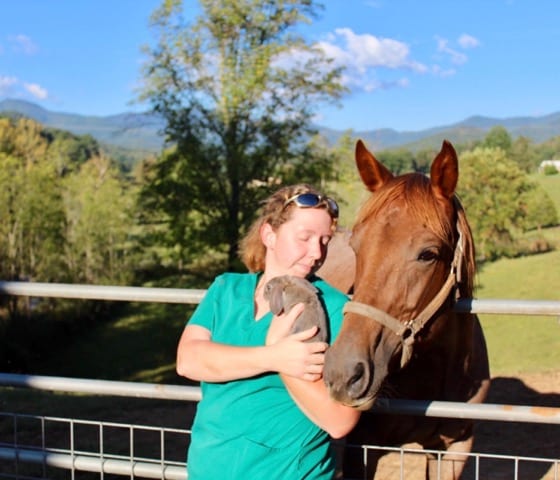 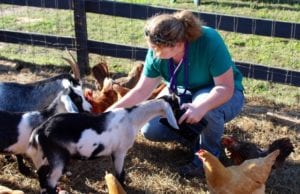 Growing up on a cattle farm, Jessica Scruggs was initiated from birth into a lifestyle that would provide her with a unique career. Known to many as “Cowee Girl” Dr. Jessica Scruggs operates a mobile veterinary operation in Macon County and specializes in large breed animals.

Scruggs’ family has owned and operated a 100-150 head beef cattle farm (Angus, Charolais, Hereford cross cows and bulls) since the 1940s. It was that day to day interaction with animals as a child that Scruggs credits her passion as an adult.

“Growing up I helped on the farm as much as my traditional grandmother would allow me to, always trying to keep up with my brothers, with the theory that anything they could do, I could do, too,” said Scruggs. “I have always loved animals, especially cattle, though I may be a little biased there. Most little girls want horses and ponies growing up, all I wanted to do was be out in the cattle pastures or hay fields.” 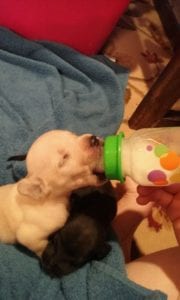 veterinarian serving all of Western North Carolina, but the 2004 Franklin High School graduate said her family helped her along the way.

“I have been raised by some of the most amazing, strong-willed, God-fearing people that anyone could ever be blessed to have in their lives,” she said. “My momma is my rock and keeps me grounded and going on a daily basis.  My uncle, who I call Unck, is more like a dad to me than any man I have ever known, along with my Nanny, Granny Lou Lou, Hugh, brothers, and other family members, I am very blessed.”

While at Franklin High School, Scruggs took advantage of the school’s agricultural classes and was active in the Future Farmers of America, raising pigs and steers. Scruggs got her start early, and before she ever entered high school, she helped her oldest brother who also raised pigs and steers during his high school career.

“After high school, I attended Berea College in Berea, Ky.,” said Scruggs. “Berea is a workstudy college, therefore you are assigned a job at the school upon acceptance, this in turns pays for your education as well as a way to pay it forward due to the full-ride scholarship you get upon acceptance.  During the duration of my study there, I worked on the student run farm. During my junior year there, I became the youngest student cattle manager and retained the position also during my senior year.” While attending Berea, Scruggs spent two years combined working at the Lexington Livestock Disease and Diagnostic Center, learning how to do field necropsies and diagnose the cause of death, based on some signs that animals can show in their muscles and/or organs. While it is not always a clear cut case as to the cause of death, a field necropsy can offer some insight.  Scruggs graduated Summa Cum Laude in May of 2008 with a Bachelor’s degree in Agriculture and Natural Resources.  Afterwards, she attended NC State University for a Masters in Animals Science – with a concentration in Animal Nutrition – where she worked with beef heifers and steers for two years feeding them different types of feeds in the first year, then at different percentages of body weight in the second year to help producers feed the best feed and get the most bang for their buck from that feed.

“My thesis was accepted and I graduated with my Masters in Animal Science in August 2010,” said Scruggs. “That same month I started veterinary school at NC State College of Veterinary Medicine.  During my four years in vet school, I worked on the college farm.”

Scruggs worked alongside professors in both the small and large animal hospitals on cases and surgeries and gained experience and knowledge that could never be learned in a classroom. Scruggs spent her senior year clinics traveling in Kansas, Colorado, and Nebraska working on feedlots in hospital pens and with cowboys that pick out the sick cattle on 20,000-40,000 head cattle lots.

“Not an easy task by no means, but they do a good job at it,” said Scruggs. “It was a fantastic experience in field medicine.  I was also able to go to Iowa State University’s Vet School and work cases there, since their case load for cattle and swine is higher than NC State’s.  During the four years at vet school I have spent approximately three years combined in stockyards in Kentucky, palpating cattle, dehorning, castrating, vaccinating, herd health, semen testing, treating seasonal problems such as pinkeye, pneumonia, foot rot, etc.  I have experienced many things, some new and some routine, but I love this life.”

“It was one of those feelings you get when you are told that a woman is not strong enough, big enough, smart enough, or able bodied enough to handle the job,” Scruggs said. “I get it, which is fine that people once thought that. That just means that veterinarians today are breaking the traditional mold long ago created that made it where men were the only large animal veterinarians (most veterinary classes went from 85% male, 15% female in the 1980s to 85% female, 15% male in 2010s). Big difference these days.”

While her family supports her 100 percent, Scruggs said her Nanny was always convinced she should be a lawyer, and says she would still be good at it today.

“I have always been of the mindset that if I am told that I am not supposed to do something, then I am going to find a way around to doing it anyway,” said Scruggs. “Instead of being a lawyer like my Nanny still thinks I would be great at, I just feel like this is where I belong, where God called me to be.  I chose to be a mobile vet because I feel like I can make the biggest difference that way and also because for anyone that knows me, knows I cannot sit still for longer than a few minutes at a time, so this business sure keeps me on my toes.”

Being a mobile vet, Scruggs never knows what to expect. She said over the last three, she has just about seen and done it all.

“I have performed blood transfusions on goats that have become so anemic due to an overload of intestinal parasites. I have treated foot abscesses in cattle that have been so bad that I have seen them two to three inches deep on more than one hoof on the same cow,” said Scruggs. “I have had to remove toes from cattle due to infections that have gone into the joints in one of the toes. I have placed urinary catheters in goats due to them being blocked by crystals formed due to high protein diets. I have sewn up numerous lacerations, performed six cesareans (five cattle and one goat) and last, but not least, I have recently helped deliver a two-headed calf. To be honest, there is never a dull moment and it is fantastic. I would not want to work anywhere else, but here in my hometown.”

Scruggs is licensed in Georgia and North Carolina and has gone as far south in Georgia as Lakemont and Tiger with her mobile veterinary services. She has clients from Waynesville to Nantahala, to Murphy and across the border into Blairsville, Young Harris, and Hiawassee, Ga.

“My favorite animals are cattle, any and all sizes and shapes of cattle,” said Scruggs. “However, I enjoy working with pigs, horses, sheep and goats too. Chickens and other poultry can also be interesting to work with as well, along with alpacas and llamas. I have also enjoyed working with rabbits, sugar gliders, fawns (with local rehabbers), the occasional squirrel and raccoon (also with local rehabbers), and lastly, hunting dogs.”

Scruggs remembers what it was like growing up in Macon County in FFA and other youth programs and wants to encourage the future youth to continue the traditions and practices that led her to becoming a vet.

“I am a strong supporter in getting youth interested in agriculture,” she said. “With that being said, my advice is to follow your dreams, do not let anyone tell you that it cannot be done. Find your place in this world, that one thing that makes you happy and that you love to do and give it 100 percent. Some advice I have learned over the years…it is okay to fail as long as you accept that failure and grow from it. Nobody likes to fail or make a mistake in this life.  However, it is in those moments when we are down and have to pick ourselves back up, that we learn the most, not only about ourselves, but about those around us too.”