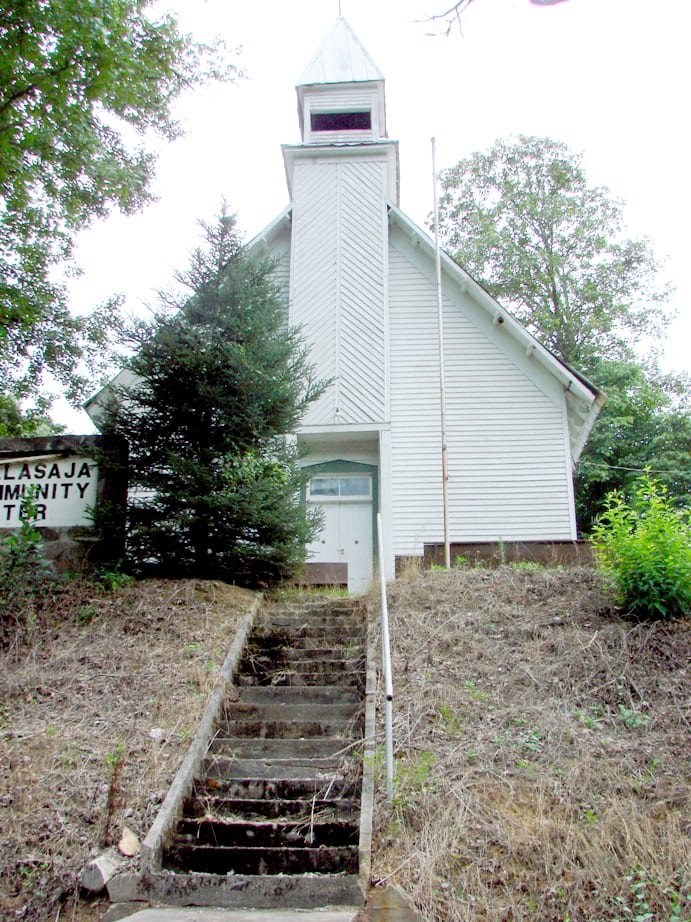 The Cullasaja community met last week to discuss the future of the historic Salem Church.

In order to revitalize the club, the group elected a slate of directors for the Cullasaja Community Club, and created new plans for the restoration and preservation of the church.

Erected in 1875, its role as a church ended in the mid-1970s. It was overseen by the Methodist Diocese of Lake Junaluska. An informal agreement allowed residents to hold community club meetings at Salem Church. The Diocese decided in 2010 that they were not able to invest in restoring the “abandoned” church and generously donated the Salem Church to the Cullasaja Community Club in 2010, when a desire to see the building preserved was expressed by Cullasaja residents.
As time went on, membership in the club declined and meetings were held less frequently and the church went unused. A number of unmet structural needs will most likely be a priority in the initial stages of the preservation project. 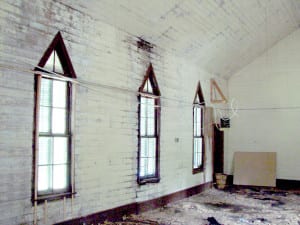 “We know we’ve got a big job ahead of us,” said Linda Bryson, who took the minutes at the meeting. “[The church] has got some leaks in the roof, floor trouble and critters in the walls, and we’ve got to get it finished out with water and septic. We’re thinking of putting together a group on Facebook for the community club. We’ve had a lot of people say they weren’t aware of all that was going on, and that they want to help. We will post meetings, work days, and do a lot of fundraising.”

During the meeting, there was hesitation when the floor was opened to nominations.
Bryson told everyone, “This is what support for the community means, you’ve got to help.”
After that, the officers were elected. There was a smile in her voice as she said, “I’ve got a list of names, I’ve got pictures (from the community meeting) of all those people who said they were going to help. I’ve got proof.”

Milles Gregory led the meeting. “I’m a resident of Cullasaja, born and raised here, about one and a half miles from old Salem Church. I’ve got a lot of memories about the old church. On Sunday afternoons, 15 or so of us boys, well, back then we had to make our own entertainment. We built wooden wagons and rode down the hill. I went to VBS [Vacation Bible School] there when I was a child. One of my relatives is buried there. I just want to see it preserved, improved, and fixed up. We’re going to plow new ground. I think with all the people working together it won’t be that much of a challenge.”
A cemetery above the church contains markers going back to the 1800s. Men from the community cleared off an adjoining field for gravesites to continue the tradition. Some of that land is owned by the Cullasaja Community Club. The history and family connections going back generations increase the importance of the property to the community. 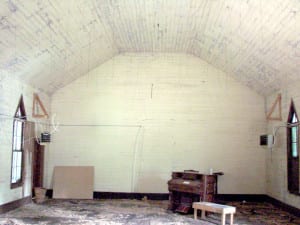 According to Ronnie Evans, his great-great-great grandfather, Washington Green Stanfield, was part of the original Board of Trustees that acquired the land in 1857.
“It’s on the Historical Register. It is regarded in the county as a historic landmark, being that the plans to build it were made before the Civil War.”
Dale Cobb helped to place the church on the National Historical Register.

“I know the organ in the church was donated by my great grandmother, Jane Bryson, she played there. It has a lot of history for the elderly in the community who went there at one time. I became kind of attached to it, and want to see it preserved as a memorial for the community.”
According to the documents filed with the National Historical Register, the building is a vernacular example of the Gothic Revival style, the oldest church in the county built in this style.
Steven Bryson has been the chairman for about a week and jumped into exploring the challenges ahead.

“I’ve got a few people I’ve got to talk to before the next meeting such as Alan Durden about the by-laws and his ideas.”

Durden, County Extension Services Director, supports the community clubs in Macon County.
“Milles Gregory told me that we could get Jerry Sutton, who used to be over the Clarks Chapel Community Club, that he’d be glad to come help with the by-laws and getting the new officers set up to run the organization. I’ve already talked to Ronnie Beale about funding options,” said Steven.
The foundation of the church consists of rock piers and wooden beam sills.
“A couple of beams need to be replaced. I have spoken with two guys in the community who have sawmills. They’ve offered to donate lumber to get the foundation done to where we don’t have to worry about it,” Bryson said.

Pointing out that he lives just beyond the church, he said, “It was overgrown … I went ahead and cleaned all that out because it was holding water and the place was going to rot. … Now we can proceed with getting it at least preserved if not back on its feet with meetings held there. Hopefully, we can have meetings. … We just have to preserve it. Somebody has to do it,” said Bryson.
The Cullasaja Community Club’s next meeting will be held at the Cullasaja Fire Department at 7 p.m., on Tuesday, March 1. Interested people willing to help are welcome.

Coffee with a Cop discussion ranges from curiosity to concern

Board approves contract for IVC transports