Working with the Franklin Garden Club has allowed David Watters to fulfill   two of his passions – gardening and tinkering with electronics. Watters has served as chaplain of 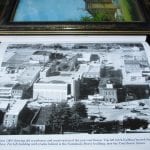 the club. He holds keys to the gate under the clock tower on the square where the club keeps their gardening supplies and to the clock room where official personnel ascend the stairs to start or stop the clock. Watters enjoyed the close proximity and accessibility to the clock and began to miss the whirring of the instrumentation and the chiming of the Carillon.

A Carillon is a musical instrument with at least 23 cast bronze bells that are shaped like cups. They can be played

one-at-a-time to produce a melody or played together to produce chords. Carillons are common in churches and municipal buildings and are typically kept in bell towers such as Franklin’s bell tower from the old courthouse.

“The garden club has taken care of Rankin Square and clock tower garden for decades, so I had some interest in the clock tower,” said Watters. “Well, it [the clock] had been off for about five years because it was disturbing some of the activities such as Pickin’ on the Square, so they just turned it off.”

Watters said about nine months ago he first approached the Town of Franklin but learned it was a county matter, so he spoke with County Manager Derek Rowland to share his thoughts and to offer assistance.

“The county manages clock tower garden and Rankin Square and of course it’s the garden club that keeps them pretty,” said Watters.  “It’s two different things taking care of the garden and the clock.”

With a background in electrical engineering and present experience with the Franklin Amateur Radio Club where he maintains the repeater – an electronic device used by ham radio operators that receives and retransmits weak signals at a higher power to cover longer distances – on Cowee Mountain, he felt if he played around with the clock he could get it going again on the hour and has made some progress.

“It’s operational, but it’s not on the hour,” said Watters. “It is ll:00 and 12:00. I would make it much more regular and controllable – not only on the hour but on a weekly schedule so it would not only not interfere with Pickin’ on the Square; but that you would get more music, for instance, on Sunday after church and all sorts of schedules. It is possible to do that, but right now it is just the bare minimum. The clock and the chimes are separate, independent systems. Hopefully they are synchronized. Nonetheless, every effort is being made to keep them together.”

According to Stacey Dickerson area manager of the Verdin Company in Cincinnati, Ohio, that originally installed the system in 1996, there are three components, the clock, the real bells and the chimes. “The real bells are often of most interest to folks in a historic context because they are actually hearing the bell when the clock strikes on the hour,” said Dickerson.

“I went up there, played around with it and got it going, being an electrical engineer with a degree from Georgia Tech,” said Watters. “When I was a youngster, I just loved electricity. I was in middle school building radios and tinkering with electronics. This was in Raleigh, N.C., where I grew up. It was just in my soul – just like some people have dancing and music and so on.”

“Electrical engineering was the toughest course on campus because it was so heavy on math and physics,” said Watters. “Engineering has heart and soul, and well, I have a vision of punching up Franklin to make it a showplace of Western North Carolina, particularly around Christmas time. I would like to put Christmas carols on the Carillon and even do it in such a way that we could have a sing-a-long. We have Christmas lights on our trees. I want to do it so that the lights dance to the music. But there are certain places where they have the lights spin and do all sorts of things in synchronizing with the CD in the clock tower.”

Watters is very fond of Franklin and wants to continue to invest in his community. He has roots in Franklin since his grandmother Ida Isabelle Cunningham grew up here, and his grandfather Edwin Vance McConnell lived in Clay County. He would travel to Franklin in a wagon to get materials for his store because the train did not come to Hayesville and there was no railroad. After the all-day trip, McConnell would stay in the Franklin homes of friends and relatives.

After serving in World War II stationed in England as a pilot from 1944 through 1946 and having accomplished historical missions such as flying over Branson, Germany and working for the Office of Strategic Services (now CIA), Watters returned to the United States. He specialized in research and development in radio frequency systems and optical systems. Now armed with his GI Bill, he attended Georgia Tech where he remembers having only one meal a day – a chili dog at the famous Varsity Restaurant in Atlanta.

Watters fared much better after graduating and entered the world of commerce. He worked for technical companies such as the National Aeronautics and Space Administration (NASA) and Goddard Space Center outside of Washington, D.C. before retiring first to Clay County to settle on the 55 acres given to him by his grandfather and then to Franklin. Although he’s traveled the country and the world, Watters says there is no disappointment here, and there’s no place like home.

“It’s a microcosm of America,” said Watters. “It’s just my desire to do something which is eleemosynary (a typical Watters vocabulary, meaning philanthropic).” It is my hope one day to get the thing [the clock] so thoroughly instrumented that people will want to go there to have their weddings. Of course they do that now, but they don’t take advantage of what’s in the tower. It is very underutilized. Can you imagine for a wedding having an organist or musical instrument digital interface (MIDI) keyboard playing soft music before and during the wedding; and then after ‘you may kiss the bride,’ that thing powers out [beautiful music].”

Watters has many visions and believes he can accomplish those working together with the community and the Verdin company. One of the most important items is acquiring an instrument so things run by remote control rather than having to climb into the tower. It would also make it easier for turning things on and off during town events.

Dickerson said the Verdin Company installed the original equipment in 1996 and performed upgrades and maintenance in 2012. Verdin upgraded the clock motors and the clock equipment, timepieces and controller that keep it on time. He looks forward to working with Watters to infuse more heart and soul into Franklin.

Macon County Historical Museum Curator Robert Shook shed light on the history of the clock tower that was originally part of the Macon County Courthouse.

“They built the first courthouse in 1830 and it stayed around until the late 1870’s until it burned. Then they built courthouse number two that was contracted by John B. Davis in 1881. [According to “Then and Now: 150 Year Pictorial History of Franklin, North Carolina” by The Macon County Historical Society, Inc., construction was completed in 1882.]  It stood and served Macon County until 1972, and then the present building took its place.”

Shook said records show the 1882 courthouse was a beautiful design of that period in contrast to the cold war inspired building of today.

“It was an auditorium and served for singings and whatever Franklin could come up with, and they had a lot of gospel singing and bluegrass music come through with pretty big names. They wanted to preserve something of the old courthouse and thought it was small enough and would stand out enough.”

The Historical Society publication also detailed the move to the present location where the Franklin Jaycees sponsored construction of the tower.

That music is part of the common thread that binds Watters to his vision for the clock tower and the increased revenue from an attraction that becomes a mainstay, increasing revenue and drawing more visitors to Franklin.

“I want to have the pleasure of having done something that is well done for the benefit of the community and to see citizens receive the joy of music and the pride of their little town.”

Wesley’s Park renovations ahead of schedule