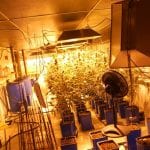 While last year saw record high opioid-related deaths, an increase in drug trafficking operations, and a commitment by the current administration to bolster the national Drug War effort—it seems 2018 is shaping up to be another eventful year for narcotics operations in Appalachia.

But the public’s support for the war on drugs appears to be waning in some respects, and is increasingly using social media to highlight that fact.

At the end of February, numerous law enforcement agencies at the local, state and federal levels conducted a successful raid on a suspected marijuana grow operation in Western North Carolina. It was all hands on deck, with Swain County Sheriff’s Deputies taking the lead. Assisting them were officers from Cherokee Indian Police Department, the Asheville office of U.S. Drug Enforcement Administration, and North Carolina State Bureau of Investigations.

Officers and agents executed a search warrant on a residence in the community of Brush Creek, where they located an extensive marijuana grow operation concealed within the location.

“A substantial number of marijuana plants were seized, along with multiple pounds of marijuana that had already been processed for sale,” said Sheriff Curtis Cochran on his office’s Facebook page. “Many law enforcement officers spent all day, and late into the night, working on safely dismantling this operation. After this investigation is complete, I anticipate the arrest of multiple suspects.”

While the post received nearly 200 “likes,” and well over 100 shares, the public’s comments were largely negative. Many seemed to find the bust arbitrary, highlighting the scourge of “harder” drugs like heroin and methamphetamine as a more fitting and ideal use of county resources.

“Good job on stopping people from growing plants instead of stopping amateur chemists from creating a substance that tears families apart,” read one comment.

“Wow, really? Weed? Because that’s what’s killing our young people,” read another. “Something that needs to be legalized versus what’s already legal. Weed treats diseases, while these pills and meth become one worse.”

“I do hope the people arrested don’t get put away for an excessive amount of time,” read another. “They weren’t putting anyone’s lives in danger.”

The online thread brimmed with discussion by locals for nearly two weeks after it was first posted, containing a wide range of comments.

Some suggested the seized pot be sold to states where it’s already legal, using the proceeds to feed both the county’s homeless and incarcerated residents. Several others called for the legalization of marijuana altogether. A few speculated that since it’s now an election year, the reason for the bust was due to the sheriff running again. On either side of the debate, most remarked the only way to settle the issue is by voting.

Details surrounding the Brush Creek investigation remain scarce, says Cochran, as the case is still under investigation. He did however indicate that the bust yielded somewhere between 50 and 100 pounds of marijuana. Asked whether operations like this were a regular occurrence in the area, Cochran remained guarded.

Despite the fierce response by local Facebookers, the Drug War’s lack of popularity made little difference to several local law enforcement officials, whose efforts earned them each an award a few weeks later.

The officers were awarded for their investigation into a mountain drug trafficking organization supplying heroin and methamphetamine. Cochran noted the drugs seized in the operation were destined for the Cherokee Indian Reservation.

“Great job by this group, and a huge thank you for your drug enforcement efforts in Indian Country,” said Cochran on the post. Unlike his announcement of the pot bust, the awards post generated nearly 20 “likes,” and no comments.

While public opinion deems some drugs as either “bad” or “good,” a lucrative market remains for all illegal drugs. Despite their degree of popularity, or the level of harm they pose to the public—the market doesn’t discriminate between the two, nor does the law.

In fact, both institutions seem to share some common ground. Those working on either side of the law seem to benefit from the market the law maintains through their prohibition.

Exactly one year before area investigators received awards for their efforts on tribal lands, many of them began their surveillance of Hart at his home on those very same lands.

Acting on the tip, they then conducted a series of controlled purchases at Hart’s home throughout the following month. With the help of their CI, investigators bought several bags of pot, as well as approximately 32 milligrams of Oxycodone.

As they continued surveillance, investigators also “noticed an unusually large amount of traffic in and out of his residence,” reads a fact-based document from the case.

On February 2, local and federal agencies executed a search warrant on the home, where they converged on Hart and his two children. Altogether, authorities seized a pound of marijuana packaged up into several smaller baggies, as well as a set of scales, paraphernalia, surveillance equipment, firearms and cash.

According to documents, Hart told them he’d been selling pot at $20 a gram to the vehicles they observed frequenting his property. Along with his daughter Michelle, Hart was charged with simple possession, drug paraphernalia, possession with intent to sell, maintaining a dwelling for drugs, and felony possession of firearms. The son was not charged.

Federal documents also state Hart’s son told authorities during the raid that his father hadn’t worked an actual job for around three years.

But just as drug money is a source of revenue for the outlaw, it also serves the same function for the law as well. Citing forfeiture laws, federal prosecutors are now attempting to seize not only Hart’s property, but the $19,769 confiscated from his home.

But just like laws outlawing marijuana, forfeiture laws have been widely condemned by defense attorneys and civil rights groups alike. In short, civil asset forfeiture laws allow police to seize the property of anyone they allege is involved in a crime. Those agencies may keep that property or sell it.

“Police abuse of civil asset forfeiture laws has shaken our nation’s conscience,” reads the American Civil Liberties Union (ACLU) webpage on forfeitures. “Owners need not ever be arrested or convicted of a crime for their cash, cars, or even real estate to be taken away permanently by the government.”

Forfeiture laws, according to ACLU, were originally designed to help police cripple major criminal outfits, like the mafia, by diverting their resources.

“But today, aided by deeply flawed federal and state laws, many police departments use forfeiture to benefit their bottom lines, making seizures motivated by profit rather than crime-fighting,” says the group.

The laws enabling law enforcement to seek civil asset forfeiture are as unpopular as some of the drug laws they thrive off of today.

A year before Hart’s case, the libertarian Cato Institute found in a poll that approximately 84 percent of Americans oppose the practice of forfeiture. According to a Pew Research Center survey, about 61 percent of the country said marijuana should be legal.

North Carolina residents were of similar mind in 2017. Elon University found in a poll that 80 percent of the state was in favor of medical marijuana, and just under 50 percent were in favor of its recreational use.

Despite the figures, or groups like the ACLU, neither the popularity of a drug or the law matters to law enforcement.

“Illegal drugs are illegal until the law changes,” said Cochran. “Until then, we’ve got a job to do.”

FHS teacher uses trip to DC in the classroom

Shortage of mast means bears out looking for food