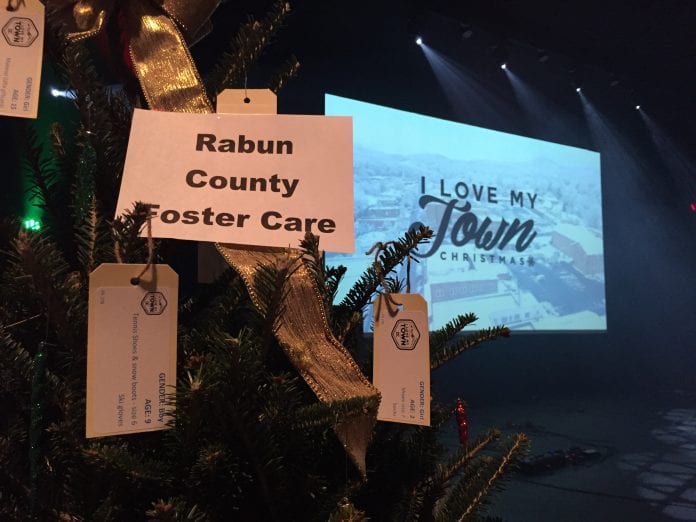 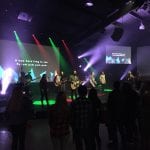 Red and green floor lighting swirled and flipped on a stage as a guitarist gently strummed the chords of Little Drummer Boy Sunday morning. Families from Macon, Rabun and Jackson counties stood in a semicircle on a concrete floor in the dark, surrounded by Christmas trees with paper ornaments. Their children could be heard softly singing along with the chorus: “Pa-rum pum pum pum.” Some congregants held up one arm in praise. Families hugged. Everyone was smiling.

“If this is your first time at ‘I Love My Town Christmas,’ let me tell you what it’s all about,” said Pastor Ben Windle of Discover Church, describing the church’s signature holiday gift program for needy children and their families. He rocked back and forth on the stage, dressed in jeans and sneakers. He had no lectern. No robes. He was funny, not boring. The 35-year-old spoke quickly, apt for an attention lacking, millennial generation of believers.

Reading from an iPad, he quoted the Bible’s Timothy 6:18, calling on his congregants “to be rich in good deeds and generous and willing to share.” He talked about the compassion of early Christians during the Roman period, how they had strengthened women’s rights and took in abandoned children. He completed the devotional in five minutes, as promised.

“We’re not doing this so that people will go, ‘Man, Discover Church is a great church,’” he said. “We’re doing this because Christ asked us to.”

The 10-year-old nondenominational church at the end of E. Main St. and Highway 441 averages about 700 congregants, among them 185 children, at a typical service. So talented and organized is the 30-strong “Worship Team” — including three keyboardists, three drummers, 15 singers, guitarists and bassists — that they even have their own music director and green room.

Windle admits he does not recognize everyone. For this reason, he encourages members of the church — or partners, as they are called — to organize and participate in “Life Groups” in their homes. Every week, sermon-based questions are e-mailed to groups of 12 people or less to consider and discuss. One group is led by Lazy Hiker master brewer Graham Norris, another by Outdoor 76 co-owner Cory McCall.

Windle’s own group includes about 20 Parker Meadows street hockey friends. Still others across three counties meet in private homes and focus on faith, parenting, marriage. There are groups for singles and couples, men and women. It helps fulfill the “bonding experience” that is hard to achieve in a large congregation setting, he explained.

“It’s helping me as a leader to lead people closer to Christ, and also it helps me strengthen my faith,” said Quashona Antoine, 26, Discover Church’s administrator and the leader of a women’s group. Antoine started attending Discover about two-and-half years ago and started working there full time a year ago. The Atlantic City, N.J.-native was raised Muslim and converted to Christianity while studying popular music at Catawba College in Salisbury. Antoine, who is black, believes Discover Church is a diverse place where anyone can fit in.

“I feel like it’s really diverse. The type of people who come, the ethnicity, just different backgrounds,” she said after turning in her gift donations for two infants in Rabun County, a boy and a girl. After an abbreviated service, eager congregants and their children crowded around Christmas trees to choose paper ornaments labeled with the gender, age and need of an underprivileged child or parent.

“I had 20 kids already filled before this even started,” she said of the I Love My Town Christmas event. Marshall estimates 500 to 600 gifts will be donated for area children this year. So organized is Discover Church’s gift-giving program that it is the only area church that the Macon County Department of Social Services partners with to provide gifts for foster children. Earlier this year, DSS even conducted a training to license parents for foster care and adoption in the church’s “Growth” room, while Discover provided childcare and food so that members – including Pastor Windle – could attend.

“It is really a huge time commitment, very complex to get everything arranged, and also there are no funds whatsoever that are available,” said DSS social worker Stacey Messer, who has worked with the church on Christmas gifts for three years.

When Huddle House called DSS to donate gifts for foster children this year, Messer referred the restaurant to Discover. The restaurant is now coordinating with the church to support six children. “They’re just an extremely supportive partner for our agency. I don’t know what we would do without them.”

Windle grew up homeschooled in what he describes as a separatist, fundamentalist home of Baptist influence in Indiana. He was called to the ministry at 15 and by 23 he was leading his own church in a former swinger’s club in Hollywood, Fla. He continued preaching in diverse communities in Pembroke Pines and North Miami until he was 30. Then he burned out.

His three children never saw their father. He contemplated leaving the ministry. Then he called a friend who was a pastor in Franklin. Soon, he relocated his family to serve as a resident planting pastor, training to open a new church.

“I have three kids and when I got here, they fell in love with the place – and so did I,” he said of his children, now ages 11, nine and five. When Life Church’s pastor left, Windle’s name was put in the hat for the job. He was selected. But within months, they had no place to worship.

“We were meeting at the Whistle Stop mall before it became Super Ingles, and we had to change our location in about four months, and we had no money in the bank,” he recalled when he learned his lease would not be renewed.

About 300 church partners raised $250,000 to buy the current property. Some parishioners sold their car to donate the proceeds. Today, Discover Church is housed in a 25,000 square-foot building with modern concrete and wood interior, $30,000 in sound and lighting stage equipment, three screens, a team of technicians, live Internet feeds of services, a “Mommy and Me” room with one-way mirror and video feed, multiple rooms for community meetings, office space for its four full-time and four part-time employees, three neat, clean, brightly colored children’s education rooms, a bouncy house and a barcode scanning system for parents to check in their children for a worry free service.

“As our town grows, our church is growing,” Windle said, counting on about 400 partners now plus hundreds more who attend. Windle estimates that about 80 percent are Florida transplants who have experience attending a similar church.

Discover will expand to a third service in February. Windle says he can easily see new campuses in Rabun and Jackson counties in the next few years. If not for the Bible verses and teachings from Jesus sprinkled into his matter-of-fact conversation, the bearded young pastor could easily pass for a hipster barista, minus any visible tattoos or piercings.

“To be brutally honest, there are some people who have been deeply wounded by buildings with a steeple on top,” he said, describing what he called church anxiety. “Our target is not angry church people; our target is simply the unchurched.”

Projected behind him on a screen under the name Discover Church during his opening prayer was the message “You belong here.” He explained: “I think people come here looking for a cause, looking to be mobilized.”

Reaching a young and diverse community

Windle admits it’s not easy to create a comfortable place for a diverse community or reach young people uncertain about their faith. So, he recently hired a full-time youth pastor, Sam Vargas, who is Hispanic and coaches soccer at Franklin High School. Windle actively spotlights the church’s diversity inwardly in his messaging and on stage, and projects it outwardly in promotional videos.

“People show up and say, ‘Oh, this is where everybody is. I’ve heard that there are people like me here but I’ve never seen it,’” he said. “We’ve got Methodists, Presbyterians, Baptists, and we are reaching people from all sorts of socioeconomic backgrounds – people who live in trailers and people who own helicopters and jets, and they’re all meeting in one place.”

Already praised for its kids’ program, Windle wants to do more to reach children at critical ages. A special group caters to 4th to 6th graders.

“When you get to middle school, kids are going, ‘You know God’s not real.’ And they’re going, ‘What?’” The group’s curriculum tracks the teachings of their parents and will carry them through the entire Bible in three years. On Sunday nights, about 20 7-12th graders meet, and the Rabun Gap boarding school sends a bus full of students to the church. “They fill the first two rows,” he said.

On Monday nights, the church offers “Celebrate Recovery,” a program to help recovering addicts, whether church members or not. Additionally, three professional counselors offer free assistance to church members suffering from anything from suicidal thoughts to people pleasing. “In here, it’s okay not to be okay,” he says.

This year Discover built a church in Honduras; it has another mission in El Salvador; and each year a mission team works in Haiti, where Windle, a Creole language speaker, has spent time.

Discover Church’s yearly income is $615,000. Discover has operating funds in the bank for about 13 weeks, which is five weeks beyond what a church of its size should have, Windle said. He’s been criticized for not keeping more, and for not raising and buying the million-dollar property outright, instead carrying a mortgage.

After operating expenses and salaries – he earns $49,000 in addition to his housing allowance – the church gave away 40 percent of its budget to charity last year. Tens of thousands of dollars were donated to local charities like CareNet, its foreign missions, and ad hoc help to widows in need of home repairs, families short on their power bills, and programs like the yearly backpack giveaway to schoolchildren.

“It is not just an event, it’s a culture,” Windle said of the concept of I Love My Town, which he learned while on a sabbatical to study ministry work in inner cities. “We’re trying to develop a culture of people who love their town.” Antoine agrees.

“Discover is just helping people to be more selfless, so serving other people rather than thinking about themselves, and just building community.”

Windle thinks Discover is part of a fresh, fun vision of what Franklin is.

“I think there are a lot of people who maybe grew up in Franklin who spent their entire lives waiting for the day that they could get out.”

Back on the stage after two songs, Windle covered Christianity’s compassion, mercy and benevolence to strangers before ending with a brief prayer and message:

“If you’re here today and you want to shop, and you are wondering how you can do that, you weren’t expecting this, I have some cash on me,” he said of congregant donations intended for holiday gifts. Several families took him up.

“With that being said, get an ornament. Let’s do this thing!”