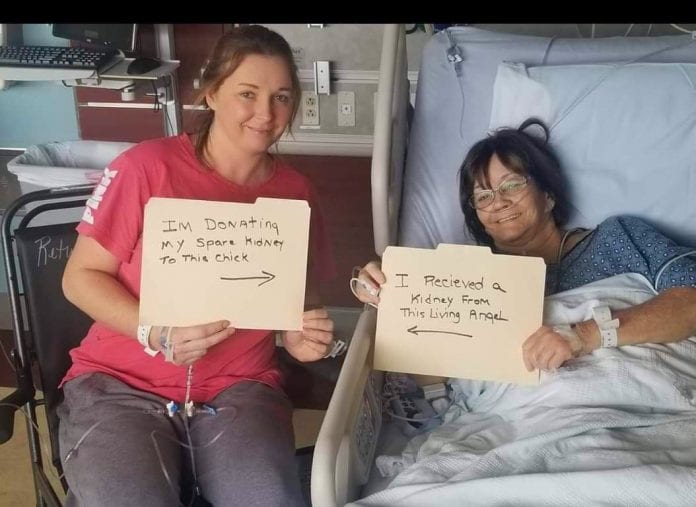 After months of road trips to and from North Carolina Medical Center in Chapel Hill, a four-and-a-half hour drive from Franklin, all the pre-operative testing and medical checks were behind kidney donor Sheila Pitts and recipient Pat Cable when they underwent transplant surgery Dec. 11. The two women, strangers until Pitts volunteered to donate an organ to Cable, recovered in adjoining hospital rooms.

Even though both women were well informed prior to the surgery, Pitts said post-op was more grueling than she expected. “I was in a lot of pain the first few days.” Yet, after four days, she was out of the hospital and staying in the nearby State Employees Credit Union (SECU) home offered for recovering patients and their families. She was quickly off pain medication and returned home to Franklin a week earlier than expected. By the first week of the New Year, Pitts was back at work cleaning office buildings.

“As far as the healing goes, everything is good,” said Pitts. “I had a post-op on Dec. 20 and everything was fine. I just don’t have all my energy back yet.”

Cable remained in the hospital and in Chapel Hill longer than Pitts. After being released from the hospital to the SECU house, Cable experienced some blood pressure and dehydration issues.

“It was really hard to eat or drink anything afterwards,” said Pitts. “I had to force myself. The same with Pat. It was rough.”

Cable explained that the anti-rejection medicine has many potential side effects. “And I’m experiencing some of them,” she said, adding that her appetite is still not back to normal.

Pitts and Cable were able to enjoy Christmas at their homes in Franklin. Cable is still recovering and will be for at least a few more months.

Though unknown to each other this time last year, the two women are now friends – and forever bonded through a shared organ transplant. Pitts said that as soon as Cable is well enough, the two families have planned a day to celebrate in Pigeon Forge, Tenn.

“Both Pat and her husband, Steven, are so sweet. I haven’t seen her since we got back to Franklin because she has to stay home and away from germs. But we check up on each other.”

Both women will continue to undergo periodic checkups to make sure their one kidney is functioning properly.

“I’m glad it’s all over,” said Pitts. “It was exhausting, especially driving back and forth … and leaving a few days early for the surgery we got caught in that snowstorm, so that was stressful. But it was all worth it. I have no regrets at all.”

Cable said she will be forever grateful for the sacrifice Pitts made for her. “My kidney is working at 100 percent and I’m starting to feel better each day, and I thank Sheila every single day for saving my life because the doctor did say I did not have much time. I had a lot of poison in my body because my kidney function was so low.”

Both agree that organ donation is a serious consideration. “It’s important to really study up on it and be prepared,” said Pitts.

Cable welcomes people to contact her. “I’ve already met a woman in Franklin who discussed with me that she may decide to go ahead and be tested as a donor for someone.”

Planning Board approves special use permit for new replacement...