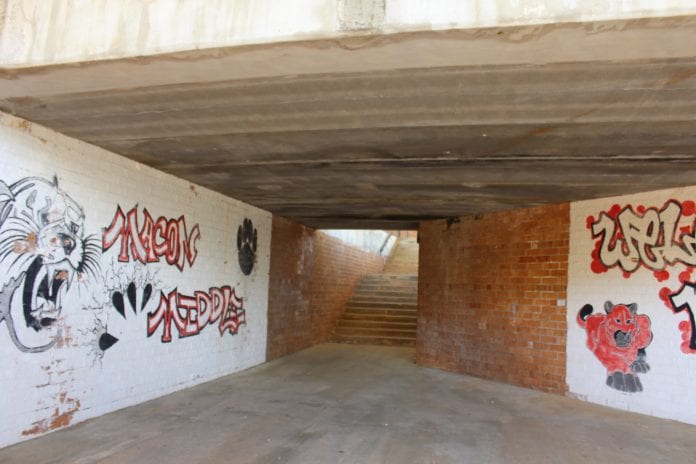 The traffic pattern at Macon Middle School may soon return to normal. MMS Principal Scot Maslin brought the status of the deteriorating bridge in front of the school to district leaders last fall, with concerns of the structure’s reliability.

“Mr. Maslin began reporting his concerns with regard to the apparent deterioration of the concrete in the bridge structure last fall,” said Macon County Superintendent Dr. Chris Baldwin.”Initially, he noticed that the concrete appeared to be crumbling.  Then this spring a larger piece of concrete actually fell from the ceiling.”

Maslin originally presented the issue as a possible capital outlay project for the coming school year’s budget planning, but because school buses use the bridge, school leaders contacted the Department of Transportation to see if the bridge and the stretch of road would be covered under the requirement that the state must maintain roads utilized by school buses.

Macon County Schools received confirmation from the state that the bridge would fall under the state requirement that the DOT should be responsible for the upkeep of the structure, shifting the financial obligation for the road to the state rather than the district.

“The DOT has assigned the bridge a number and they will be monitoring the bridge from this point forward,” explained Dr. Baldwin. “They have the specifications for the bridge and are working on assigning it a weight limit before we can open it to bus or truck traffic.”

While the bridge was originally closed to all traffic, the DOT did approve the structure for car traffic, and soon may approve it for bus traffic while devising a repair plan to address the deterioration.

“To my knowledge, the bridge has never been repaired since it was constructed back in the late ’70s,” said Dr. Baldwin. “We appreciate parent and student patience as we work on improving the safety of this bridge.”

State approves funds to raise bus driver pay across the board