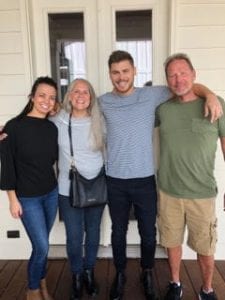 Christian worship leader and musician Cory Asbury who spent most of his formative years in Franklin, is now a  household name in America after winning three GMA (Gospel Music Association) Dove Awards. And household is a key word in more ways than one. According to his mother, Janet Asbury, his upbringing in a Christian, musical household laid a foundation for his success today. 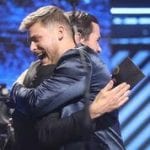 When the 49th Annual GMA Dove Awards were broadcast on television on Oct. 21, many people were transfixed while waiting to see their favorite artists, but not  Asbury. She had already had her exuberant experience front and center at the Nashville, Tenn., ceremony on Oct. 16, 2018 – leaping from her seat, shedding tears of joy, screeching like a schoolgirl at her favorite concert and letting go of a big “Woo Hoo!” for her son. 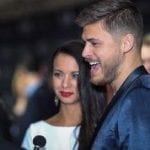 “I was so excited because he was the first award called and there were 13 nominations,” said Asbury who is an intercessory pray-er. “I started screaming and jumping and the next song performed and the kindness of God just overwhelmed me. I just couldn’t stop. It just blew me away. It had me crying and I couldn’t stop crying after that.”

This was her family’s moment – husband Robert “Skip” Asbury, daughter Hannah, Cory’s wife Anna and their three children. All did not attend, but their love and support were felt by Cory as his name was called, once, twice . . . and finally a third time. His parents were so grateful because friends, Theresa and Kip Amundrud who were with them, had sponsored their trip.

At the end, Cory had garnered three Dove awards. The pinnacle ceremony that recognizes musicians and other talent within the Christian/Gospel music industry had taken note time and again for his chart-topping single and the album “Reckless Love. ” Cory has a passion for his audience and says, “God loves you. Even more than that, He likes you. He created you for a purpose and He takes delight in you right where you are. Your imperfections don’t scare him. Your sin doesn’t intimidate Him. He paid for you with His very own blood.”

The industry was not surprised by the recognition of an artist whose lyrics had reached millions (including 62 million hits on YouTube) and whose songs had been resounding for years on the airwaves, at churches and events internationally.

“Oh, the overwhelming, never-ending, reckless love of God / Oh, it chases me down, fights ‘til I’m found, leaves the ninety-nine / I couldn’t earn it, and I don’t deserve it, still, You give Yourself away / O, the overwhelming, never-ending, reckless love of God . . .” The song released by Bethel Music in 2018 has become a praise and worship team classic. By the end of the evening, Cory had won Song of the Year, Worship Song of the Year, and Worship Album of the Year.

Overwhelmed is the feeling expressed by Asbury shortly after leaving Florida and moving to the mountains of North Carolina. She recalled a conversation with God.

“When we lived in Franklin, I can remember going out on my balcony and asking God ‘Who is this kid and who have you given me?’ When he was born, I returned to the Lord. When he was born, I went before a church and rededicated my life. At home, we tried to set the example through whole-hearted David-type worship, and I loved reading a book on Proverbs, “The Verbs” to the children.”

Cory attended Christian school up until elementary school, and before the family moved to Franklin from Lighthouse Point, Fla., Cory was home schooled. Asbury did a study unit on the ear, then sound, and eventually amplified music. This piqued both their interest, so she and Cory went to a pawnshop to purchase a guitar and a book of guitar chords. They began to study together, but Cory soon excelled and taught a neighbor how to play when he was only 11 years old. The family’s record store also provided incentive for Cory who eventually bartered with his family so he could work and contribute towards an expensive guitar he found for $1,200.  By the time Cory had his second guitar, the Asburys knew he was gifted, by his singing, writing and playing the drums. His sister, Hannah began as a singer since she was little but chose a different path.

Cory was also a “normal” kid, participating in sports and enjoying his time at Franklin High School. He began leading worship as a teenager at Franklin Covenant Church under John Makinson who really sowed into his life. Makinson let the youth lead worship one Sunday, and that was a great catalyst for Cory. In addition, his father Skip took over the youth group for a year and was influential with his singing, and drumming. There have been many mentors over the years, but his father, Makinson, and Anna Becker, a great singer/songwriter, laid a great foundation by pulling him into the worship team. Asbury has shared publicly that music has impacted him profoundly from childhood and developed his songwriting ability growing up in North Carolina.

He always loved horses and thought he would attend the University of North Carolina to be a veterinarian. According to Asbury, Cory was still immature in the Lord and she knew differently about his future, but didn’t want to discourage him. Fortunately, he attended a Fire and Light Internship led by Johnny Becker and Ann Shefland who recognized his talents and gifts. He was going to be a veterinarian, but a lady from the church asked Asbury’s permission to speak to her son. She told him she felt what God had for him he didn’t have to go to college for.

“We didn’t even know that he didn’t       really want to go to college,” said Asbury. “My prayer had been, ‘Lord help me discover their gifts and talents and train them in the way that you have called them to go. We are ultimately not to force them. If we send them to college and steer them, they may be miserable.”

There was often rollicking humor in the Asbury home and Skip was the leader and it rubbed off on Cory. When he was home schooled, he used to write poems, and stories with characters he illustrated. One character he wrote about was named “Margaruzanatiotatolazoneliacdaracdot” The Alien. Asbury jokes that this creativity may have spurned his songwriting.

After graduating from Franklin High School in 2004, Cory followed his heart and the persuasion of his friends to begin an internship with International House of Prayer in Kansas City, Mo. (IHOPKC). He presently serves as a worship pastor at Radiant Church in Kalamazoo, Mich., and is a member of the Bethel Music collective. Cory and his wife Anna have three children. Cory has emulated his family’s love and worship of God and his passion for others while maintaining his great sense of humor. In addition to his GMA Dove Awards, Cory has also won K-Love Fan Awards’ Breakout Single of the Year and Worship Song of the Year for 2018.

“Our dreams are too big and they scare us,” said Asbury. “We don’t go after them because we say ‘ah, I can’t do that.’ We don’t pursue them, because it can’t possibly be. It’s too good to be true. Parents need to encourage their children to go after their dreams and to believe that they can do it. Belief is everything. Teach your children to ‘believe your dreams and the God of your dreams.’

“I asked God for singers, writers and musicians that would bring Heaven down, pour out the Father’s heart to the world. Then He did it through my son, among others!”

Pressley steps down as chair of TDA