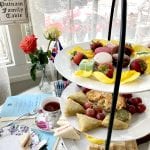 When the British Masterpiece Theatre series Downton Abbey debuted to Americans January 9, 2011, it did not take long for “Yanks” to become hooked. Fifty-two episodes later, and a global viewership exceeding 100 million, Downton Abbey, the movie, showed for a few weeks in September at Ruby Cinemas – as well all over the United States. However, the hype, soirees, and authentic tea parties continue.

In fact, throughout the United States, Americans are donning hats – and even authentic period clothing – to participate in true tea-time experiences.

Kathryn Sellers, a costume seamstress in Franklin, said a cloche hat, white or cream gloves, Mary Jane shoes, and a 1920s drop-waist-style dress are all appropriate for a Downton Abbey tea. If invited to a tea, “Find a pair of gloves, online or in a relative’s things, and practice wearing them before the tea,” she advised.

Even though authentic early 20th century dress is encouraged, Jan Lantrip, who owns with her husband, Tim, The English Tea Room & Eatery in Covington, La., said anyone is welcome to a traditional tea in any attire.

“It’s just that to truly become transported to another time and place for a few hours, a costume enhances that experience,” said Lantrip. “It’s a sensory experience with the finest china, fresh flowers, starched linens, and true British-style foods.”

The English Tea Room & Eatery is just one spot in the United States hosting traditional teas to celebrate the Downton Abbey movie – or enjoy true tea time anytime. Destinationtea.com lists places to “take tea.” Yet, anyone can host their own tea party by purchasing new or antique teacups, saucers, and tea, and making some traditional tea party foods, such as scones, muffins, sandwiches, and chocolate-dipped strawberries.

Biltmore Estate offers individuals an opportunity to experience tea time at The Inn on Biltmore Estate. A sampling of fine cheeses, sweet and savory canapés, and Newby Teas are served.

Some tea rooms, such as Lantrip’s, offer etiquette classes, but there are also traditional tea time instructions on such sites as Twinings. Or, Lantrip suggested viewing Downton Abbey episodes and paying close attention to how the characters “take tea.”

She added, however, “People attending teas will enjoy the elegance, relaxation, and respectability, regardless if they are prepared and in costume. It’s about enjoying a new experience.”

In celebration and recognition of the Downton Abbey movie, Biltmore Estate’s newest exhibition – opening November 8, 2019 and running through April 7, 2020 – features interactive elements involving the show’s characters, as well as fashions, locations, and historic events of the time period. Downton Abbey The Exhibition at Biltmore will be showcased in two estate locations and presents the similarities of the fictional Crawley family with the way the Vanderbilt family lived in the early 20th century.