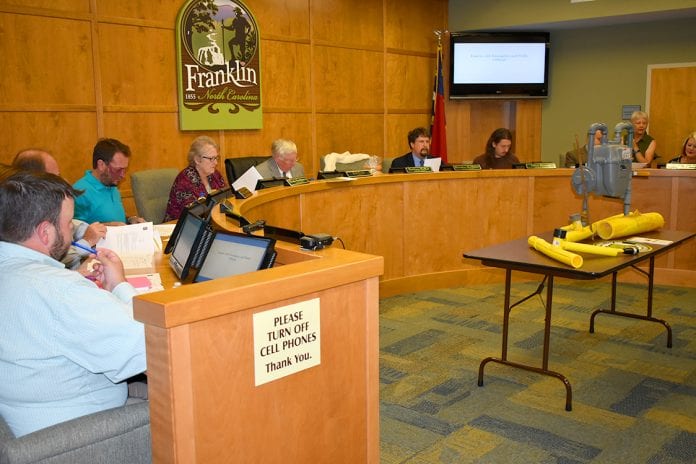 The Franklin Town Council met for its monthly meeting on Oct. 1, to address several items of new business.

A public hearing was held and several local merchants, voiced concerns about the possibility of parallel parking being allowed on the south side of Main Street. Last March, Franklin’s town board approved an alternate parking scheme on Main Street. It was to be a 90-day trial period, keeping the downtown area angled parking on the south side of Main Street, and allowing parallel parking on the north side. The concern was that the town might now implement parallel parking on the south side of the street as well, which had been discussed in a previous Town Council meeting.  Among the many issues of concern was the problem of parking for senior citizens. Several business owners spoke about the high number of seniors that cannot parallel park, let alone parallel park on the left side of the road. They also spoke about the dangers of trying to back up in order to pull into a parking place while traffic is flying by.  Shop owners are worried about losing business if parallel parking is allowed on the south side of Main Street.  They stated that many potential customers will not patronize their stores if parking becomes too much of a problem. They will simply go elsewhere to shop. There were concerns also regarding the construction of the three roundabouts being built on 441 Business.  While the bridge on Main Street was under construction, many businesses said they lost revenue due to poor signage. One shop owner went out of business due to the confusing verbiage on the signs. It was stated that in Candler there were rows of empty businesses, due to construction and poor signage, and shop owners are afraid the same thing will happen in Franklin. Business owners want clear and less confusing signs displayed, designating alternate routes of travel during construction of the roundabouts in order to direct prospective patrons toward downtown area businesses.

David Culpepper spoke about the town’s “bulb-outs” as being a feature which extends extra space to the side of parking spots. He feels that this would insure safety when parallel parking on the south side of the road. He also spoke about the dangers of backing out of a stall parking place, where there is no visibility to see oncoming cars. He added that being able to have a clear view of the businesses and oncoming traffic are important points to consider when planning the implementation of a parking ordinance.  The Council was amenable to taking these business owner’s points into consideration and will re-look at the proposal before implementing a new parking plan.

A presentation was given by Rick Norton of Chapter 994 of the Vietnam Veterans of America regarding PTSD (post traumatic stress disorder.) He explained that there is an alternative to treating PTSD with drugs. The alternative treatment solution involves the patient who is suffering with PTSD to write their story in the form of a narrative or poem and then reading it. This program has been presented at Camp Lejeune and in Asheville. The North Carolina Arts Council is currently sponsoring the program and has published the stories and poems in a book called “Brothers Like These.”  A local reading will be held on Saturday, Oct. 27, at 6 p.m., at Franklin High School in the Fine Arts Building. The Vietnam Veterans Association Chapter 994, VFW Post 7339 and American Legion Post 108 are also co sponsors.

Norton pointed out that this program is not categorically for Vietnam Vets but, it is for all wars and people, who have suffered from domestic violence, tragic loss of a loved one or any other traumatic experience that a person has endured. He said that “hopefully we can open some doors that will give people the opportunities to get some healing and some relief from PTSD.

“There is nothing wrong with having PTSD, what is wrong is having it and not getting treatment for it,” said Norton.  He asked the council to pass a resolution to raise awareness in the hope that people suffering from this disorder could come forward and get treatment.

A resolution was passed by the Town Council to proclaim Oct. 27, 2018, as Post Traumatic Stress Disorder Awareness Day.

Rance Fleming, from Toccoa Gas, gave a presentation on safety regarding gas leak emergencies. He laid out a plan of action should there ever be a gas leak in town. He spoke about the differences between certain gasses being extremely flammable and those that dissipate within seconds. His concern was with methane gas which lingers and can explode even after the gas has been contained. He assured the council that his plan was solid and they would respond swiftly if there was ever the need to do so.  He also stated that the fire department has been fully trained on how to handle gas leakage emergencies should it ever occur.

Council member Barbara McRae gave a short presentation regarding the Woman’s History Trail Plaques. The plaques are set to be unveiled on Saturday, Oct. 27, with docents available to guide people and answer questions regarding the historical contribution of each honoree.

McRaie also presented a picture of a mock up that sculptor Wesley Wofford had done of the proposed statue as part of the Women’s History Trail (WHT.) The statue will be seven feet tall, done in bronze and represents three women who played a prominent role in the history of Macon County – Timoxena Siler Sloan, Sally (last name unknown) and Rebecca Morris, a Cherokee woman, a black woman and a white woman. The artist says it may take up to two years to complete the sculpture.

The town council had previously scheduled a public hearing to discuss an undisclosed economic development known as “Project Wayah.” The council opted to postpone that hearing until the November meeting.