“I am so proud of our team and our season,” said FHS volleyball senior Canaan Drake. “Being named co-champions is amazing! I think it shows our perseverance and hard work despite our circumstances.”

Drake has been an FHS standout since first joining the team. This year, she was named Volleyball Offensive Player of the year for the Mountain Six Athletic Conference.

“I was honestly quite surprised when my coach told me I was named Offensive Player of the Year,” said Drake. “There are so many phenomenal athletes in the conference and especially on our team. Aside from the shock I was thrilled! I am forever grateful the coaches chose me, and I won’t forget the moment when I found out.” 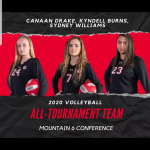 Drake finished the season ranked #1 overall in hitting percentage in the entire conference, which competes about teams from Hendersonville, Pisgah, Smoky Mountain, Brevard, and East Henderson. She was #2 for blocks, 4th for kills, 8th for aces and 15th overall for assists. She was named to the Mountain Six All Conference selection as well as All Tournament selection.

Despite a successful season, Drake said her most memorable moment from the past season was when she realized the team would be able to compete at all amid COVID19.

“The most exciting moment of the season was truthfully when I realized it would actually happen — that I would be able to be with my teammates in the locker room before games, play our rivals, and play in the conference tournament again,” said Drake. “I am so grateful for everyone who allowed this year to happen.”

The pandemic presented some unique challenges for players on and off the court that Drake said took some adjustments.

“COVID-19 definitely made this year challenging,” said Drake. “Even after adapting to the masks, we had other protocols to follow. Our season was essentially cut in half and we jumped right into conference games. In addition, the 25 fan limit did not provide the usual dread of the Panther Den from 44% other teams. There were plenty of obstacles we, as a team, had to overcome.”

After graduating later this year, Drake will head to Bryan College, in Dayton Tenn., where she has committed to play volleyball.

“I wasn’t sure until I toured Bryan’s campus and got to practice with the team that BC was where I wanted to go,” said Drake. “I absolutely loved the atmosphere, the players, and the coaching staff. And throughout this season my love for volleyball has grown greatly. When I officially made the decision I felt so much peace and excitement, I knew it was the right choice.”

Bryan College is extra special for Drake, as it is her parents’ – Sarah Dills and Josh Drake – Alma Mater.

“I couldn’t be more proud of Canaan,” said Dills. “I always tell her that I want to be like her when I grow up!  I started noticing this year that she would be the first off the bench cheering for a fellow teammate and even as a senior she was quick to grab water bottles for whoever was in the game, cleaning up the bench after a game, those are the things that touched me.  I loved her servant’s heart.  Her awards are amazing and I can’t show them off enough but we both know that in the long run those things will fade and I’m so proud of who she is on the court and off. I have so many emotions about her going away to school but it’s a school that I love. I feel like it’s a safe place for her to grow – her athletics and spiritually.  I had the best times of my life there and my roommates are still Canaan’s unofficial aunts. I pray she makes those connections, feels the bond of a new team, and just continues to grow into the amazing young woman she is already becoming.”

Drake plans to major in education while attending college.

“I have already begun studying elementary education through dual-enrollment,” said Drake. “Since I was little, I have wanted to teach, so I am thrilled to get started on that journey.”

Drake’s father, Josh Drake, is equally as proud of her, and is looking forward to watching the Bryan College Lions play next season.

“I’m very proud of Canaan. She has worked so hard over the past six years and I’m very happy for her getting Player of the Year,” said Josh Drake. “I’m also looking forward to getting to continue to watch her play at Bryan.”

Drake won’t be the only FHS alum on the Lions’ roster — FHS graduate Alison Knop was a freshman on the 2020 roster at Bryan College and will soon once again be Drake’s teammate.

Drake said the road to victory was a team effort, which is evident by the individual accomplishments of her teammates.

Drake’s teammate Taylor Ensley was named #1 overall in the conference in Kills and #2 in hitting percentage. She ranked 16th for blocks and finished the season out as a four year varsity starter and a member of the Mountain Six All Conference Selection.

Senior Rylee Corbin was not only ranked #1 in the conference in assists, but she also ranked #7 in the entire state. She ranked #2 in digs, #3 in aces and 16th overall in hitting percentages, finishing the season with an All Conference Selection.

Junior Sydney Williams was also named to the All Conference Selection and All Tournament Selection for the Mountain Six conference and ranked #7 in kills, #8 in hitting percentage and #18 overall in blocks.

Williams and Drake also play on the varsity basketball team which as of Wednesday had a record of 5-0.