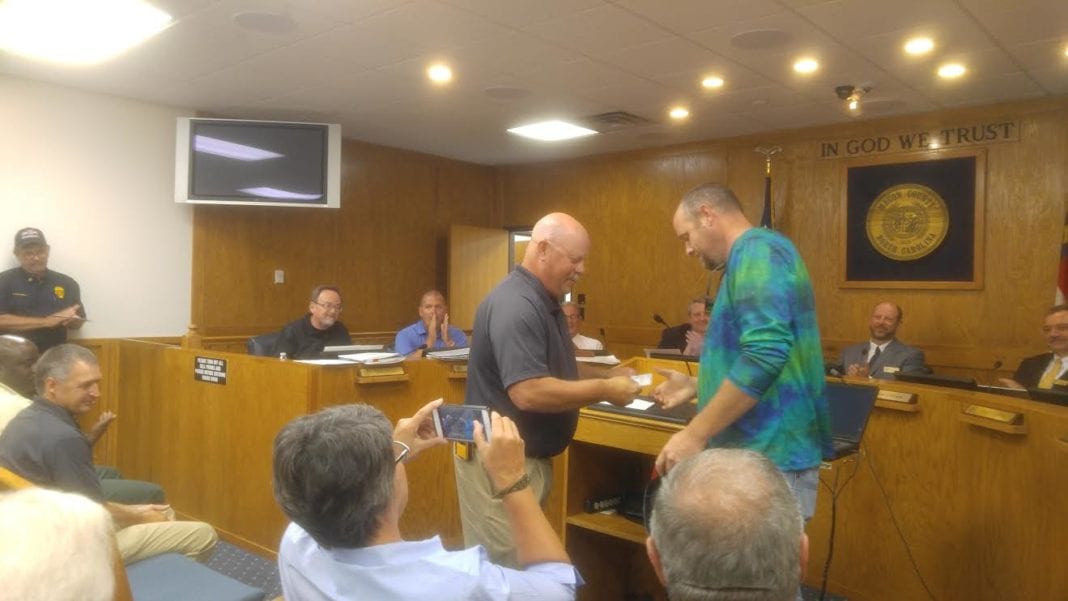 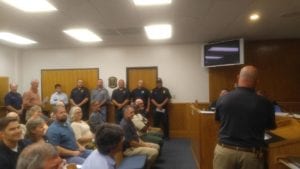 When fires spread throughout the national forests in Macon County last fall, hundreds of firefighters from across the country descended on Western North Carolina to battle the blazes. Fighting right alongside the paid career firefighters were local volunteer departments from Macon County. The fires were draining on local department’s budgets, something Duke Energy recognized and wanted to help with.

On Tuesday night, Andy Webster, president of the Western North Carolina Association of 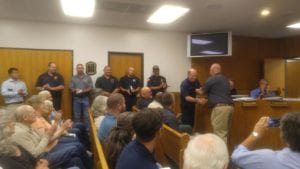 Fire Fighters (WNCAFF) and chief of Cool Springs VFD in Statesville, N.C., along with Lisa Leatherman with Duke Energy, presented checks to six Macon County fire departments and one department from Swain County in recognition of their efforts last fall.

“Last year, the State of North Carolina was challenged by two historic events, Hurricane Matthew impacting the Eastern part of the state, and forest fires impacting the foothills and mountains,” said  Leatherman. “WNC had never faced forest fires on the scale that we did starting last October. Resources from across our nation were utilized to manage and contain fires on public and private lands. Local volunteer fire fighters and departments worked tirelessly to protect personal properties of their friends and neighbors. Duke Energy saw a need to support the many fire fighters and fire departments who protected and saved numerous homes in our service area.” 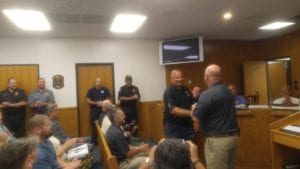 Departments who helped to battle the blazes that consumed forest lands in WNC were invited to apply for a portion of a $75,000 grant established by Duke Energy. The application process was managed by the WNCAFF. Many private individuals and organizations also donated to the fund which reached more than $84,000.

The funding was intended to help those departments who spent individual budget funds to fight fire, feed mutual aid departments, run 24/7 ICPs and used way more than normal amounts of fuel, food and supplies.  It can be used to replace lost or damaged equipment if insurance has been filed and there are uninsured balances left.

Leatherman noted that the funds available were intended to fill a void for local departments who didn’t have anywhere else to turn for additional dollars after exhausting budgets fighting the wildfires.

“We are proud to partner with the WNC Association of Firefighters who oversaw the application process for disbursement of funds to fire departments who responded to the wildfires,” said Leatherman. “The grant is for items that were not eligible for local, state, and federal reimbursement. Tonight it is a pleasure to see a portion of Duke Energy Foundations $75,000 grant being utilized by fire departments in Macon County. I can’t thank Macon County Emergency Management and Warren Cabe and all the fire departments enough for their service and the work they do to protect and serve the citizens of Macon County.”