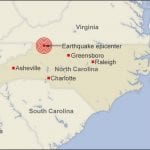 Sunday morning’s earthquake was one for the history books, as the USGS reported that it was the strongest earthquake on record for North Carolina in 107 years with the last one occurring in 1916.

Residents from Macon County and all throughout North Carolina reported feeling tremors from the earthquake with dishes rattling in cupboards and objects falling from shelves. From the hundreds of reports being made to the USGS, the quake was also felt in much of South Carolina, Virginia, eastern Kentucky and Tennessee, southern West Virginia, and northern Georgia. People reported feeling a light shake even as far as Maryland and Washington D.C., mainly from the upper floors of tall buildings where the shaking motion is more apparent.

The quake being very shallow at 3.7 km depth, it was clearly and in parts strongly felt in an area of 15-20 miles around the epicenter but as light to moderate shaking in all of North Carolina as well as areas of the surrounding states.

Residents in Sparta got the brunt of the damage, with a power outage being reported that affected parts of the small 1,800 population town. Broken glass, cracks in walls and ceilings, objects falling from shelves, and collapsed chimneys were reported from the quake. The USGS also shared photos from roads in Sparta cracked to the foundation in several areas.

As expected, at least five smaller earthquakes, known as aftershock, have been reported in the nearby area since Sunday’s 5.1 magnitude earthquake near Sparta.

Three of these earthquakes were reported Monday morning. According to the USGS forecast, over the next week, there is a 1 % chance of one or more aftershocks that are larger than magnitude 5.1. It is likely that there will be smaller earthquakes over the next week, with 0 to 4 magnitude, 3 or higher aftershocks. Magnitude 3 and above are large enough to be felt near the epicenter. The number of aftershocks will drop off over time, but a large aftershock can increase the numbers again, temporarily.

Earthquakes reported since Sunday include:

2.0 magnitude earthquake at 2:05 a.m. Monday, about three miles from Sparta.

2.2 magnitude earthquake at 4:43 a.m. Monday, about three miles from Sparta.