There is a saying that rules are meant to be broken. Another that states that there are exceptions to everything.  These thoughts can easily can be applied to plants.   From your own experiences think of other examples as you read though these random thoughts.

Not all berries are red.  Fred Galley was the chief horticulturist at Callaway Gardens in Georgia.  He put this garden on the map.  He was obsessed with plants that had yellow berries.  His best find was a cultivar of a Chinese Holly, Ilex cornuta.  One year a residential gardener called him to say that her holly had one branch with yellow fruit.   Fred made cuttings from that branch and introduced it as ‘D’Dor’ Holly.  It is a beauty. I was just plain lucky to have found a few rooted cuttings and grew them in Kennesaw.  Unfortunately, it is not hardy here in Franklin.   There are just a couple other yellow fruiting holly. Other plants have berries that come in red, orange, purple, blue and black.  Our native Pagoda Dogwood has black fruit for example.

Not all tree bark is brown.  There are many Japanese Maples that have red, or yellow, red or green bark.  There are Birch trees with white bark.There are fruit trees (Prunus) with tissue paper thin bark.  Some trees have bark so thin it exfoliates liver River Birch.

Not all leaves are green.  There are multiple examples of Japanese Maples with yellow, red, orange and leaf variation.  There are maples whose leaves have three color changes in one season.  An example of yellow leaves through the growing season is a small tree called Corylopsis or Winterhazel.

Some plants only bloom in the second year of growth then die.  I always think of Parsley that has this growth pattern. These plants are called biennials.   Some bamboo bloom every 100 years, produces seeds then dies.   American Columbo a wildflower occasionally found here that blooms occasionally once every 20 years then it disappears.

Most plants treated as annuals here are perennials somewhere else.  Geraniums and Lantana are good examples.

Not all plants have a fragrance and not all plant fragrances are pleasant.  There is a Hellebore with the species name foetidus.  There is a plant curiosity called Skunk Cabbage and a large Arum called the Corpus Lilly.

Most native plants have something that controls them so they do not become rampant. Native Dutchman’s Pipevine has a Swallowtail butterfly called Pipe Vine whose caterpillars feed on Pipevine leaves exclusively.  When we have imported plants from other regions they did not come with their controllers.  So, plants like Kudzu and Japanese honeysuckle have become rampant.  They are not considered a pest where they came from.

There are not many plants whose leaves and growth patterns change almost completely from growing on the ground to growing vertically, up a tree for example.  English ivy when growing vertically does not look like ivy.  The leaves lose most of their spines and points.   It even blooms which it never does on the ground.

Ferns have a unique life cycle.  Their spores produce tiny plants that do not look like ferns.  These tiny structures reproduce sexually from which a recognizable fern evolves.

Apples produce ethylene gas that can be used to make green, immature fruit ripen.  Bag an unripe pineapple with an apple and it will ripen quickly. Many fruits are picked immature then gassed when needed.

Many wildflowers are called ephemeral because they are short lived.  They appear before deciduous trees and shrubs put on new leaves.  This is how they get enough sun light to grow briefly, flower, store energy and then go dormant.

Goldenrod is not responsible for hay fever; ragweed is.  Both plants bloom at the same time and goldenrod is much more visible.

If you prune off all the green foliage from a conifer it will die in contrast to doing the same to deciduous trees and shrubs.

Not all trees are long lived.  Lombardy Black Poplars are only good for 15 years.

Not every seed pod will have give viable seeds.  The way to tell if the seeds are alive is to cut one in half, its interior will be green if alive brown if dead.  You can safely assume that the others in that pod are the same.

Some plants have unpredictable bloom cycles.   Our native Yellowwood trees that we have so many of in Franklin do not bloom consistently. No one I know can explain its erratic bloom pattern.  Mine are 14 years old and still have not bloomed.   They were started as seedlings. 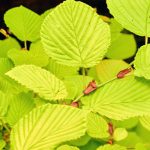 Some plants bloom in the winter.  Winter Hazels are a good example.

There are daffodils that bloom in December.  One example is Rijnveld’s Early Sensation.  It and a few others are classified as very early.

A dead Chestnut stump can be kept alive for years by the neighboring trees roots sharing nutrients.

Many trees and shrubs have regional hardiness.  For example, the same species of White Oak in Michigan may not be happy in Western North Carolina.  The reverse is also true.  This has practical significance when ordering from a mail order catalog.  Unfortunately, there is not a list of plants that are regionally sensitive.  Good reason to use local nurseries.

Dr. Bob Gilbert is co-founder of Smith Gilbert Gardens in Kennesaw, Ga. Karen Lawrence is a wildlife and horticultural photographer from Franklin.