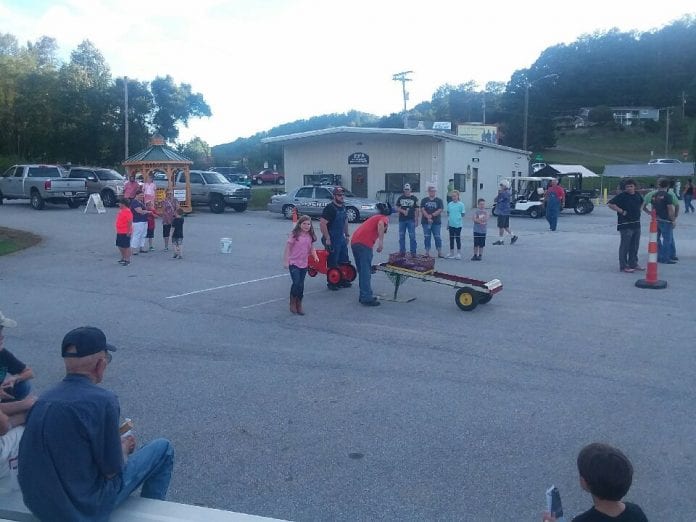 When the shy little girl first approached, her voice was barely

audible, then suddenly she grinned from ear-to-ear, displayed her blue ribbon and yelled, “Girls rock!” It was both amazing and amusing to see her transformation. She had just competed in the Kids Pedal Tractor Pull at the 2018 Macon County Fair and was panting while beaming. Neva Dills wanted to be interviewed to share with everyone what it means to win (and of course that girls “rock”). She was so excited one would have surmised Neva had placed first, but she clarified.

“I just went for it, and I came in third place in my age category with boys and girls,” exclaimed Neva.

The nine-year old glowed, and it seemed her voice cascaded an imaginary fountain of bubbles as she spoke of making it to the finish line. There had been six to seven other kids in the 9 to 11 age group whose family and friends cheered them on although some did not complete the pull. But, it was the participation that mattered – earning them a green ribbon. On the sideline for Neva was her mother Melissa Thomas Dills and some encouraging onlookers who heard her calling young Dills, “Killer.”

“We were just joking around and picked up the name to psych the boys, and the crowd caught on and started saying it,” said Melissa.

Tractor pedal pulling has been at county fairs for years and is one of the most popular traditions. It is an exciting family-friendly attraction that divides kids into age categories, then each child is hoisted onto a pedal tractor to drag a sled laden with weights as far as he or she can go (hopefully to the finish line). The catch is, the further the tractor goes, the more friction it creates, and it becomes harder to pull. It is a fun-filled event that elicits laughs and roars from the crowd.

“I didn’t give up, and I did make it all the way,” exclaimed Neva. “It  was a lot harder than I thought. I felt kinda shaky, weak and nervous, but I am happy that I actually participated and made it. I heard the crowd cheering for all the kids, saying ‘go, go, go, don’t stop, don’t stop!’”

Neva did not go to the fair intending to enter the tractor pull. In fact, she went because she enjoys the fair and has been going with the family since she was an infant in her mother’s arms.

“It was a surprise that she participated [in the tractor pull] because she does ballet and has taken dance since she was four. This year she entered the art contest at the fair which was more expected,” said Melissa.

“I did not know it [the tractor pull] was that day; but when my mother told me, I had courage because dance strengthens your leg muscles and arms,” said Neva. “I just think that girls rock because I’ve seen the boys in the gym doing all those pushups. Then I see the girls doing splits and lifting their legs up, and the boys can’t go half way. I’m glad boys and girls can participate. Boys can even do ballet. They need boys in ballet to lift the ballerina.”

When Wayne Proffitt established the fair in the 1950s, Melissa’s uncle Allen Thomas was in Future Farmers of America and helped with some of the building along with his class members.  Melissa’s father, Hoyt Thomas entered pumpkins into several contests. The family has a legacy of supporting the fair as an annual custom that continues as a heartfelt community commitment.

“Neva loves it and she continues the tradition, and she wants to go every day. In the past she had rabbits and had to go everyday. She participates in different events, and we support the raffles.”

Neva is home-schooled and is very active in the community for her extra-curricular activities – from participation in church, to the dance class she attends and the annual anticipation for the fair.

“This has enriched her life because she gets to see her friends and she also gets to see others’ wares such as baked goods, flower arrangements, and canned goods,” said Melissa. “And, she gets to see the different businesses and entrepreneurs. She even won a game card to the Fun Factory for participating in one of the church events.”

Melissa said her family will continue to support the fair and encourages others to come each year and participate whether entering a raffle; bringing a cake for the contests and to make money for the fair; visiting the vendors and animal displays; or entering a tractor pull like her daughter. She emphatically expressed that to attend is to win for everyone, especially since the fair needs a new roof.

The little nine-year old’s grown-up advice to others: “Just go for it and be yourself, and give it your all!”

Pedestrians implored to wear reflective clothing after dark; walk on...

Spotlighting deer hunters will have their day in court; lawful sportsmen...