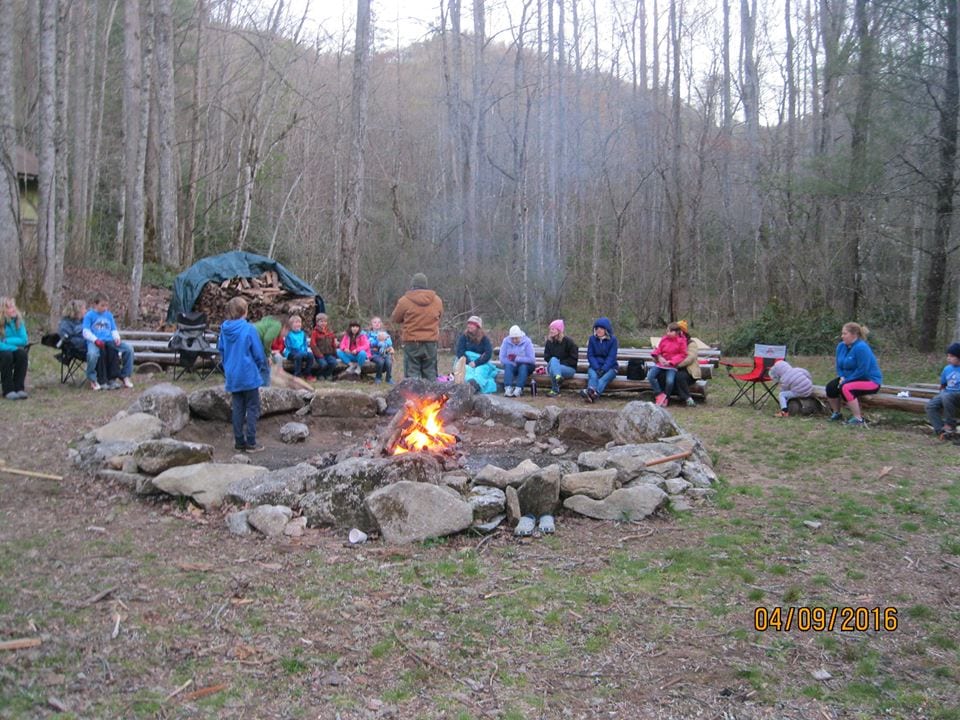 “When we re-opened Lumpkin Adventure Base two years ago, we had an open house, an event we repeated last year,” said Charlie Vargas, who has been instrumental in the revitalization of the camp.  “This year we decided not have an open house again, but to instead have an event that hopefully would become an annual early spring celebration of the base camp. We thought a day of fun and adventure would be more appealing and less business-sounding. It’s an opportunity to raise awareness of the facility, promote appreciation of our natural resources and conservation, and encourage families to spend time together outdoors.”

The Lumpkin Adventure Base is located in southern Macon County in the Tessentee Valley. It is 117 acres of beautiful forested land, nestled up against the Nantahala National Forest. The camp serves Scouts in the Daniel Boone Council and the Carolinas Peaks to Piedmont Council as well as surrounding Boy Scout and Girl Scout Councils as a weekend camping facility. The camp will be used for camporees, training events, day events and family camping programs. The base is also proud to serve other youth groups and non-profit groups who need an affordable outdoor setting for their programs.

The Adventure Base is also a great location for Venture Crews to use as their base of operations for a summer adventure to Western North Carolina and north Georgia.

In 1937, the Lumpkin family set aside property in the Wayah Bald area of Macon County to be held in trust for the permanent benefit of Scouting. In 1957, Mrs. Lumpkin sold that property, and purchased the tract of land that is located in the Tessentee Valley.

For many years the property was only used by a few local troops of Boy Scouts and Girl Scouts. In the fall of 1974 the North Carolina Outward Bound School (NCOBS) arranged to lease what was then called Green Cove, from the trustees that oversaw the will of Mrs. Lumpkin. Two of the trustees, Lloyd Swift and Bennie McGlammery were instrumental in designing and coordinating the new agreement.

NCOBS built all of the structures and conducted programs out of Green Cove for the next 30 years. In 2005, due to low enrollment, NCOBS no longer needed the property, so all of the buildings were boarded up.

In the years following, the camp was left unused. The property was heavily vandalized, and overgrown. In the fall of 2013, Mike Fischesser, past NCOBS program director and part of the original Pioneers that built Green Cove came to visit the old camp, and was distraught at what he discovered. He called upon the Daniel Boone Council leadership to re-visit the possibility of it being used by the Scouts of Western North Carolina, as the Lumkpkin family had wished. Fischesser orchestrated a massive effort to restore the Cove, with many of the original Outward Bound staff, who built the camp in 1975. They traveled from all over the country to roll up their sleeves and go to work again.

Since the fall of 2013, the Daniel Boone Council volunteers and the Lumpkin Trust Board of Directors have worked together to bring the camp back to life, along with several partners in this project including The Glass Foundation, The Quigley Family Foundation, Bob and Gwen Litten, NC Outward Bound Alumni, Highlands Doors and Windows, and the Service Engineering Company. .

Saturday, volunteers and stakeholders in the camp will be on hand to promote all the camp has to offer, while giving families the opportunities to get outdoors and do something together.

“We came up with a list of things to do: nature hike with scavenger hunt, with emphasis on Leave No Trace principles; human foosball with a new court; turtle river race (to highlight Nichols Branch that runs through the property); nature lessons by Coweeta Lab staff; and a tower built by Boy Scouts to climb on and to learn about pioneering (lashing poles together to build structures),” said Vargas. “We also have several games to play: disc golf derby, corn hole, and old-time games using poles and ropes like they did decades ago. There will be Dutch oven cooking demos (and probably peach cobbler to sample), campfire safety lessons, and leather craft where kids can stamp their names on a leather wrist band and take them home.”

While the camp is used annually by Boy and Girl Scout troops across Western North Carolina and Northern Georgia, the Macon County community at large still may not know about Macon County’s best kept secret. Community events such as Saturday are intended to promote the camp and let the public know it’s available for a large variety of events.

“We hope that the base camp will get more use, recognition, and volunteer time, and that the community will perceive the base camp as a valuable local natural resource that they can use and visit,” said Vargas. “We also hope that children will get excited about Cub Scouts, Boy Scouts, and Girl Scouts, all of whom will be represented.”

Lumpkin Adventure Base Camp is located at 566 Nichols Branch Road, Franklin. For more information about the camp, visit Lumpkinadventurebase.org.