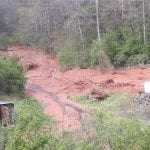 Sonya Watson said she had a “bad feeling” about Easter’s late evening storm that dumped several inches of rain in Macon County, produced high winds, and spawned tornadoes in North Carolina and surrounding states. She and her 14-year-old autistic daughter, as well as her mother-in-law, Mary Sue Bettis, 68, resided in a mobile home just off Pressley Road in Franklin.

Watson could not sleep as the storm raged on through the early morning hours of April 13.

“I was watching television and looking out and seeing it raining sideway. My dogs were acting weird. Sue got up and I told her I didn’t like how it looked. A tornado watch came up on the phone so we discussed different plans of what we needed to do if a tornado came through.”

As the storm dissipated, Watson said she got her mother-in-law, who suffers from various health issues, back to bed, and she stayed awake until 3 a.m.

“The storm died down, so I decided to lie down on the couch. I don’t usually sleep on the couch, but I’m glad I did that night.”

Watson was asleep for about an hour when she heard loud, “weird noises … popping and cracking.” And then the mobile home, where Watson had lived for two years, began to shift.

“Stuff started breaking and hitting me everywhere. The trailer was tilting and slamming me all over the room. Cabinets hit me in the head and just about knocked me out. All I was thinking was that I needed to get to my daughter’s bedroom.”

Watson said she did not fully comprehend the situation until later that evening, but she said when she managed to make it to her daughter’s bedroom, there was a light shining on her bed – from where she did not know because it was pitch black outside – and the bedroom was untouched and her daughter was asleep.

Watson told her daughter to stay in her bedroom so she could check on her mother-in-law. The mobile home continued to slide gradually; Watson went to where her mother-in-law’s add-on dining room, porch, and bedroom had been. The dining room and porch were gone and she could hear Bettis screaming farther up the hill. Watson said she still did not fully consider there had been a mudslide. She thought the porch and dining room had been ripped off the mobile home by a tornado.

Neighbors and family members came outside with flashlights.

Watson went back to her daughter’s room, wrapped her daughter in a blanket, and carried her to where there was an opening in the wall. “Mama’s got you,” I told her. “I needed to get her out.” The mobile home slid more and turned down the road before becoming wedged on a pole.

Watson could hear her mother-in-law, whose bedroom was detached and stuck at the top of the hill, screaming. Neighbors and family members braved the mudslide to clear glass and debris, pull off doors, etc. to get to Bettis and help her out.

“When I got my daughter to an opening, it was just an expanse of mud,” said Watson. “That’s when I saw the fire department coming  and I saw Tim’s face [a fireman; last name unknown]; I’m a manager at Wendy’s and I know him from there and from seeing him around town. I saw his familiar face and grabbed his hand. I stepped off in the mud with my daughter … I just had on a tank top, pajama pants, and I was barefoot. The mud was knee-to-waist deep.”

Watson had to tell the firemen that her daughter could not understand what they were saying or what was happening. “But she was so brave. I’m so proud of her. I’m just so glad that she’s okay … that we’re all okay.”

The mudslide also took off add-on sections of another house a little farther down the hill; Watson’s four vehicles were destroyed as well as a cousin’s older car that was farther up the hill. Watson’s five dogs and a cat were not injured, but she imagines her birds and fish in the home have died. She has not been able to get back in the home because it is unstable, and also the road is blocked by the thick mud. Everyone on the road and in the area of the mudslide was evacuated during the early morning of April 13.

Watson lived in an area where other family members have homes above and below where her mobile home was situated. Banks and hillsides were covered with trees, bushes, and plants. Even though there had been a mudslide in that area 25 years ago, she said, “Nothing made us think it would happen again. Our private road had just been graded and everything seemed fine. I was more worried about a tornado.”

Currently, Watson, her daughter, and Bettis are living temporarily in the Comfort Inn in Franklin. She was able to arrange for her pets to be housed temporarily with friends and family members.

“They won’t let us go into the trailer because of the instability,” she said, “but I’m hoping that I will be able to at least get my photo albums and some framed pictures out at some point, and to find my phone, which has all my contacts on it.”

Watson said she has been inundated with support from churches and concerned citizens who are trying to find them a place to live. “People have been so nice. The Red Cross has been fantastic. We’ve gotten clothes, meals … most of what we need initially. But I feel like I need to get my  daughter somewhere soon so she will feel stable.”

Watson said she has had trouble sleeping but realizes she was able to maintain some fortitude during the hellish night. “I’ve never fought so hard in all my life to get to my loved ones and get out of there.”

She credits God for her demeanor and for saving them.

“We felt His hand for sure,” said Watson, tearfully. “No place was touched where my loved ones were sleeping. My bedroom was upside down and twisted and part of walls were gone. For that reason, He had me sleep on the couch that night. I told Him [God], ‘You watched over us in the storm.’”