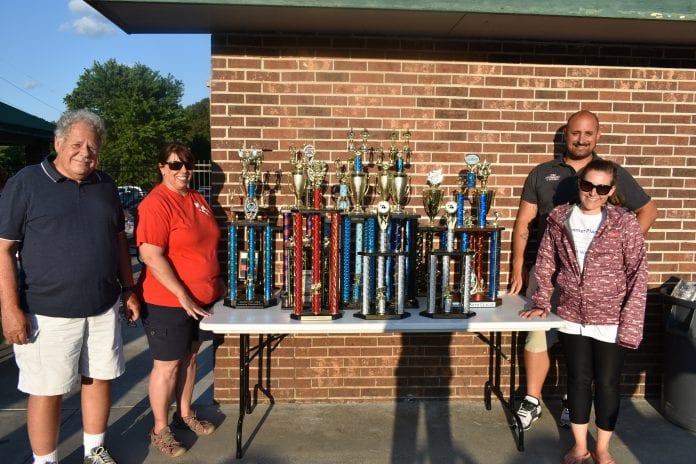 The Franklin Amateur Swim Team (FAST FINS) has closed out its 2019 swimming season with many records having been broken. Dina and Dwain Picou have been coaching the swim team for 22 years. With their combined 78 years of coaching experience it is no wonder that FAST has been the Mountain Swim League (MSL) Champs for 16 years straight, including this year. Jamie Picou, their daughter, has been swimming and coaching for about 22 years. Anthony Zari has also been helping coach for the past five years.

MSL includes teams from here in Franklin along with teams from Highlands, Jackson County and Cherokee, who all compete against each other throughout the season. Practice here in Franklin is held at the recreation park pool and takes place three evenings a week, Monday through Wednesday, with competitions held on Thursday night.  There are a total of five competitions in which FAST competes against one of the other MSL Teams, along with a Conference Meet that includes all four teams. This year, 123 kids were on the team ranging in ages from 5 to 18 years old.  Swimmers are grouped by age and gender and 80 heats are held at each swim meet. Meet competitions usually last three to four hours if there are no weather delays.

In total the team will be sending 55 swimmers to the All Stars this year. In order to qualify for All Stars a child must have a time in that event that is at least as fast as the qualifying time for that event.

Aside from coaching the FAST FINS, the Picous have also coached the Franklin High School Swim Team for 16 years and they started the Macon Middle School team in 2005. The middle school team swims from August through October and the high school swim team swims through mid November at the community pool. The pool is heated though, for those chilly days in the fall.

“We are really pleased with how far some of the swimmers have come this summer,” agreed Dwain and Dina. “We really could use more time in the pool, and many kids would benefit from a year-round program. But we are excited with the records that were set, and the number of swimmers that made Junior Olympics and All Stars.”

The coaches all hope that each and every child will return next summer, along with some new faces, and continue to break records, have fun, and master some swimming techniques.

‘Brothers Like These’ event highlights writings from PTSD treatment program