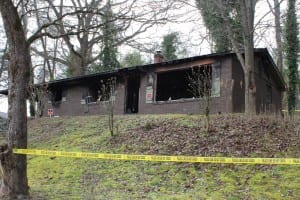 The Macon County Fire Marshal’s Office in cooperation with the Franklin Police Department and the State Bureau of Investigation is investigating the cause of a residential structure fire that occurred Saturday evening that claimed the life of Dennis Daigle, 54.

According to Fire Marshal Jimmy Teem, authorities know where the fire started but will continue to investigate until they know what started it.

The fire was first reported to authorities at 7:29 p.m. on March 5, but at that time it was uncertain if someone was still inside the home.

“At the time of the first call it was reported that one occupant was out of the structure but one was still inside,” said Franklin Fire Department Captain and Public Information Officer Justin Setser. “The first arriving public safety personnel on scene was Franklin Police Department and a Franklin volunteer firefighter.”

After arriving on scene, authorities reported heavy fire at the front of the residence and that an individual was still in the structure, possibly in the back left bedroom area.

“Once the first arriving fire engine arrived on scene a one-and-three-quarter attack line was extended to the front of the structure and into the residence,” said Setser. “The firefighters began an aggressive fire attack and search for the victim.”