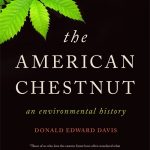 In 1904, a blight began killing the American chestnuts. The blight, which is a plant disease caused by the fungus Cryphonectria parasitica was accidentally imported from Asia. These trees were considered the giants of the forest, sometimes reaching a height of more than 100 feet tall with trunk diameters often well over 10 feet. It is a tree that not only thrived in the Appalachian mountains, but that was also a source of food for the Cherokee. Chestnuts were roasted and then ground into flour for cakes and breads and also stewed into puddings and soups.

Donald Davis decided – after researching and writing about chestnuts for his 2003 book “Where There Are Mountains: An Environmental History of the Southern Appalachians” – that the American chestnut deserved more attention. He spent five years of research and roughly 10 years writing the just-released “The American Chestnut: An Environmental History.” Davis, a researcher living in Washington, D.C., will close his promotional tour for the book at Cowee School Arts and Heritage Center Nov. 12 at 11 a.m. During the presentation, which is free to the public, Davis will be hosting a reading of his new book.

“After learning how important the tree was to the southern mountain region, I decided that the American chestnut would be the topic of my next book,” he explained. “In my Franklin talk, I will discuss the impact of the tree on the communities of Appalachia, as the species not only provided nuts for food, but also the raw material for tanning leather, and the wood for home construction, railroad ties, fencing, coffins, and shingles. I will also address the arrival of chestnut blight which, after 1904, killed more than 5 billion trees across the tree’s range. During the presentation, I will be sharing with the audience numerous archival images that are also published in the book, including a photograph of two of the largest surviving American chestnut trees on the planet.”

Davis is an independent scholar, author, and former Fulbright fellow who has authored or edited seven books, including “Southern United States: An Environmental History.”

“Prior to 1910, the American chestnut was closely associated with fence building, shingle splitting, livestock husbandry, and even moonshining. For residents of Appalachia, where the trees defined the pre-World War II landscape, the loss of the American chestnut also served as a metaphor for the passing of a self-sufficient and forest-dependent way of life. “

Blight, or fungus, enters chestnuts through wounds on susceptible trees and grows in and beneath the bark. Eventually the cambium (cellular plant tissue) is killed all the way round the twig, branch, or trunk.

“Americans were shocked by the speed at which entire stands of trees often succumbed to the disease,” David noted. “In 1906, just two years after the fungus was discovered at the Bronx Zoo, tens of thousands of trees were already dead in New York City, and thousands more were showing signs of the illness. In fact, so many chestnut trees died in the metropolitan area that year that the New York Observer, a publication edited by Presbyterian minister John Bancroft Bevins, likened the fungus to the plagues of Egypt and suggested the disease was further evidence the world was cursed with sin.”

In his new book and in his presentation on Nov. 12, Davis will share how over the last several decades, considerable effort has been expended to try to restore this iconic species to the forest.

Small farmers finding alternative ways to get goods to consumers