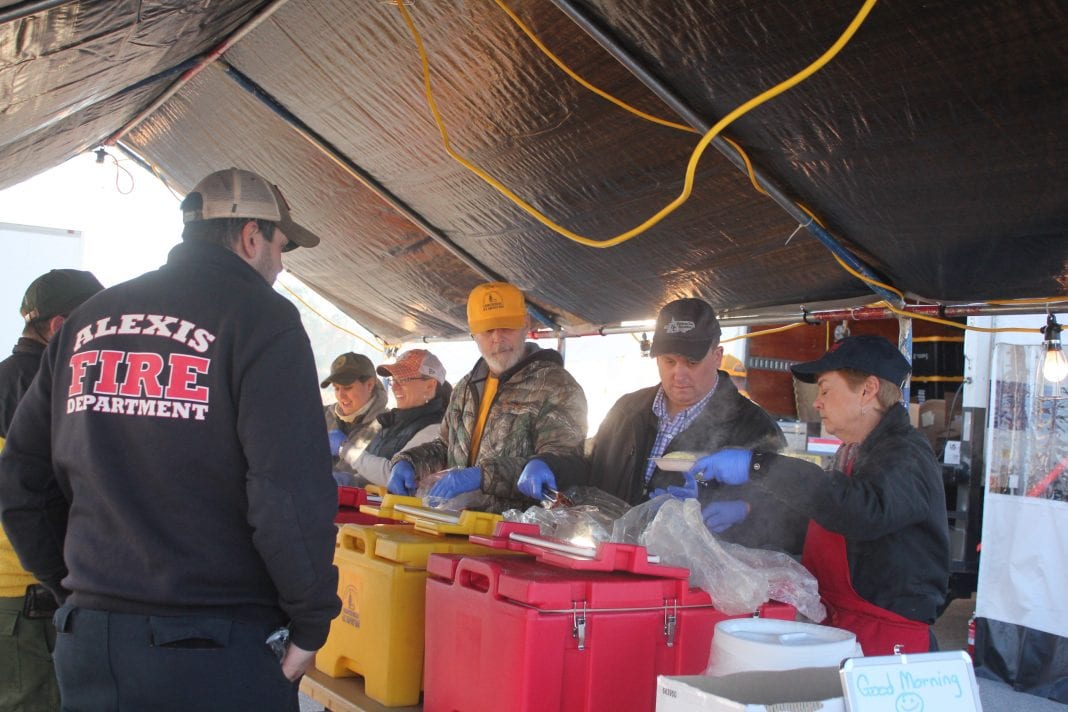 Since fires first began to blaze in the Nantahala National Forest, thousands of fire fighters from 42 different states have spent time in Macon County. In between their 12 hour shifts, keeping them fed, and meeting the required 3,500 calories a day mandated by the state has taken droves of volunteers and organizations.

“If they thought we needed it, even if we didn’t realize we needed it, chances are someone donated it to us,” U.S. Forest Service Incident Commander Mike Dueitt told commissioners during a briefing regarding the community’s kindness. “I have never seen anything like it.”

In addition to the community donations, keeping the firefighters fueled while they battle the blazes in our mountains took all hands on deck for the Lyndon B. Johnson Job Corps students.

“We initially mobilized the camp crew on Nov. 10,” said Marvin Ramsey, business  community liaison with the Job Corps. “We have 12 students and four staff who have done a tremendous job so far.”

The Job Corps, which is a federal program run by the United States Forest Service has been working 16 hour days to keep the firefighters fed throughout the day. From making sandwiches for the lunch bags the firefighters take to the front lines, to serving breakfast and dinner alongside the North Carolina Baptist Men Association, the students and staff at the Job Corps have been working around the clock.

“I think it’s important to help because it coincides with the overall mission of what the Job Corps represents, ‘helping others.’ We are providing a service to assist the firefighters and the town of Franklin in any way, shape, or form, we can. We love our community and want to serve it.”

Ramsey said one of the most rewarding parts of working to feed the firefighters has been seeing the community’s response to the men and women in Macon County to combat the wildfires.

“I would like to take this opportunity to thank the children who have provided the pictures and encouraging words for the firefighters,” said Ramsey. “It is such a joy to see the smiles on the firefighters’ faces when why come off the mountain working long days to open their lunches and see a picture in crayon that was packed in their bag. It is priceless!”

A few days after the Job Corps mobilized their crew to start feeding the firefighters, the North Carolina Baptist Men and Women’s Disaster Relief Ministry set up a mobile kitchen to feed the droves of firefighters. The Disaster Relief Ministry’s mission is to relieve human suffering caused by disasters by providing among other things: hot meals, debris removal, child care and family assistance. Our purpose is to involve men, women and students in missions.

Feeding the firefighters was the first time the ministry had served such a group. Generally they serve in a natural disaster. Several of the volunteers at the mobile kitchen on Thursday morning had just left Kinston, N.C., after serving victims of Hurricane Matthew.

So far, the N.C. Baptist Men and Women’s Disaster Relief Ministry has averaged feeding just shy of 300 meals for breakfast and another 300 for dinner, the two meals the ministry provides the firefighters.

On Thursday, among the dozens of volunteers with the ministry, were three men from Franklin, including Mike Johnson, who said that serving the firefighters was as much a privilege as a service. This week, the current team of volunteers with the association will be rotating out and new volunteers will be coming in. With the holidays, they are short on volunteers and are asking the Macon County community to help fill the gaps.

“The N.C. Baptist Men’s Association have their hands full cooking for hundreds of firefighters, so volunteering a few hours is the least we can do,” said Wayne King, chief of staff for Cong. Meadows. “It is an incredible thing to see their operation and to see how both the association and the Job Corps have really stepped up to make sure the firefighters have all they need.”

For more information on the N.C. Baptist Men’s Association or for information on how to volunteer, call (800) 395-5102 ext. 5605 or visit www.baptistonmission.org.

Voter information for the N.C. primary set for March 15