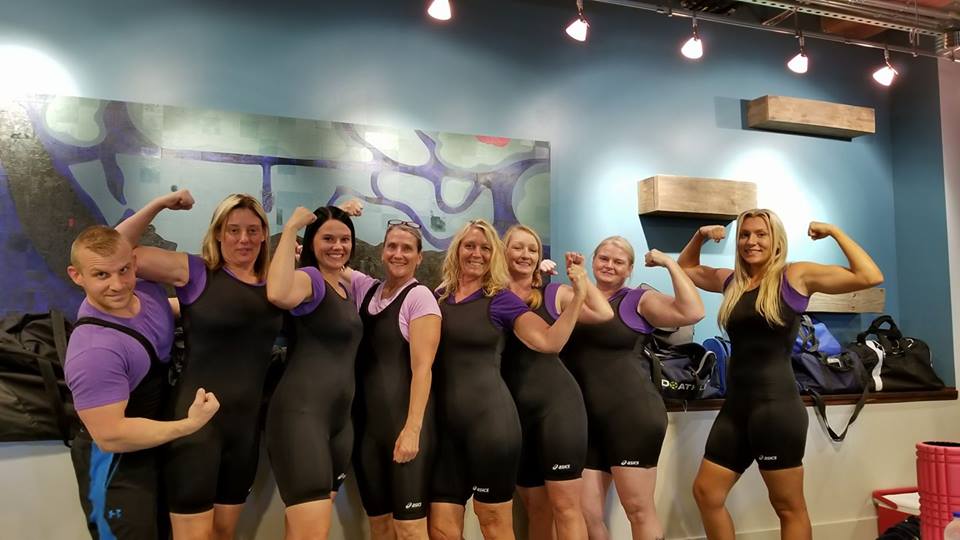 The StrongBack team, comprised of several individuals in their 40s and 50s, only just began their powerlifting careers six months ago.

Powerlifting is a world-wide sport where athletes of all ages and fitness levels compete over three main weightlifting events, the Squat, the Bench Press, and the Deadlift. All the women on the team began training with their coach with the same goals in mind, to become healthier and feel better about themselves.  Most started with Coach Rick Tarleton in the Fall of 2016.  After a few months of basic fitness training together, they all decided to make a goal: to train to compete in their first powerlifting competition.

Virginia Gantos-Waters started training originally to firm up her body.  After cleaning up her diet she lost more than 40 inches and has lost 30 lbs. of fat.  She took on the role of team captain, helping everyone get organized for the meet.  She earned a first place and set a masters division record at the meet.

“I feel much stronger physically, mentally, and emotionally,” she said. “This is a lifestyle for me now and I thrive off of lifting weights … and by the way, females don’t bulk up; I look like a normal female but can lift some amazing weight.”

Kecia Hursey earned first place and a national record at the meet and said that the confidence she gained was better than any award. “I have more confidence, feel more comfortable in clothes and with myself in general,” she said. “It’s amazing to see how strong you really are. I couldn’t ask for a better coach and support group from all the other women.”

Cecilia Teem wanted to learn how to lift weights and reverse the effects of aging.  She started training with the team learning technique consistently improving her strength and losing body fat.  She placed first and claimed a masters division record at the meet.

“Being a part of the team has helped me grow physically and mentally,” said Teem. “I am challenged every day to be better than I was the day before. Three years ago I would have laughed if you had ask me if I thought I might be competing in powerlifting competitions.”

The team roster is already growing with several more women having already joined the team. The StrongBack team is currently training to compete in the Hickory Classic, Oct. 7 in Hickory, N.C.  Coach Rick will also be competing at the USPA Drug-tested Worlds Competition in November.

If you have questions about how to incorporate strength and fitness training into your life, or interest in joining the StrongBack team at an upcoming competition, contact Coach Rick Tarleton at rick.tarleton@gmail.com