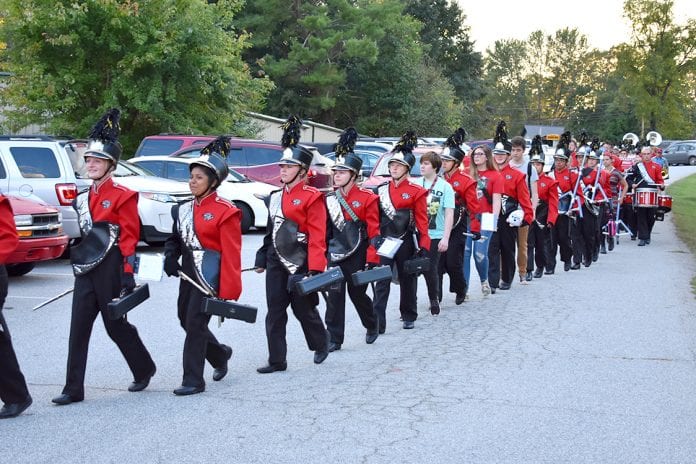 The Franklin High School Marching Panther Regiment is busy “gearing up” for a huge event. The band has been invited to attend the “Sugar Bowl” in New Orleans on January 1, 2020, not as spectators but, as participants in the halftime show at the Mercedes-Benz Superdome. The show will be aired on TV and the band will perform along with a few other select school marching bands. They were chosen from over 700 bands in the country, classified 2A, and only 8 bands were selected for this venue. A 2A classification means that the band has between 80 – 120 students enrolled in that program.

The fundraising has begun to help raise the money needed to travel to New Orleans. The fruit sale is in full swing and promises to bring in a substantial amount of funds. The cost of this trip will be $1000 per student and there are approximately 100 students eligible to attend. Since the event will take place in 2020 this year’s seniors will not be attending but the Macon Middle School’s eighth graders, who are currently enrolled in band, will be going on the trip as freshmen at FHS. They have also started raising money for the trip, through the fruit sale. “This is a big honor” stated band teacher Buddy Huckabee. “The students are very excited about traveling to the “Sugar Bowl” and about being on national television.”  Huckabee says that they will also hold other types of fundraisers in the spring but he is unsure exactly what they will be. That gives the band about one and a half years to raise the funds needed to attend the “Sugar Bowl.”

In order to be eligible for the marching band students must maintain at least a “C” average and have been in band or have taken music lessons, previous to entering ninth grade at FHS. They do not accept students into the program who have no prior musical experience. Students begin practicing for competitions as early as July, during a summer camp program, in order to be ready to perform when school starts in late August. Huckabee spoke about the difficult task of coordinating 100 students all playing a variety of instruments and preparing for competitions. He has been doing this for 18 years and relies on the students to take it seriously and to help with the coordination of the events.

The fee for students enrolled in the marching band is $300 per year. Huckabee stated that the instruments and the uniforms were quite old and sometimes need to be repaired. Students usually pick up the cost of repairing their instrument themselves. The uniforms are about 18 years old and the normal life of a uniform is 10 years. Students treat the clothing with utmost care in order to stretch their wear ability for as long as possible. So, the need to fundraise, to keep the band going in full swing, is a never ending process.

As of late the band has been traveling to Atlanta, Ga. on weekends, to compete with some 30 – 35 of the best high school bands around. FHS has six venues lined up at various high schools and have completed four of the six competitions so far. The marching band will also represent FHS in the Christmas Parade this year and there will certainly be many other opportunities for the band to display their skills throughout the school year.

STEM projects are teaching students through hands on experiences

Macon County to give out $59,000 in merit-based bonuses; addresses transportation...