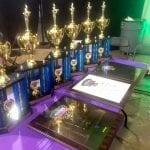 The Franklin High School Marching Band travelled to Louisiana this week to perform during the halftime show of the Georgia Bulldogs vs. Baylor Bears football game. The 80-member band performed in front of thousands during the Sugar Bowl Parade, marching down the French Quarter in New Orleans. The Allstate Sugar Bowl New Year’s Eve Parade was a Mardi Gras-style parade with floats, bands and more.

The Panthers were selected last March for the honor of performing in the Sugar Bowl parade, and have been fine-tuning their skills ever since. They were chosen from more than 700 bands in the country, classified 2A, and only nine bands were selected for this venue from across the country for a combination performance during halftime in front of 85,000 people. A 2A classification means that the band has between 80 – 120 students enrolled in that program.

“For any Bowl Game, directors across the country have to go through a series of audition materials and sending in videos, tapes, and judges comments from the past two or so years,” Franklin High School Band Director Buddy Huckabee said of the process last September.  “You also have to send in pictures, audio, and video files of any extra things you do within the community like jazz band performances, parades, veteran’s celebrations, etc. Directors then can choose the bowl game for which they would like to be considered.  After their audition committee goes through hundreds of audition packets and bands are selected for the bowl game (usually 10 per game) for the Sugar Bowl, Alamo Bowl, Gator Bowl, Citrus Bowl, Liberty Bowl, and Orange Bowl.”

In addition to the band performing in the parade, Franklin High School student Travis Carpenter was selected for the Center Snare position for the mass band during the Sugar Bowl Performance, and was given the chance to start the entire production.

Ahead of the New Years Day performance at halftime at Mercedes-Benz Superdome, the Franklin High School Marching band racked up the awards for their performances at the Sugar Bowl Battle of the Bands including the the Jackson Square Best Band Award, the overall highest award a band can receive during the Sugar Bowl Battle of the Bands.  The band also received six first place trophies for: General Effect, Music, Marching, Colorguard, DrumMajor, and Class A Band.

“This has by far been the best trip and highest honor I have ever achieved in the 23 years I have taught, and the 18 years at FHS,”  raved Huckabee. “We have definitely put our small town on the national map.  A segment of our Franklin Band’s French Quarter performance was recorded and selected to be used for the nationwide commercial on New Years Eve for Dick Clark /Ryan Seacrest’s Rocking New Years Eve program! Seeing our kids on that national commercial brought tears to my eyes.

“We have all had the time of our lives!  I want to personally thank all the parents and school board members for helping us get to this milestone. I also want to thank Mayor Bob Scott and the rest of the town and Veterans Groups and Women’s Clubs that helped us fund this trip.  The students, the chaperones, and everyone involved has really gone above and beyond to showcase our town and we are very proud to be able to honor them in this way.  Thank you all and Happy New Year!”