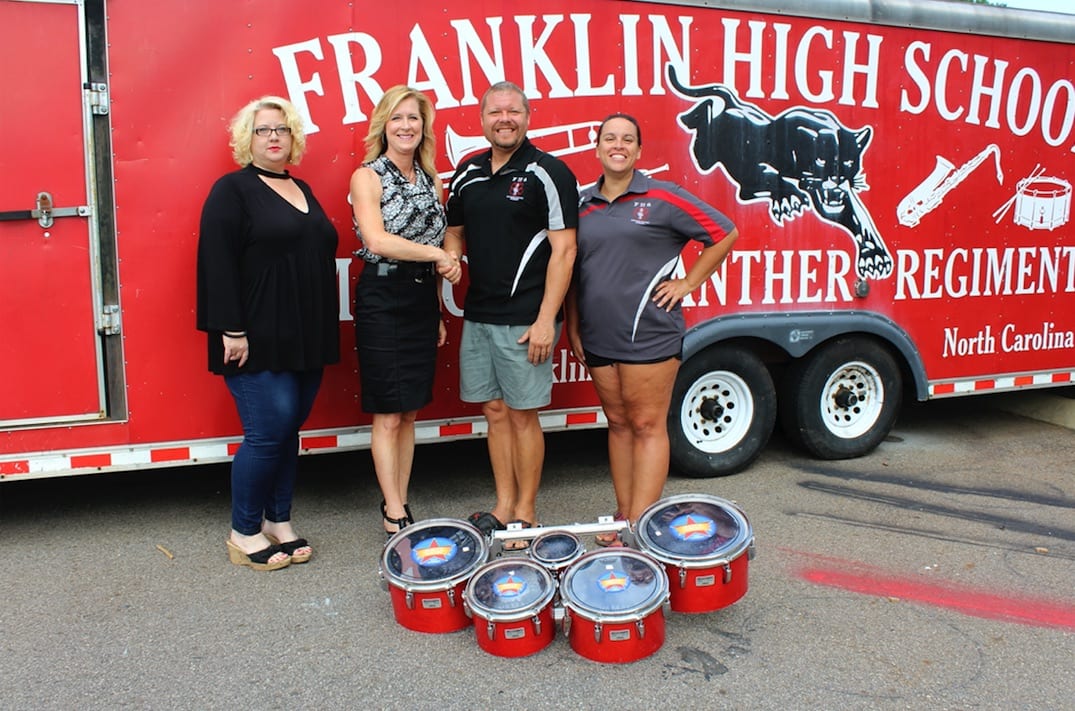 The Franklin High School band is one of the largest organizations in the school district in terms of student participation, yet the needs of the band aren’t met by the school’s budget, bur rather primarily accomplished through parent and student fundraisers, and band booster parent organization.

In 2003, the band boosters, with the help of the county purchased the band’s uniforms, which are  currently still being used. Despite 14 years of use, the uniforms are still in good condition as the students know and understand that band uniforms costs approximately $500 each. Ten years ago, in 2007, the county helped the band with some much needed low brass and drumline equipment.

“Students have also taken care of that equipment and it is still in good usable condition,” said FHS Band Director Buddy Huckabee. “When we are in desperate need of anything, our county and community usually come through to help us.  Since the downfall of the economy in 2008, we get tremendous support from our county in other means, but there is just not an allotment readily available any more for the purchasing and funding for band equipment as in the past. Unless it is an immediate need, I look to the parents and students to help raise funds for these things, and I do feel this helps students take more pride in their equipment when they have to work for what we have.”

The community once again stepped up last week when the Franklin High School Band was gifted a complete Yamaha drumline. Band parent Vickie Kimsey made the donation to the band possible.

“The band’s drum equipment was very old and in less than good condition,” said Kimsey. “My son is one of the drummers on the drum line and the drums they were using were hard on their backs because of the weight. The new tenors are 10 lbs lighter in weight and the drum set as a whole is in excellent condition.  It includes five tenors, five bass drums and seven snares in addition to all the stands and accessories.  We had a great opportunity to acquire this set and it will enable the FHS Band’s future growth for years to come.”

“I want to thank Vickie for her generous donation to our program and also the school system and community for their continued support every year,” said Huckabee. “We are proud to represent Franklin and the state of North Carolina each and every Saturday from mid-September through November in the southeast at our regional and national marching competitions. We appreciate your support.”

According to Huckabee, FHS’s original Mapex model drumline was approximately 10 years old. When FHS got the Mapex line in 2007, it cost just shy of $10,000.

“It has normal wear and tear on it, and fortunately the kids always take pride in their equipment so it is well taken care of,” said Huckabee. “The only downfall we had with the older drums is that with a less expensive brand, the sound and functionality (and repairs) can be costly.  We budget about $1,200 to replace the drum heads every year on the Mapex drums.  The new Yamaha drumheads will be a little more expensive, but in the long run, they will be more durable than the Mapex and could potentially last longer.  When something is made of cheaper brand, it can damage easier, and just does not have the sound that a better model drumline would have.  Even a professional playing on a cheaper set will sound less advanced.  The newly purchased line is a better brand (Yamaha), and naturally a better brand is going to sound better.  The Yamaha drumline that we recently received would have cost around $12,000 if purchased brand new.  We now can make our older set a ‘back-up’ and ‘bad weather’ and travel set and keep the Yamaha drums as a performance and competition set to prolong the life of both sets of drums.  The new drums have been used and taken care of by a world touring drum corps – who naturally are going to take care of them – and were featured recently in the Macy’s Thanksgiving Day parade.”

“We have some that are still being used in our program that date back to the 1970s,” said Huckabee. “They may look rough, but they are still usable.”

Huckabee said the band is gearing up for their annual fundraisers that kick off with the beginning of school.