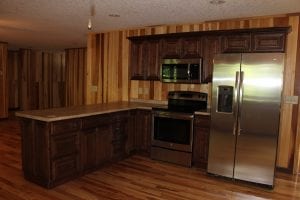 Building and grounds priorities were on the agenda Monday night at the July meeting of the Macon County Board of Education. Board members were presented with a bid for the Franklin High carpentry house and were given a recommendation to replace the gym roof at Highlands School.

After six years and dozen of students in Rick Rogers’ carpentry class putting in time and talent, Macon County School officials accepted a $162,500 offer on Franklin High School’s carpentry house on Monday night and are now waiting for the closing to finalize. The three bedroom, two bath house was listed with Remax Realty agent Evan Harrell for $169,900.

The Franklin High School Career and Technical Education (CTE) program constructed the Carpentry House located at 7 Pleasant Hill Drive in Franklin as part of the program. Students in the program have worked on the home for six years, spending an hour a day at the property working to construct a new home.

The home is 1,500 square foot with hardwood floors throughout with tongue & 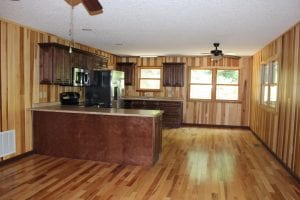 groove walls in the main living area. The home’s spacious kitchen has wood cabinets and is open to the dining and living rooms. The living room is complete with french doors that open to the covered back porch that runs the length of the home.

According to a resolution adopted by the board of education in January 2015, the funds generated from the property will be used to support future CTE activities.

Roof at Highlands School may soon be replaces completely

Since the roof at the Highlands school gym was installed more than a decade ago, it has leaked. Despite continual repairs to the roof by the school system’s maintenance department, the leaking roof and drainage problems began to jeopardize the integrity of the building. School Board Member Stephanie McCall informed the board in December that black mildew is starting to show up in the inside ceiling of the gymnasium. In addition, McCall, who represents the Highlands School district, stated there are gaps in the roof in the weight room through which you can see to the outside.

The roof was constructed in 2005 and according to several experts who have viewed the roof, the problems aren’t with wear and tear but rather faulty workmanship from the beginning. Shenaut Construction, the general contractor for the original project has since gone out of business, and although funds were allocated from the company more than 10 years ago to make up for the poorly done job, those funds were used for repairs.

During a joint meeting with county commissioners in December Macon County School System Consultant Terry Bell informed officials that it would cost anywhere from $175,000 to $200,000 to replace the roof, which is what the school board proposed doing in December. County officials agreed the issue needed to be addressed immediately and asked that in addition to a roof replacement, the school system also look at ways to fix the problem without having to replace the entire roof.

Macon County increased the school system’s capital outlay budget this fiscal year and designated $200,000 to be used for the roof project whether for a repair or a replacement. Mike Watson with Novus Architects surveyed the roof and recommended to school officials that they need to replace the entire roof.

According to Watson’s assessment the roof has an improperly constructed ridge cap that leaks from both rain and lack of insulation. The roof also has improperly constructed and fastened metal roof pans that are mostly 2-3 piece pans and are fastened together and anchored at each end with screws to the roof deck. The installation doesn’t allow for any expansion of the metal and walls out of the screw holes.

“Since repair of the existing screw holes is impossible and concealed conditions of many components are not able to be determined without destructive observation methods and every conceivable method of repairing the roof has already been exhausted, I would recommend that the school system consider replacement of the entire roof including new gutters and downspouts,” said Watson. ‘The existing soffit and fascia could remain as the color can be closely matched.”

School officials took Watson’s recommendation under advisement and informed Tracy Tallent, maintenance supervisor for the district, that after a recommendation from him and his staff is made to the board, it will likely be approved in order to get the project under way.