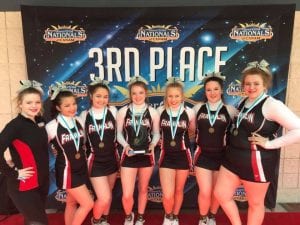 Every practice, every performance, every competition for the past year, was all in preparation for Nationals for both the JV and Varsity Cheerleading teams. After hours on the mat perfecting their routines, both squads made the trip to Nationals in Myrtle Beach, S.C., last month and both came back with titles they could be proud of.

“I am so proud of our athletes for facing fears, overcoming obstacles, and never giving up on their dreams this year,” said JV Coach Lynn Baker. “We had an amazing season and two teams that performed wonderfully at CANAM Nationals. We could not have asked our teams for anything more; they gave top notch performances, were strong competitors, showed unwavering sportsmanship to everyone they came in contact with, and represented Franklin High School and Macon County with class and honor.  These amazing young ladies have bright futures and I’m so honored to have been there to coach them this year.”

The Franklin High School Varsity Squad placed 5th at NCHSAA and 1st at the NCCCA Competition before qualifying for Nationals. While at Nationals, the small squad perfected their routine and placed first in their division against nine other teams and also qualified for the US Finals.

“We made some changes at the varsity level following NCHSAA,” said Franklin Spirit Coordinator Jennifer Turner-Lynn. “We competed at NCHSAA with 13 athletes. Following State and at the conclusion of football season, we created a separate competition team. This allowed athletes to choose whether they wanted to continue with both basketball and competition. Several opted to focus solely on basketball, allowing them an opportunity to focus more on their academic studies, and the rest chose to move forward with State and Nationals.”

Turner-Lynn said FHS may have brought the smallest teams to the competitions they performed at this year, but they showed out in a big way.

“We were the smallest teams in both divisions, with varsity beating teams who had as many as 15 athletes; however, our score out ranked those larger teams by a surprising margin” she said. “At one point, there was as much as 13 point difference between first and second place. We competed with the absolute best team in the nation including a team from Kentucky. Every team in our division worked hard to execute their best performance and we have nothing but respect for the effort each athlete put on the mat.”

This year was more than just another competition; it was history in the making for the Panthers. Franklin High School first went to Nationals during Turner-Lynn’s senior year of high school in 1998. Both JV and Varsity competed in Williamsburg Virginia at an ECA Nationals competition. From 1998, it wasn’t until 2015 that Franklin Varsity went back to Nationals and placed in the top three in their division. In 2016, FHS took a stunt group to Nationals and placed second and last year, only the JV squad attended Nationals and were able to place in the top three in the division.

“Saying I’m proud is an understatement,” said Taylor Rogers, Varsity Coach. “These seven athletes have worked so hard over the past couple of months. I’m so blessed that I was able to be their coach and experience this amazing accomplishment with them. God is so good, and I’m so thankful that these team chose to push through the adversity, become a family, grow in their personal walk with Jesus, and kept their eyes set on what they were determined to do. All the glory goes to God. It was a great way to end our season, 2018 national and state champions.”

The cheer season still isn’t over for two of the Varsity athletes. Kelsy Houston and Teighlor Holland were chosen to attend the USA Cheer Hawaii Collegiate Prep camp in Oahu, Hawaii from June 21-28. This prestigious camp boasts some of the best talent in the nation and typically only accepts about 100 athletes per summer. At the camp, both Houston and Holland will learn instruction from some of the nation’s top college coaches and immerse themselves in learning more about U.S. History and Hawaiian culture.

In order to attend this camp, each athlete has to raise about $4,000 each, which includes the expense of their flight. As of today, both athletes are halfway there.  With the final payments due the first week of May, they are working hard to raise the remainder of the funds.