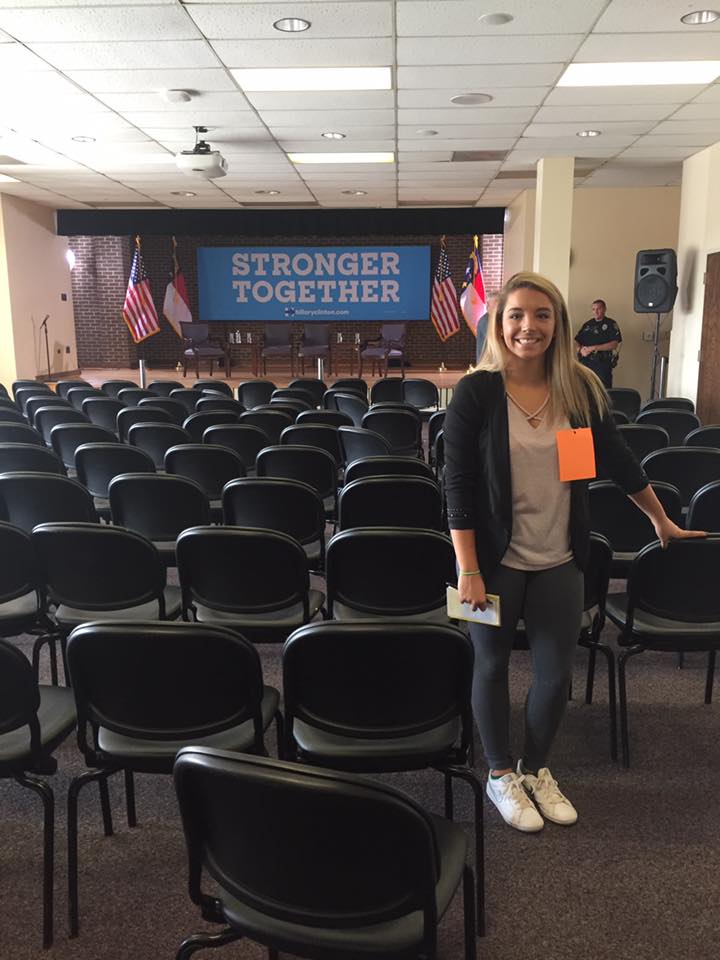 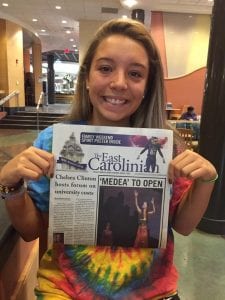 During her fall semester at Franklin High School last year, Mary Katherine Karcher worked with the Macon County News for her senior project. Karcher, who has always been passionate about writing, wanted to learn more about journalism.

Karcher graduated from Franklin High School last year and began her freshman year at East Carolina University this fall and as soon as school got started, Karcher applied to the East Carolinian, the school’s newspaper. From a Panther to a Pirate, Karcher is living out the things she learned during her senior project and is starting her career in journalism.

“I  found out about the candidacy program at The East Carolinian when a staff member came into my Communications class and discussed the program,” said Karcher. “I was really interested because I thought it would be exciting to see if I could make it through the tryout process and actually get a job in my field as a freshman. To my surprise, I did it.”

Karcher is currently majoring in communications with a concentration in Journalism and a minor in Political Science.

“I love it here at ECU, they have a really awesome Communications program and a lot of opportunities for connections and internships for students. Right now I am taking an intro to college writing class, intro to communications, a political science class called international relations, a college advisory class specific to my major, and a health in modern society class that all freshman have to take,” said Karcher. “My favorite classes are definitely the political science and writing class, and I’ve found that those are my strong suits. College is awesome because I can control what I do based on what I think is best for me and my career.” 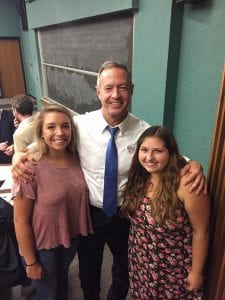 The first part of the tryout process for the candidacy program at the East Carolinian included Karcher and about 40 other people. Candidates were asked to take a test that gauged their knowledge of current events and were then asked to write a mock article with notes the paper provided.

“We were expected to deliver a factual and well written article by deciding what notes were relevant and which ones weren’t,” said Karcher. “After that, about 15 people were chosen for the next step which was an interview with whatever team wanted you. I was interviewed by the Arts and Entertainment team and later that week got an email that I got the position but both the News and the A&E teams wanted me. The paper’s advisor John Harvey pushed me in the direction of the News team so that’s what I ended up choosing.”

Karcher is now a candidate reporter for the News team and The East Carolinian (TEC). “What this means is that I take a weekly journalism class at TEC and perform weekly chores for the paper and I write articles that are either published in the paper or our online site. My chore is passing out papers on campus on Thursdays as a way to promote the paper. So right now I am basically an unpaid intern, but I am also a news reporter for the paper. I won’t become a paid staff writer until next semester, so I guess that’s when it becomes official. The only difference between me and the current staff members are the paychecks.”

In the past two weeks, Karcher has had three articles published with the school’s paper. Karcher covered a visit by former Maryland Governor Martin O’ Malley to ECU as well as a forum hosted by Chelsea Clinton. She also wrote a piece on the ROTC students at the University.

“My favorites so far were the two forums, it was insane that I got to cover those events as a freshman reporter,” said Karcher. “I was in the press section with people from local news stations and papers as well as a team from CNN, and I was on the same playing field as these people, covering the same story and asking the same questions, and that’s when I realized how special this is. After my work on the O’Malley piece, which was a double byline with a staff reporter, I was chosen by the staff members to do the Clinton forum on my own, which was a huge deal to me. My coverage of the forum also made the front page of the paper, which is unbelievable. I never thought that this kind of thing would happen for me as a first semester freshman.”

While still getting her feet wet, Karcher has taken time to appreciate the experience she is being afforded.

“With this job I have already experienced life as a journalist and written articles I would be proud to show any further employer, something I think I am extremely lucky to be able to say,” said Karcher. “As I go to these events and interviews, people don’t treat me as a freshman or even a student, this is a real job with real experience, and it’s made my college experience here at ECU already so much more fulfilling. I’ve come to find that I am really do have what it takes to become a writer and that really motivates me to work and study hard while I’m here. My favorite part about this whole experience is walking to class and seeing people read my published work. I can’t explain that feeling but it’s awesome; those readers know nothing about me except that I’m a news reporter. They don’t realize that front page story was written by a freshman girl whose been at that paper for about three weeks. It makes me proud to see I can hang with the big dogs at the paper, and I appreciate that they want me to succeed and push me to do so.”

Karcher said working with the paper has also taught her about time management, which she thinks is the hardest part so far.

“I had to figure out how to balance everything pretty quick so I could get articles done and move up in the program but if anything that’s what I’ve enjoyed the most as well,” said Karcher. “I plan to become a paid staff member next semester, and I will most likely stay on the news team and work as a full time reporter. I want to pursue News editor or other positions in later semesters and maybe eventually try to become Editor in Chief of the whole paper. I really want to put a lot of focus into this because it honestly is a big deal and it can help me get internships and jobs later on. This candidacy program is one of the best in the nation and it’s things like this that made me choose ECU in the first place. I really want to become a successful journalist and this is helping me further myself as a student and a professional.”