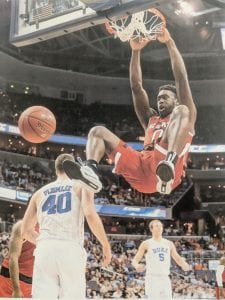 ACC All-Stars and Legends will be making a stop in Franklin as the ACC Barnstorming Tour will be coming to Franklin High School. On April 20, basketball players from UNC, Duke, Wake Forest and NC State will travel to the Panther Den to take on local high school basketball players and alumni on the court.

“I come and look at the schools, so I came up here a couple of months ago,” said Event Coordinator Pet Sumner. “It’s a really great school, a great environment, and it seems like a good small town. Small towns usually do well. We love coming to towns like this. Towns like Franklin are the best to come to because you know it matters to the community.”

Sumner is a part of The Sumner Group who sponsors and promotes The ACC Barnstorming Tour.

In addition to the basketball game, there will be a dunk contest and a three-point shootout. These breaks in the game allow the ACC All-Stars to have fun with the crowd while also showing off their skills on the court.

“The whole point is to have the crowd involved. We want people to come out and enjoy themselves,” said Sumner. “This is my favorite thing to do as part of my job. I think my favorite part is interacting with the guys. You forget what you see on TV. When you sit on the bench you realize they are real people, and you don’t care about the logo on the shirt anymore.” 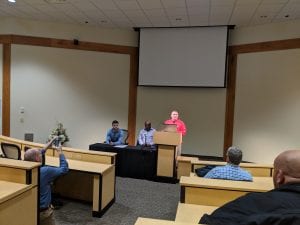 line-up for the basketball game and plans to put three high school seniors from local schools on the court along with Franklin coaches Josh and Jay Brooks and Panther alumni.

The ACC All-Stars will be coached by UNC legend Phil Ford. This will be Ford’s fifth year coaching the All-Stars, and he is as excited as he was when he first started.

“It gives me an opportunity to meet some guys that I normally wouldn’t get the chance to meet,” said Ford. “I’m an ACC basketball fan right now, that’s all I am. For me to have the opportunity, and see the guys from other schools come together in a nice environment, I look forward to it every year. I’m real excited about this year as I think we are going to some super places and we have some super guys on the team. It’ll be fun sitting over there on the bench watching them play.”

“Nolan Smith always helps out, he’s from Duke. He’s our assistant coach, and sometimes he plays if he’s feeling up to it,” said Sumner. “Some of the Duke fans like to see him and he puts on a pretty good show. We’re pretty talented this year. Our roster changes every year so it’s always different. I think the only constant is Nolan and Phil. I think the one thing is that the players know about it. People always ask me if certain players are going to come. We can never guarantee a player can come, because anything can happen. There is nothing we can do about it, but they say they are going to come. Ninety percent of the time every player shows up.”

“It’s a family event, it’s almost like a Globetrotter game feel,” said Sumner. “These guys, you get to watch them relaxed. They interact with the kids. It really is a totally different atmosphere. We have music playing the whole time, a dunk contest, and a three-point contest. I think everyone goes home pretty happy.” 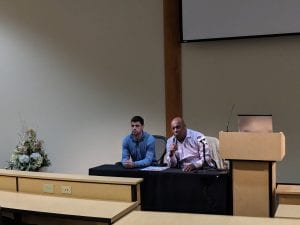 This will mark the 40th year of the ACC Barnstorming Tour, which has traveled with many college basketball legends including Sidney Lowe, Len Bias, Michael Jordan, Tyler Hansbrough, Danny Green, Nolan Smith, Tyler Zeller, and Jackson County native and Smoky Mountain Alumni Jackson Simmons. Simmons’ dad, Si Simmons now coaches for Franklin and was instrumental in setting up the event.

Tickets are on sale now and can be purchased online at carolinabarnstorming.com. Tickets also can be purchased in person at Franklin High School and Macon Middle School. Tickets are $12 in advance, and $15 the day of the game. There is also the option to buy VIP tickets for $50. The VIP tickets include a post-game reception with the ACC All-Stars, front-row seating during the game, and a photograph/autograph session. Doors open at 6 p.m. and the game tips off at 7:30 p.m.